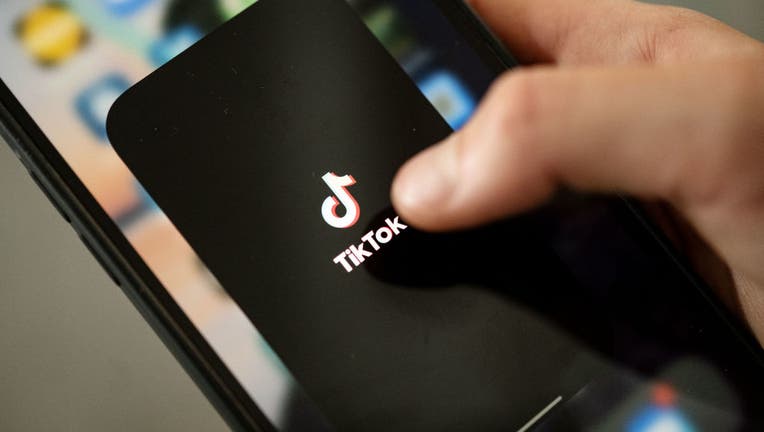 ILLUSTRATION - A teenager taps the TikTok logo on a smartphone. (Photo by Marijan Murat/picture alliance via Getty Images)

TikTok's algorithms are promoting videos about self-harm and eating disorders to vulnerable teens, according to a report published Wednesday that highlights concerns about social media and its impact on youth mental health.

Researchers at the nonprofit Center for Countering Digital Hate created TikTok accounts for fictional teen personas in the U.S., United Kingdom, Canada and Australia. The researchers operating the accounts then "liked" videos about self-harm and eating disorders to see how TikTok's algorithm would respond.

Within minutes, the wildly popular platform was recommending videos about losing weight and self-harm, including ones featuring pictures of models and idealized body types, images of razor blades and discussions of suicide.

When the researchers created accounts with usernames that suggested a particular vulnerability to eating disorders — names that included the words "lose weight" for example — the accounts were fed even more harmful content.

"It’s like being stuck in a hall of distorted mirrors where you’re constantly being told you’re ugly, you’re not good enough, maybe you should kill yourself," said the center's CEO Imran Ahmed, whose organization has offices in the U.S. and U.K. "It is literally pumping the most dangerous possible messages to young people."

Bipartisan push to investigate TikTok's use of user data

Several senators from both political parties have pushed for a potential ban of the social media app, TikTok. Brian Haugli, the CEO of SideChannel joined LiveNOW from FOX's Josh Breslow to discuss the possible cyber security concerns regarding the platform.

Social media algorithms work by identifying topics and content of interest to a user, who is then sent more of the same as a way to maximize their time on the site. But social media critics say the same algorithms that promote content about a particular sports team, hobby or dance craze can send users down a rabbit hole of harmful content.

It's a particular problem for teens and children, who tend to spend more time online and are more vulnerable to bullying, peer pressure or negative content about eating disorders or suicide, according to Josh Golin, executive director of Fairplay, a nonprofit that supporters greater online protections for children.

He added that TikTok is not the only platform failing to protect young users from harmful content and aggressive data collection.

"All of these harms are linked to the business model," Golin said. "It doesn’t make any difference what the social media platform is."

In a statement from a company spokesperson, TikTok disputed the findings, noting that the researchers didn't use the platform like typical users, and saying that the results were skewed as a result. The company also said a user's account name shouldn't affect the kind of content the user receives.

TikTok prohibits users who are younger than 13, and its official rules prohibit videos that encourage eating disorders or suicide. Users in the U.S. who search for content about eating disorders on TikTok receive a prompt offering mental health resources and contact information for the National Eating Disorder Association.

"We regularly consult with health experts, remove violations of our policies, and provide access to supportive resources for anyone in need," said the statement from TikTok, which is owned by ByteDance Ltd., a Chinese company now based in Singapore.

The families of a 9-year-old Wisconsin girl and an 8-year-old Texas girl have filed wrongful death lawsuits against TikTok, claiming their daughters died after participating in TikTok challenges.

The sheer amount of harmful content being fed to teens on TikTok shows that self-regulation has failed, Ahmed said, adding that federal rules are needed to force platforms to do more to protect children.

Ahmed noted that the version of TikTok offered to domestic Chinese audiences is designed to promote content about math and science to young users, and limits how long 13- and 14-year-olds can be on the site each day.

A proposal before Congress would impose new rules limiting the data that social media platforms can collect regarding young users and create a new office within the Federal Trade Commission focused on protecting young social media users ' privacy.

One of the bill's sponsors, Sen. Edward Markey, D-Mass., said Wednesday that he's optimistic lawmakers from both parties can agree on the need for tougher regulations on how platforms are accessing and using the information of young users.

"Data is the raw material that big tech uses to track, to manipulate, and to traumatize young people in our country every single day," Markey said.

CLICK HERE https://afsp.org/risk-factors-and-warning-signs for the warning signs and risk factors of suicide. Call 1-800-273-TALK for free and confidential emotional support.