Two suspects are being sought after leading police on a chase in a stolen vehicle and then fleeing on foot, carjacking two separate vehicles in an apparent attempt to evade authorities.

A two-county police chase finally comes to an end in Orange County, but not before the suspect left a trail of danger that included multiple sideswiping, speeding, and scaring other drivers by traveling the wrong way. SkyFOX was over the scene in Costa Mesa after multiple California Highway Patrol cruisers cornered the suspect and arrested the dangerous driver. Over the course of the chase, the suspect drove through parts of Long Beach, Westminster, Huntington Beach, Newport Beach before surrendering in Costa Mesa. More LiveNOW from FOX streaming video

A two-county police chase finally comes to an end in Orange County, but not before the suspect left a trail of danger that included multiple sideswiping, speeding, and scaring other drivers by traveling the wrong way.

Authorities said the girl was with an 11-year-old boy. Troopers confiscated a firearm, a small amount of marijuana, and drug paraphernalia from the vehicle.

A police chase is underway near downtown Los Angeles.

A driver led officers with the Los Angeles Police Department on a dangerous high-speed chase in Hollywood Thursday afternoon.

A man is behind bars after he led CHP and LASD on a chase across Los Angeles County.

A police chase involving a possible stolen car in rattled drivers trying to get a jump on holiday travel in Los Angeles County. FOX 11's SkyFOX was over the chase scene in the San Gabriel Valley as the suspect lead authorities on a pursuit. Over the course of the chase, the suspect was seen driving recklessly on the freeway, trying to beat the holiday traffic by driving off the road, weaving dangerously around nearby cars and then driving on the wrong side of the road. At one point during the chase, the suspect was spotted pulling over to the side of the road and then dropping off multiple passengers from the car. Officials did not say where the car may have been stolen from.

A suspect takes police on a wild chase throughout the Dallas area. It started on the highway, before the suspect took off on foot, and ultimately was left with no choice but to surrender after a police K9 became involved.

A stolen vehicle suspect in Southern California lead police on a dangerous chase, including breaking into multiple vehicles, backing into a cop car and breaking into someone's house – all to avoid getting in handcuffs. The suspect was eventually cornered by law enforcement at a gas station in San Gabriel Valley. After a brief and tense standoff, the suspect was eventually placed in custody around 6 p.m. Prior to backing into cop cars, trying to break into parked vehicles, driving the wrong way of traffic and swapping multiple vehicles along the way, it is unknown what the suspect was initially wanted for.

A police chase suspect in Southern California lead police on a dangerous, high-speed pursuit that included stealing multiple vehicles, backing into a cop car and breaking into someone's house. The suspect led officers on a chase before being cornered into an apartment complex parking lot. The suspect rammed the police cruiser and escaped. Following that first escape, the suspect was forced to exit the van and run away on foot after crashing the van into multiple cars at a busy intersection. While on foot, the suspect weaved in and out of neighborhoods. The suspect got into an altercation with one family before stealing a white truck from the driveway of their home. The suspect was still on the loose when SkyFOX, the helicopter from FOX 11 Los Angeles, had to refuel.

A police pursuit turned into a standoff with officers in Los Angeles County. SkyFOX from FOX 11 Los Angeles was first over the chase scene through parts of East LA, South Gate and San Gabriel Valley. At one point, the suspect drove over a spike strip, losing multiple tires. The suspect later tried to put the vehicle in reverse after officers had it pinned in a cul-de-sac. The vehicle produced so much smoke it filled the neighborhood street and reduced visibility for police. Shortly after, the suspect was taken out of the vehicle and placed in custody. Officials did not say where the car may have been stolen from.

Police in Mesquite, Texas, were in hot pursuit of a stolen vehicle, with the driver sending them on a wild chase through highways and local roads. At one point the driver plows through a gate before jumping out of the car and taking off. The suspect for a brief time attempted to hide behind an air conditioning unit before deciding to stay moving. The police ultimately took the suspect into custody without incident. 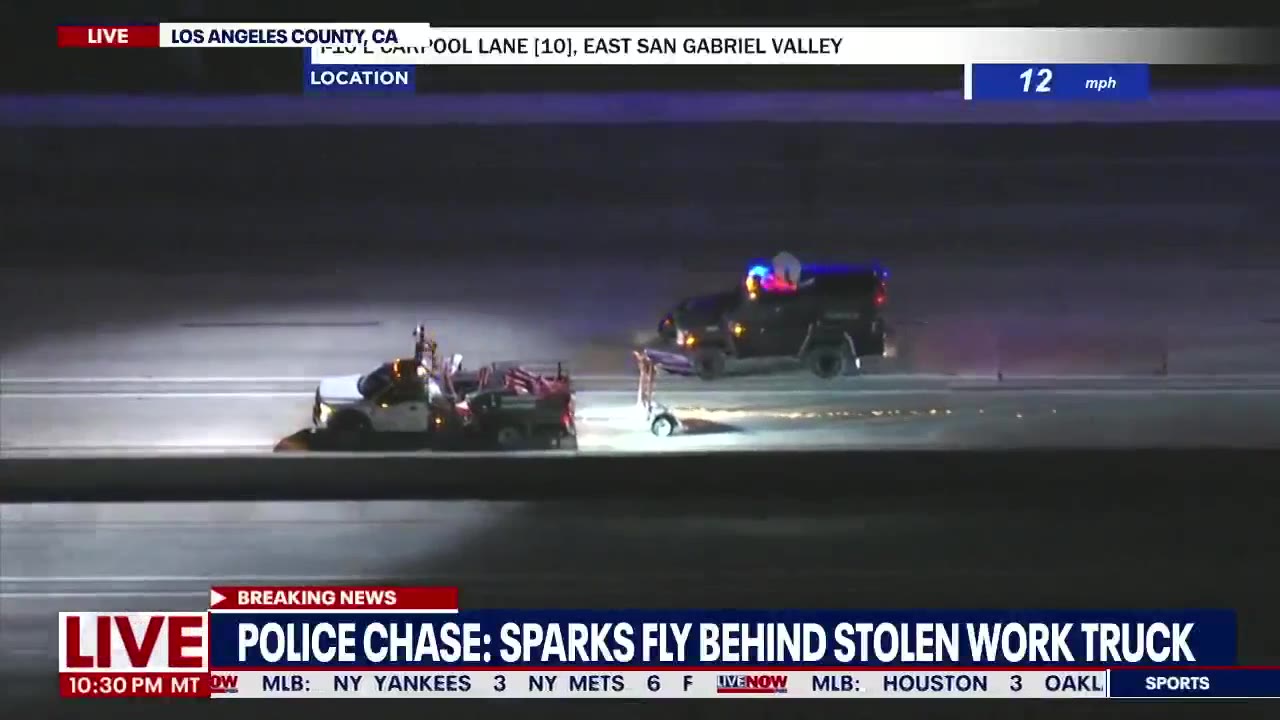 SkyFOX footage captured sparks flying behind a work truck that is believed to be stolen. A vehicle with CalTrans marking led the Fontana Police Department on a chase. Later on in the chase, the Ontario Police Department took over the chase in hopes of getting the suspect to stop. At one point during the chase, the truck left a fiery trail on the 10 Freeway.

The California Highway Patrol and LAPD were forced to pursue a motorcycle driver wanted for speeding in an extended chase that went throughout Los Angeles and included multiple off-road trips to a local park. The driver was taken into custody without incident after a long pursuit

An armed robbery suspect led police on a high speed police chase in Los Angeles. At times the suspect reached speeds of 100 miles per hour before taking to city streets in an effort to evade police

A police chase for a Honda Civic reached high speeds as the suspect weaved in and out of traffic. After reaching a dead end, the suspect fled on foot and tried to carjack another vehicle before being taken into custody.

The California Highway Patrol chased a stolen party bus taken from the San Diego area and leading officers on a high-speed pursuit around Los Angeles. The chase continued for some time before the bus rear-ended another vehicle on the road and the driver was taken into custody.

A suspect in a stolen vehicle in Los Angeles lead police on a bizarre pursuit along wooded areas and dirt roads. At one point the suspect appears to get out of the car, drop his phone, run into a random area, and then get back in the car and keep driving. Police eventually cornered the suspect, who surrendered without incident.