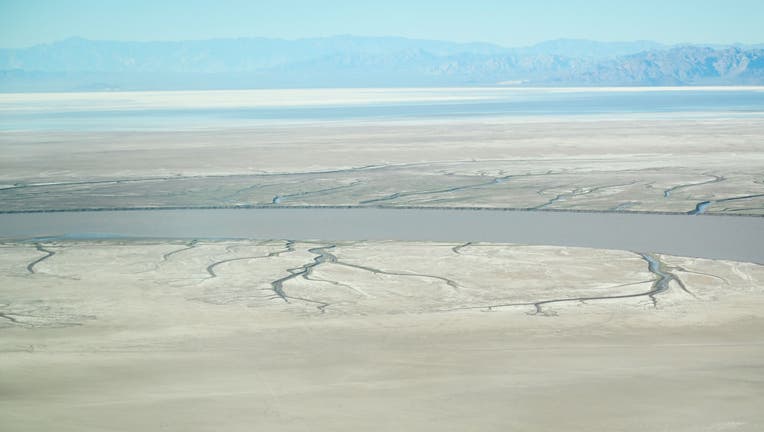 Drought, overconsumption, and climate change, are main factors dissipating the amount of Colorado River water that will reach the Sea of Cortez on its journey through the Colorado River Delta on October 24, 2022 in Baja California, Mexico. The flight

LAS VEGAS (AP) - Living with less water in the U.S. Southwest is the focus this week for state and federal water administrators, tribal officials, farmers, academics and business representatives meeting about the drought-stricken and overpromised Colorado River.

The Colorado River Water Users Association conference, normally a largely academic three-day affair, comes at a time of growing concern about the river's future after more than two decades of record drought attributed to climate change.

"Flows during the past 23-year period … are the lowest in the past 120 years and (among) the lowest in more than 1,200 years," Bunk told the webinar audience. The deadline for public submissions is Dec. 20 for a process expected to yield a final report by summer.

Bunk said the two largest reservoirs on the river — Lake Mead behind Hoover Dam on the Nevada-Arizona state line and Lake Powell formed by the Glen Canyon Dam on the Arizona-Utah line — are at unprecedented low levels. Lake Mead was at 100% capacity in mid-1999. Today it is 28% full. Lake Powell, last full in June 1980, is at 25%.

Scientists attribute extended drought to warmer and drier weather in the West to long-term, human-caused climate change. The effect has been dramatic on a vast river basin where the math never added up: The amount of water it receives doesn't meet the amount that is promised.

Reclamation water managers responded with plans to hold back more water in Lake Powell but warned that Lake Mead water levels would drop.

Meanwhile, bodies have surfaced as Lake Mead's shoreline recedes, including the corpse of a man who authorities say was shot, maybe in the 1970s, and stuffed in a barrel. He remains unidentified. The gruesome discoveries renewed interest in the lore of organized crime and the early days of the Las Vegas Strip, just a 30-minute drive from the lake.

The U.S. Bureau of Reclamation in June told the seven states that are part of the Colorado River Basin — Arizona, California, Colorado, Nevada, New Mexico, Utah and Wyoming — to determine how to use at least 15% less water next year, or have restrictions imposed on them. Despite deadlines, discussions have not resulted in agreements.

Bureau officials use the image of pouring tea from one cup to another to describe how water from Rocky Mountain snowmelt is captured in Lake Powell, then released downriver through the Grand Canyon to Lake Mead. About 70% is allocated for irrigation, sustaining a $15 billion-a-year agricultural industry that supplies 90% of U.S. winter vegetables.

"Due to critically low current reservoir conditions, and the potential for worsening drought which threatens critical infrastructure and public health and safety … operational strategies must be revisited," Bunk said.

This year’s meeting of water recipients begins Wednesday at Caesars Palace on the Las Vegas Strip. The event theme, "A New Century for the Colorado River Compact," marks 100 years since a 1922 interstate agreement divvied water shares among interests in the seven states now home to 40 million people and millions of farmed acres.

Agricultural interests got the biggest share. Native American tribes weren’t included and were referenced in one sentence: "Nothing in this compact shall be construed as affecting the obligations of the United States of America to Indian tribes."

It wasn’t until 1944 that a separate agreement promised a share of water to Mexico.

Today, tribes are at the table and a Mexico delegation is due to attend the conference. U.S. cities that receive river water include Denver, Salt Lake City, Albuquerque, Las Vegas, Phoenix, Los Angeles and San Diego.

Many call conservation crucial. Among conference topic titles are "Messaging in a More Water-Challenged world" and "The Next 100 Years Begins Now."

"The ongoing drought is a stark reminder that water conservation is not just smart planning but an absolute necessity to save the life of the Colorado River," Amelia Flores, chairwoman of Colorado River Indian Tribes, said ahead of the event. The tribal reservation in western Arizona includes more than 110 miles (177 kilometers) of Colorado River shoreline.

Throughout the river basin, warnings have increased and measures have tightened markedly in 2022.

Last month, 30 agencies that supply water to homes and businesses throughout the region joined the Las Vegas area in restricting the planting of decorative lawns that no one walks on.

The four states at the headwaters of the river — Colorado, New Mexico, Utah and Wyoming — also recently announced they plan to ask Congress to let them use federal money through 2026 for a program dubbed "strategic conservation." It would resurrect a 2015 to 2018 pilot program that paid farmers to fallow land to cut water use.

Camille Touton, bureau commissioner, tempered a warning during the water webinars about federal intervention — she called it "moving forward on the initiation of administrative actions" — with a vow to "find a collective solution to the challenges that we face today."

Touton and two top Interior Department officials are scheduled to address the conference on Friday.