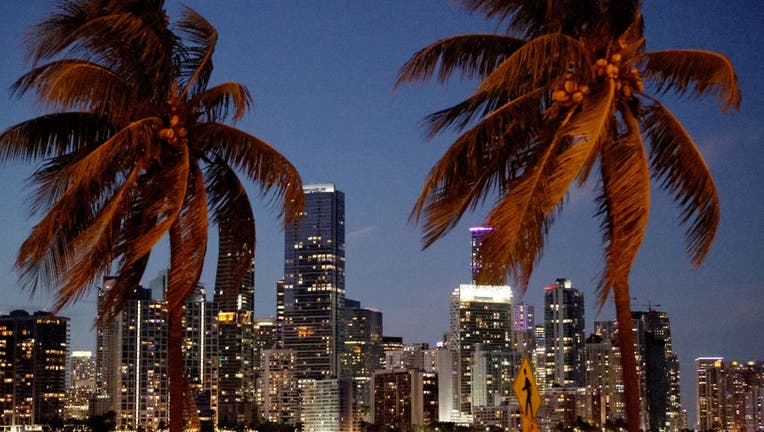 The City of Miami skyline, where many renters reside in the apartment buildings on September 29, 2021 in Miami, Florida. (Photo by Joe Raedle/Getty Images)

And the honor of the fastest-growing state goes to – Florida.

The U.S. Census Bureau recently released data that shows the Sunshine State has grown by 1.9% since 2021.

Many think of the Sunshine State as all sun and beach, but the state has very different weather.

Here's what kind of weather you should expect if you plan to move to Florida.

It shouldn’t come as a surprise that Florida collects most of its rain in the summer. Tropical storms and hurricanes drop incredible amounts of rain in just hours. Take look back at Orlando after Hurricane Ian blew through. Ian left much of Florida underwater.

Sea breezes, a common occurrence in Florida, lead to afternoon thunderstorms too.

As the sun heats up the ground, the warm, humid air rises. With Florida’s high humidity, it doesn’t take long for the moisture to condense into clouds and eventually storms.

WHY DOES FLORIDA HAVE A RAINY SEASON

Pensacola and Fort Lauderdale take the prize for the most amount of rain annually. Both usually see more than 68 inches of rain a year. Fort Myers, Orlando and Jacksonville get over 50 inches per year. Key West sees the least, with only 40.44 inches per year.

If you're picking a city due to the least amount of clouds, Fort Myers should top your list. The city has the fewest amount of cloudy days in the state, averaging 99 days out of the year. Jacksonville is the cloudiest, with 144 cloudy days per year, according to the NCEI.

The number of cloudy days each city in Florida averages yearly:

Summer everywhere in the state hovers around 90 degrees for a high and low of the mid-70s.

Those who have returned to damaged homes and businesses after Hurricane Ian are figuring out the best way to rebuild. Politicians and community leaders in Florida are calling for change on issues like affordable flood insurance, the quality of housing and where to rebuild after so many homes and neighborhoods were washed away by Ian.

It should not come as a surprise that the island city of Key West has the coolest summers and the warmest winters, 89.8 degrees and 66.9 degrees, respectively. They can thank the moderating effect of the surrounding water.

Off the coast of Palm Beach County, the Nature Conservancy has partnered up with the county to rebuild a resilient Island ecosystem. FOX Weather's Brandy Campbell spoke with LiveNOW from FOX's Josh Breslow, as volunteers put on the final touches on the island, which can help water quality and create a habitat for marine life.

These averages vastly differ from the cold snap over the Christmas holidays in 2022. Much of South Florida scrambled for blankets to battle temperatures they had not felt for 30 years. Iguanas fell from trees with the chilly shock. Due to the sudden cold, the spiky, reptiles become stunned by the cold weather and fall from trees.

WHEN DO IGUANAS FALL FROM TREES

The relative humidity percentages did not vary that much between summer and winter.

Annual average relative humidity per city in the morning and afternoon, respectively, according to NCEI:

WHAT IS THE ‘FEELS-LIKE’ TEMPERATURE?

Atlantic and Gulf temperatures warm to 85 and 86 degrees over the summer. The big difference comes when winter arrives.

Key West’s water temperatures only drop to 70.3, while every other city averages around 59 during the winter.

Warm water temperatures don’t only lead to more bathers and spring breakers, though. Bacteria like red tide and flesh-eating bacteria bloom in the tepid Gulf. FOX Weather reported on populations of both taking off after Hurricanes Ian and Nicole.

WHAT IS RED TIDE?

The Orlando metro area is the "lightning capital" of the nation.

Situated about two miles west of Disney's Animal Kingdom resort, lies the area with the greatest lightning density of any neighborhood, registering over 1,200 lightning strikes per square mile.

NEARLY 200 MILLION LIGHTNING STRIKES HIT US IN 2022. HOW MANY HIT YOUR STATE?

Neighborhoods and even bridges to reach barrier islands were destroyed.

HURRICANE SEASON 2022 COMES TO AN END. TAKE A LOOK AT THE SCARS LEFT BEHIND

The state has had more landfalling hurricanes than any other state. More than 40% of all 292 hurricanes that made landfall in the U.S. since 1851 have hit Florida, according to Universal Property.

This is the first time since 1957 that the state was rated as the fastest-growing state. However, people have been moving to Florida at a brisk pace for decades. In fact, more than nine times the number of people now call the Sunshine State home than in 1946.

HOW TO WATCH FOX WEATHER ON TV

"For the third-most-populous state to also be the fastest growing is notable because it requires significant population gains," stated the Census Bureau's report.