Fusion breakthrough at Livermore Lab is a milestone for climate, clean energy

Researchers at the Lawrence Livermore National Laboratory in California for the first time produced more energy in a fusion reaction than was used to ignite it, something called net energy gain. Allie Rasmus reports

The major advance in fusion research announced in Washington on Tuesday was decades in coming, with scientists for the first time able to engineer a reaction that produced more power than was used to ignite it.

Using powerful lasers to focus enormous energy on a miniature capsule half the size of a BB, scientists at the Lawrence Livermore National Laboratory in California started a reaction that produced about 1.5 times more energy than was contained in the light used to produce it.

There are decades more to wait before fusion could one day — maybe — be used to produce electricity in the real world. But the promise of fusion is enticing. If harnessed, it could produce nearly limitless, carbon-free energy to supply humanity’s electricity needs without raising global temperatures and worsening climate change.

At the press conference in Washington, the scientists celebrated.

"Fusion fuel in the capsule got squeezed, fusion reactions started. This had all happened before – 100 times before – but last week for the first time they designed this experiment so that the fusion fuel stayed hot enough, dense enough and round enough for long enough that it ignited," said Adams. "And it produced more energy than the lasers had deposited."

Here’s a look at exactly what nuclear fusion is, and some of the difficulties in turning it into the cheap and carbon-free energy source that scientists hope it can be.

WHAT IS NUCLEAR FUSION?

Look up, and it’s happening right above you — nuclear fusion reactions power the sun and other stars.

The reaction happens when two light nuclei merge to form a single heavier nucleus. Because the total mass of that single nucleus is less than the mass of the two original nuclei, the leftover mass is energy that is released in the process, according to the Department of Energy.

In the case of the sun, its intense heat — millions of degrees Celsius — and the pressure exerted by its gravity allow atoms that would otherwise repel each other to fuse.

Scientists have long understood how nuclear fusion has worked and have been trying to duplicate the process on Earth as far back as the 1930s. Current efforts focus on fusing a pair of hydrogen isotopes — deuterium and tritium — according to the Department of Energy, which says that particular combination releases "much more energy than most fusion reactions" and requires less heat to do so.

HOW VALUABLE COULD THIS BE?

Daniel Kammen, a professor of energy and society at the University of California at Berkeley, said nuclear fusion offers the possibility of "basically unlimited" fuel if the technology can be made commercially viable. The elements needed are available in seawater. 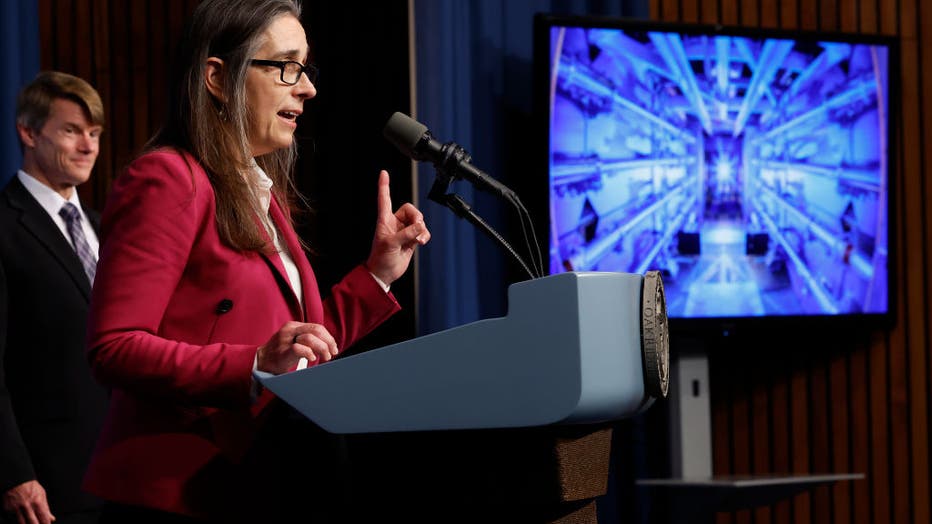 "Of course, now people are thinking, well, how do we go to 10 times more or 100 times more? There’s always some next step," Kuranz said. "But I think that’s a clear line of, yes, we have achieved ignition in the laboratory."

HOW ARE SCIENTISTS TRYING TO DO THIS?

One way scientists have tried to recreate nuclear fusion involves what’s called a tokamak — a doughnut-shaped vacuum chamber that uses powerful magnets to turn fuel into a superheated plasma (between 150 million and 300 million degrees Celsius) where fusion may occur.

The Livermore lab uses a different technique, with researchers firing a 192-beam laser at a small capsule filled with deuterium-tritium fuel. The lab reported that an August 2021 test produced 1.35 megajoules of fusion energy — about 70% of the energy fired at the target. The lab said several subsequent experiments showed declining results, but researchers believed they had identified ways to improve the quality of the fuel capsule and the lasers’ symmetry.

WHY IS FUSION SO HARD?

It takes more than extreme heat and pressure. It also takes precision. The energy from the lasers must be applied precisely to counteract the outward force of the fusion fuel, according to Stephanie Diem, an engineering physics professor at the University of Wisconsin–Madison.

And that’s just to prove net energy gain is possible. It’s even harder to produce electricity in a power plant.

For example, the lab’s lasers can only fire a few times a day. To viably produce energy, they would need to fire rapidly and capsules would need to be inserted multiple times a minute, or even faster, Kuranz said.

Another challenge is to increase efficiency, said Jeremy Chittenden, a professor at Imperial College in London specializing in plasma physics. The lasers used at Livermore require a lot of electrical energy, and researchers need to figure out a way to reproduce their results in a much more cost-effective way, he said.