Cameras atop a communications tower at the St. John the Baptist Parish Sheriff's Office in Louisiana were able to capture a stunning image of a bolt of lightning that struck a parking lot on Wednesday. (Credit: Facebook.com/StJohnParishSheriff / FOX Weather)

ST. JOHN THE BAPTIST PARISH, La - A camera atop a communications tower at the St. John the Baptist Parish Sheriff's Office in Louisiana captured a stunning video of a bolt of lightning that struck a parking lot on Wednesday.

The perfectly-timed recording came as severe weather, including violent tornadoes, was moving across the region.

According to a Facebook post, the lightning bolt struck inside a lot adjacent to the Twin Oaks Nursing Home and across the street from St. Joan of Arch Church in LaPlace.

"We also uplift prayers for our neighbors in St. Charles Parish," the sheriff's office said in the post. 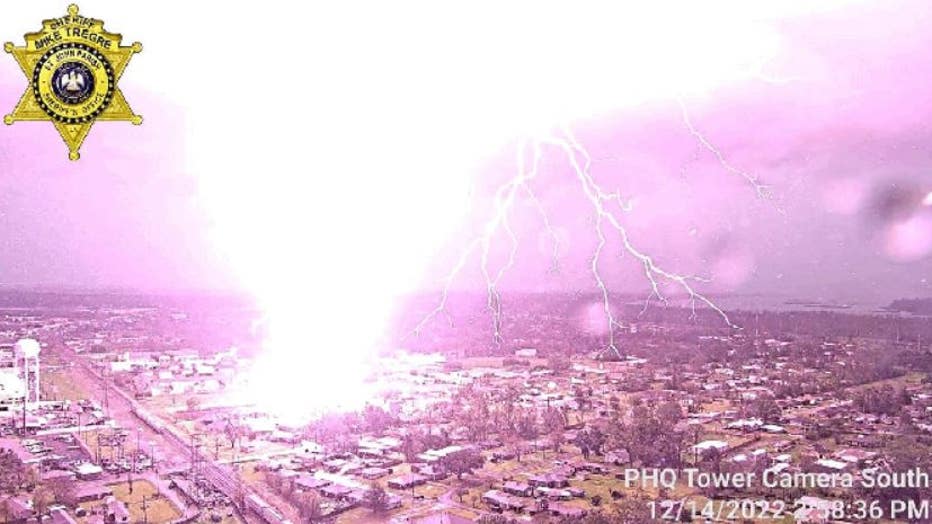 St. Charles Parish was one of the hardest-hit areas where a tornado moved through on Wednesday.

A drone captured incredible video of a tornado moving through New Orleans on Wednesday night.

St. Charles Parish Sheriff Greg Champagne said one woman was killed, and seven others were injured when a possible tornado moved through Killona on Wednesday evening.

"She was outside the residence, so we don't know exactly what happened," he said in a news conference. "All kinds of things could have happened in the debris everywhere. You know, she could have been struck. We don't know for sure."

According to a report from WVUE in New Orleans, the victim was identified as 56-year-old Allison Alexander.

Find the latest updates on this story at FOXWeather.com.