The two minors were taken into custody. Police also said that they were able to recover a "large amount" of jewelry from the scene.

TORRANCE, Calif. - Two suspects are in custody after an smash-and-grab robbery at the Del Amo Fashion Center in Torrance, after Marine recruiters at nearby military recruitment center at the mall jumped into action.

The robbery happened Tuesday, at a jewelry store in the mall. According to Torrance police, four people wearing hoodies and covering their faces used hammers to smash the glass of the display cases and grab as much jewelry as they could.

Two of the suspects were able to escape, but the other two were taken to the ground by Marine recruiters and bystanders who heard the robbery unfold, and were able to detain the two suspects, both minors, until police were able to get there. 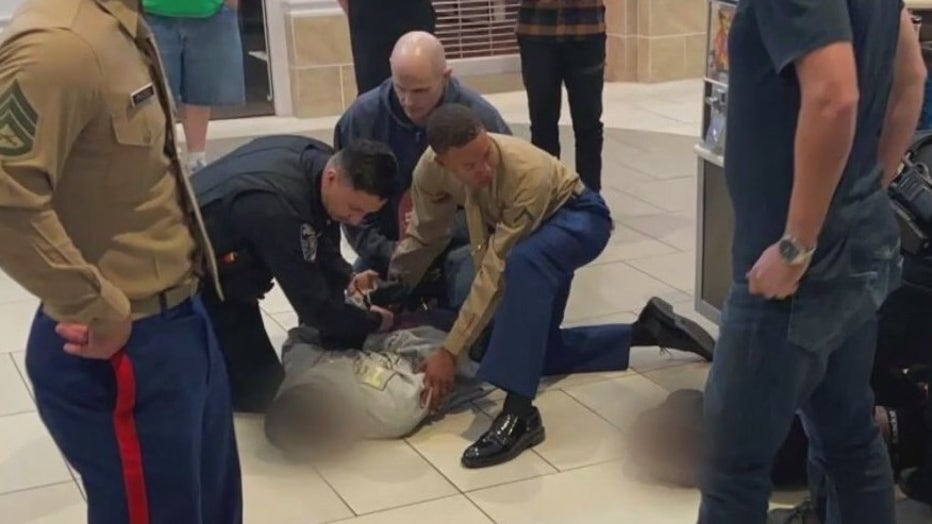 "[It was] the Marines. The Marine Corps… They stepped up, they tackled them down," said Ralph, who captured the robbery on video. "Two got away, two got tackled down, and they stepped it up. That's enough. Time to fight back."

The two minors were taken into custody. Police also said that they were able to recover a "large amount" of jewelry from the scene.