Friday marks Day 4 of voting for next U.S. House Speaker

The vote for Speaker of the House resumes on Friday, marking the fourth day of ballots. LiveNOW from FOX's Josh Breslow spoke with FOX News' Doug Luzader about the vote.

WASHINGTON - Republican Kevin McCarthy has finally clinched enough votes to become House speaker on a historic post-midnight 15th ballot early Saturday, overcoming holdouts from his own ranks and floor tensions boiling over after a chaotic week that tested the new GOP majority’s ability to govern.

After four days of grueling ballots, McCarthy flipped more than a dozen conservative holdouts to become supporters, including the chairman of the chamber’s Freedom Caucus, leaving him just a few shy of seizing the gavel for the new Congress.

As the House resumed for the late night session McCarthy had been on the cusp of victory in the 14th round but he fell one vote short. 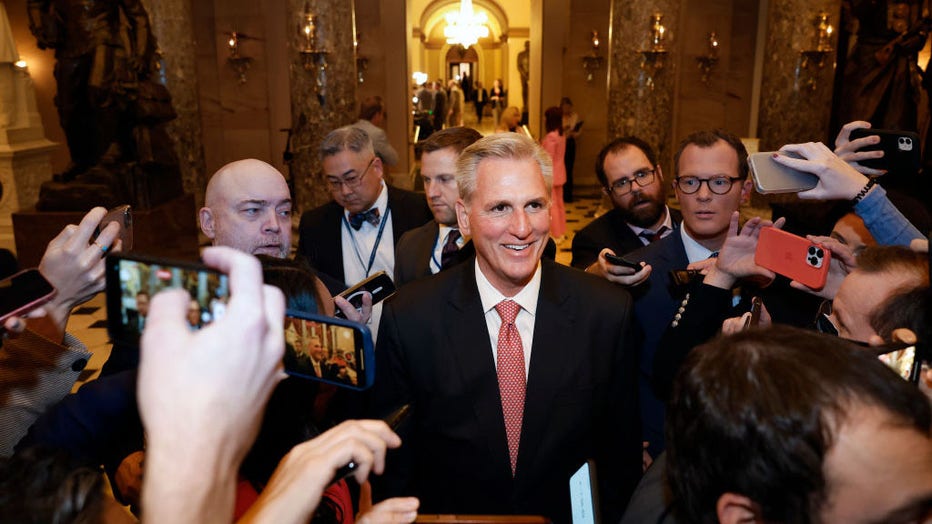 U.S. House Republican Leader Kevin McCarthy (R-CA) talks to reporters as he leaves the House Chamber during the third day of elections for Speaker of the House at the U.S. Capitol Building on Jan. 5, 2023, in Washington, D.C. (Photo by Tasos Katopodi

He strode to the back of the chamber to confront Matt Gaetz, sitting with Lauren Boebert and other holdouts. Fingers were pointed, words exchanged and violence apparently just averted.

At one point, Republican Mike Rogers of Alabama started to charge toward Gaetz before another Republican, Richard Hudson, physically pulled him back.

Republicans quickly moved to adjourn, but then McCarthy rushed forward to switch his vote to remain in session as colleagues chanted "One more time!"

The few Republican holdouts began voting present as well, dropping the tally he needed to finally seize the gavel in what was heading toward a dramatic finish on the fourth long day of a grueling standoff that has shown the strengths and fragility American democracy.

McCarthy had declared to reporters earlier in the day that he believed "we’ll have the votes to finish this once and for all."

House fails to elect speaker for 3rd day in a row

The House adjourned for a third day without a speaker as Republicans' clash over Kevin McCarthy drags on.

The day's stunning turn of events came after McCarthy agreed to many of the detractors' demands -- including the reinstatement of a longstanding House rule that would allow any single member to call a vote to oust him from office.

Even if McCarthy is able to secure the votes he needs, he will emerge as a weakened speaker, having given away some powers and constantly under the threat of being booted by his detractors.

But he could also be emboldened as a survivor of one of the more brutal fights for the gavel in U.S. history. Not since the Civil War era has a speaker's vote dragged through so many rounds of voting.

The showdown that has stymied the new Congress came against the backdrop of the second anniversary of the Jan. 6, 2021, attack on the Capitol, which shook the country when a mob of then-President Donald Trump’s supporters tried to stop Congress from certifying the Republican’s 2020 election defeat to Democrat Joe Biden.

At a Capitol event on Friday, some lawmakers, mostly Democrats, observed a moment of silence and praised officers who helped protect Congress on that day. And at the White House, Biden handed out medals to officers and others who fought the attackers.

RELATED: 14 times Congress couldn’t decide on a House speaker after the 1st-round vote

"America is a land of laws, not chaos," he said.

At the afternoon speaker's vote, a number of Republicans tiring of the spectacle temporarily walked out when one of McCarthy's most ardent challengers railed against the GOP leader.

Contours of a deal with conservative holdouts who have been blocking McCarthy's rise emerged after three dismal days and 11 failed votes in an intraparty standoff unseen in modern times.

One significant former holdout, Republican Scott Perry, chairman of the conservative Freedom Caucus who had been a leader of Trump's efforts to challenge the 2020 election, tweeted after his switched vote for McCarthy: "We're at a turning point."

Another Republican holdout, Byron Donalds of Florida, who was repeatedly nominated as an alternative candidate for speaker, switched on Friday, too, voting for McCarthy.

House Democrats have chosen Hakeem Jeffries to replace Nancy Pelosi in leadership. LiveNOW from FOX's Josh Breslow spoke with Dr. Darryl Paulson at the University of South Florida to break down the party's future.

Trump may have played a role in swaying the holdouts. Donalds said he had spoken to the former president who had been urging Republicans to wrap up their public dispute the day before.

As Rep. Mike Garcia nominated McCarthy for Friday, he also thanked the U.S. Capitol Police who were given a standing ovation for protecting lawmakers and the legislative seat of democracy on Jan. 6.

But in nominating the Democratic leader Hakeem Jeffries, Democrat Jim Clyburn recalled the horror of that day and told his colleagues: "The eyes of the country are on us today," he said.

Without a speaker, the chamber is unable swear in members and begin its 2023-24 session, a sign of the difficulty ahead for the new Republican majority as it tries to govern.

Electing a speaker is normally an easy, joyous task for a party that has just won majority control. But not this time: About 200 Republicans have been stymied by 20 far-right colleagues who said he’s not conservative enough.

The disorganized start to the new Congress pointed to difficulties ahead with Republicans now in control of the House, much the way that some past Republican speakers, including John Boehner, had trouble leading a rebellious right flank. The result: government shutdowns, standoffs and Boehner’s early retirement when conservatives threatened to oust him.

The agreement McCarthy presented to the holdouts from the Freedom Caucus and others centers around rules changes they have been seeking for months. Those changes would shrink the power of the speaker’s office and give rank-and-file lawmakers more influence in drafting and passing legislation.

At the core of the emerging deal is the reinstatement of a House rule that would allow a single lawmaker to make a motion to "vacate the chair," essentially calling a vote to oust the speaker. McCarthy had resisted allowing a return to the longstanding rule that former Speaker Nancy Pelosi had done away with, because it had been held over the head of past Republican Speaker Boehner. But it appears McCarthy had no other choice.

Other wins for the holdouts are more obscure and include provisions in the proposed deal to expand the number of seats available on the House Rules Committee, to mandate 72 hours for bills to be posted before votes and to promise to try for a constitutional amendment that would impose federal limits on the number of terms a person could serve in the House and Senate.

What started as a political novelty, the first time since 1923 a nominee had not won the gavel on the first vote, has devolved into a bitter Republican Party feud and deepening potential crisis.

Before Friday's ballots, Democratic leader Jeffries of New York had won the most votes on every ballot but also remained short of a majority. McCarthy ran second, gaining no ground.

The longest fight for the gavel started in late 1855 and dragged on for two months, with 133 ballots, during debates over slavery in the run-up to the Civil War.