Judge Peter Cahill sentenced former Minneapolis police officer Derek Chauvin to 22.5 years in prison for the murder of George Floyd. Chauvin will get credit for 199 days served in prison.

At Derek Chauvin's sentencing hearing, the former Minneapolis, Minnesota, police officer appeared before the judge and offered his condolences to George Floyd's family. Chauvin also hinted at more to come, saying, "there's going to be some other information in the future that would be of interest and I hope things will give you some peace of mind. Thank you."

Eric Nelson, the attorney for former Minneapolis police officer Derek Chauvin, spoke during the sentencing phase of the trial. He spoke of the good that Chauvin had done in his community. Chauvin has been convicted in the murder of George Floyd on May 25, 2020.

Derek Chauvin's mother Carolyn Pawlenty appeared before the judge to make a statement during the former officer's sentencing for the death of George Floyd. Pawlenty said her son is not a racist and a good man who dedicated his life to the police department. "When you sentence my son, you will also be sentencing me," she told the judge. 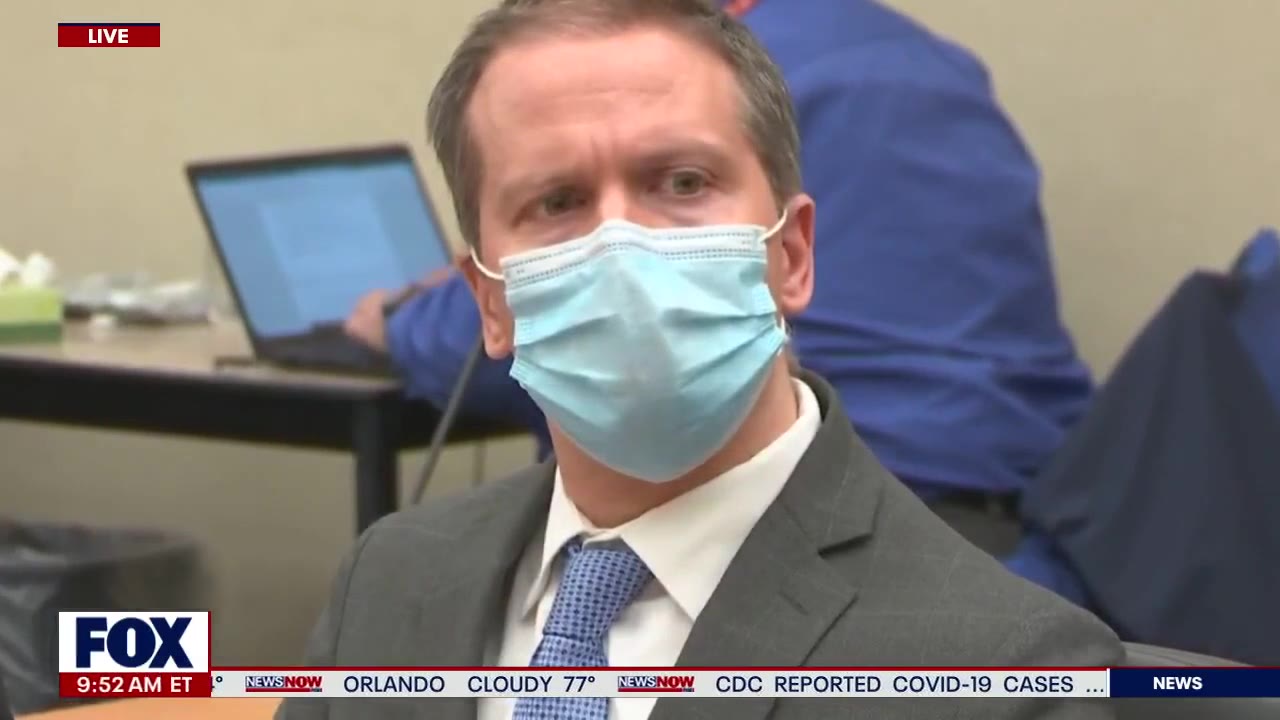 Derek Chauvin, the former Minneapolis police officer convicted of murder and manslaughter in George Floyd’s death, returns to court Friday where he could be sentenced for up to 30 years in prison.

The trial for the three former Minneapolis police officers charged in the death of George Floyd is being postponed until March 2022 to allow the federal case against them and Derek Chauvin to proceed first, Judge Peter Cahill ruled Thursday. Tou Thao, Thomas Lane and J. Alexander Kueng are all charged with aiding and abetting second-degree murder and aiding and abetting second-degree manslaughter. Their trial was originally scheduled to begin on Aug. 23.

Ex-Minneapolis police officer Derek Chauvin has filed a motion seeking a new trial in the death of George Floyd, arguing that his constitutional right to a fair trial was violated multiple times throughout the proceedings. Defense attorney Eric Nelson took issue with the judge’s refusal to grant a change of venue and the decision to not sequester jurors during the trial, among other things in a 10-point post-verdict filing. "The cumulative effect of the multiple errors in these proceedings deprived Mr. Chauvin of a fair trial, in violation of his constitutional rights," the filing reads.

Former Minneapolis police Officer Derek Chauvin has been convicted of murder and manslaughter in the death of George Floyd, the explosive case that triggered worldwide protests, violence and a furious reexamination of racism and policing in the U.S. The jury reached its verdict Tuesday after deliberating about 10 hours over two days in a city on edge against another outbreak of unrest. Floyd died last May after Chauvin, a white officer, pinned his knee on or close to the 46-year-old Black man's neck for about 9 1/2 minutes. The verdict, arrived at after about 10 hours of deliberations over two days, was to be read late in the afternoon in a city on edge against the possibility of more unrest like that that erupted last spring. The jury, made up of six white people and six Black or multiracial people, weighed charges of second-degree unintentional murder, third-degree murder and second-degree manslaughter, with convictions on some, none or all of the charges possible. The most serious charge carries up to 40 years in prison.

President Joe Biden speaks out about the ongoing trial of Derek Chauvin in Minneapolis, MN.

Defense Attorney Eric Nelson contends 3 critical things happen at that moment including George Floyd taking his final breath & officer Derek Chauvin pulling out his mace to threaten the crowd. "And that changed officer Chauvin's perception of what was happening."

Derek Chauvin will invoke his 5th Amendment right against self-incrimination and will not testify at his trial. Jurors will be read instructions that they shouldn’t infer Chauvin’s guilt or innocence based on his decision to stay silent; the prosecution is now expected to call rebuttal witnesses.

2019 FLOYD ARREST: Officer Creighton testifies encounter with #GeorgeFloyd escalated quickly with him having to draw his service weapon. Here is some additional footage of the arrest from its initial public evidence release.

The state will continue to call witnesses and experts to the stand Wednesday to testify in the trial of Derek Chauvin, the former Minneapolis police officer charged in the death of George Floyd. Chauvin is charged with third-degree murder, second-degree murder and second-degree manslaughter in Floyd’s death last May. The trial is being broadcast live, gavel to gavel, on FOX 9 and streaming live at fox9.com/live. Court is expected to resume around 9:15 a.m. after adjourning around 3:15 p.m. on Tuesday when Hennepin County Judge Peter Cahill indicated there may be a legal issue that needs to be addressed with the state’s use of force expert, Sgt. Jody Stiger of the Los Angeles Police Department.

Chief Arradondo is expected to be a key witness for the prosecution, who in the past has commented on the case, calling George Floyd's death a "murder" and writing that Chauvin should have known better than to keep his weight on. But, the chief will be limited on speaking on some subjects, including what factored into the decision to fire Chauvin.

Chief Arradondo is expected to be a key witness for the prosecution, who in the past has commented on the case, calling George Floyd's death a "murder" and writing that Chauvin should have known better than to keep his weight on. But, the chief will be limited on speaking on some subjects, including what factored into the decision to fire Chauvin.

Day 3 of the Derek Chauvin trial brought emotional testimony and police bodycam footage of the arrest of George Floyd. Floyd says he's claustrophobic before refusing to get into the police vehicle.

Judge Cahill called a 10 minute break as witness Charles McMillian is overcome with emotion after watching police body camera footage of George Floyd struggle with police. McMillian mentioned something about his mom dying when Cahill cut him off.

Cup Foods surveillance video continues to capture George Floyd hanging in the store, interacting with various people. He is walking in & out of frame. Prosecutor is asking Martin, the witness to identify various people including the store manager.

The trial of Derek Chauvin, the former Minneapolis police officer charged in the death of George Floyd, officially began Monday with opening statements. The trial is being broadcast live, gavel to gavel, on NewsNOW from FOX.