Rapper Gunna out of jail after pleading guilty in RICO case

Rapper Gunna walked out of the Fulton County Jail after pleading guilty to a racketeering conspiracy charge. Authorities arrested him and fellow rapper Young Thug along with more than two dozen others earlier this year. Gunna's guilty plea does not necessarily mean he's admitting guilt.

ATLANTA - Atlanta rapper Gunna walked out of the Fulton County Jail on Wednesday afternoon after pleading guilty to a charge in the RICO Act case filed against him and dozens of other alleged associates.

Gunna, whose legal name is Sergio Kitchens, and Young Thug, whose name is Jeffrey Williams, are two of the defendants indicted for charges in violation of the RICO Act. The indictment claims they are part of a gang known as Young Slime Life or YSL. Prosecutors allege those named in the indictment have engaged in violent criminal activity in the city for years.

Attorneys for Gunna said Kitchens, in exchange for guilty plea, will not serve any time in prison. The plea deal sentenced him to five years with one year to serve in prison. That time was commuted to time served, and the balance was suspended. He will need to complete 500 hours of community service, with 350 of those hours speaking to young men and women in the community about the dangers of gangs and gang violence.

Atlanta rapper Gunna walks out of the Fulton County Jail after pleading guilty in a RICO case on Dec. 14, 2022.

The entire sentenced will be terminated after he completes his community service. 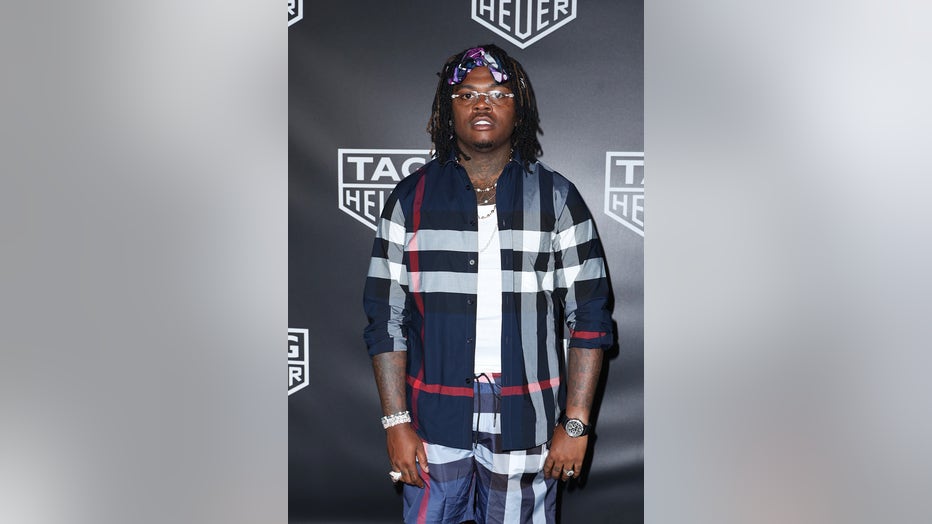 Gunna attends the TAG Heuer Miami Prix at Jungle Plaza on May 7, 2022 in Miami, Florida. (Photo by John Parra/Getty Images for TAG Heuer)

Fulton County Superior Court Chief Judge Ural Glanville also ruled he is not to have any contact with his co-defendants. They said, if called by any party in the case, he must testify truthfully, but can also reserve the right to invoke his Fifth Amendment rights

In a statement, Gunna did not admit guilt and claimed he was pleading guilty in his best interest:

"When I became affiliated with YSL in 2016, I did not consider it a "gang"; more like a group of people from metro Atlanta who had common interests and artistic aspirations.

"My focus of YSL was entertainment - rap artists who wrote and performed music that exaggerated and "glorified" urban life in the Black community.

"While I have agreed to always be truthful, I want to make it perfectly clear that I have NOT made any statements, have NOT been interviewed, have NOT cooperated, have NOT agreed to testify or be a witness for or against any party in the case and have absolutely NO intention of being involved in the trial process in any way.

"I have chosen to end my own RICO case with an Alford plea and end my personal ordeal by publicly acknowledging my association with YSL. An Alford plea in my case is the entry of a guilty plea to the one charge against me, which is in my best interest, while at the same time maintaining my innocence toward the same charge. I love and cherish my association with YSL music, and always will. I look at this as an opportunity to give back to my community and educate young men and women that "gangs" and violence only lead to destruction."

Around 5 p.m., Kitchens walked out of the Fulton County Jail and into an SUV waiting for him outside.

Prosecutors claim Williams is a co-founder of the alleged street gang YSL. The indictment also gives a detailed account of various violent crimes alleged members of YSL are accused of, and documents social media posts and rap lyrics by Williams that reference YSL.

The RICO trial for all the defendants was schedule to start after the first of the year.

What is an Alford plea?

An Alford plea, also sometimes known as the Kennedy plea, Alford guilty plea, Alford doctrine, and "best-interests plea," is a type of guilty plea in criminal court that gives weight to evidence. It allows a defendant to continue to assert their innocence and not admit to a criminal act, while conceding the evidence against them would likely lead to a conviction.

The plea also allows the defendant to skip a trial and just accept the consequences associated with a guilty plea.

This plea is unlike a nolo contendere plea in that I can be used against a defendant in civil actions and future court proceedings.