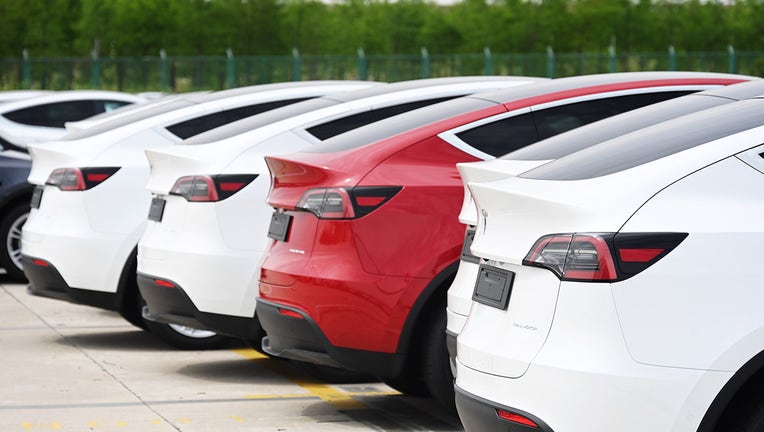 File: Tesla Model Y and Model 3 electric vehicles wait to be loaded on board a cargo vessel at Nangang port on May 15, 2022 in Shanghai, China. (Photo by Shen Chunchen/VCG via Getty Images)

DETROIT - Tesla Inc. is offering rare discounts through year's end on its two top-selling models, an indication that demand is slowing for its electric vehicles.

The Austin, Texas, company started offering a $3,750 incentive on its Model 3 sedan and Model Y SUV on its website earlier this month, but on Wednesday doubled the discount to $7,500 for those who take delivery between now and Dec. 31.

The move comes ahead of a new federal tax credit of up to $7,500 that's scheduled to take effect Jan. 1. Teslas weren't eligible for a previous federal tax credit program because the company had reached a limit of 200,000 vehicles sold. Next year's credits don't have such a limit.

"This is a sign of demand cracks and not a good sign for Tesla heading into the December year-end," Wedbush analyst Dan Ives said in an e-mail. "EV competition is increasing across the board, and Tesla is seeing some demand headwinds."

Lower priced versions of the Models 3 and Y will be eligible for the federal tax credit come January due to limits on vehicle purchase prices outlined in the Inflation Reduction Act.

In a regulatory quirk, many vehicles like Teslas that are made in North America likely will be eligible for the full $7,500 tax credit from January into March because the Treasury Department is still working on rules requiring battery minerals and parts to come from North America. It’s likely that most of the vehicles will only be eligible for half the credit once the rules come out in March.

Tesla may be offering the discounts to juice sales before the end of the year in an effort to meet a pledge to grow vehicle sales by 50%.

On the company's third-quarter earnings conference call in October, Tesla CFO Zachary Kirkhorn said Tesla will fall just short of its 50% sales growth target. But he later was contradicted by CEO Elon Musk.

To reach the 50% sales growth target, Tesla must have a stellar performance in the fourth quarter.

Through September the company delivered 908,573 vehicles, compared with just over 936,000 vehicles a year ago. To increase sales by 50% over last year, which would amount to about 1.4 million vehicles, the company would have to sell more than 490,000 vehicles in the fourth quarter.

Tesla shares have lost more than 60% of their value since Musk announced in April that he had taken a large stake in Twitter. They fell 6.6% in Thursday morning trading to a new two-year low of $127.70. Eventually Musk bought the social media site, and investors are worried about demand and that the CEO has been distracted from the car company.

Musk said this week that he plans to remain as Twitter’s CEO until he can find someone willing to replace him in the job.

RELATED: Here's how much range electric vehicles lose in the cold