How much plastic is in your dinner?

Researchers say we could be ingesting close to a quarter of a million plastic particles when we sit down for Christmas dinner. FOX's Marianne Rafferty reports.

Plastic is everywhere, and it can break down into tiny pieces called microplastics — ending up in the ocean, drinking water, and perhaps your upcoming holiday meal, according to new research.

Microplastics are defined as small plastic pieces that are less than 5 millimeters in length, or about the size of a sesame seed. Each year, Americans consume tens of thousands of these tiny particles that come from food, water, and even the air. But it remains unclear what kind of harmful, long-term impacts microplastics can bring on human health.

RELATED: Non-stick pans could be releasing millions of tiny plastic particles into your food, study finds

Recently, scientists at the University of Portsmouth in England partnered with Good Morning Britain for an experiment analyzing the level of microplastics in a traditional roast chicken and various sides like potatoes, carrots, and broccoli. One meal was made with ingredients that had all been bought wrapped in plastic, while the second meal was made up of items all purchased loosely and without any plastic packaging. 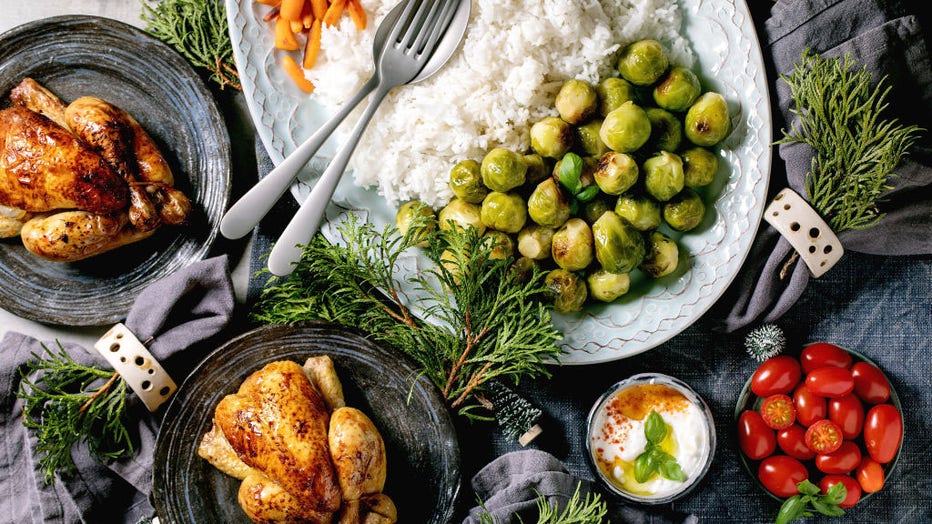 "From the results, it would appear that the majority of microplastics in our food come from the plastic packaging it is wrapped in," Coucerio said in a statement. "However, there are other ways that plastic can enter the food chain."

This particular experiment was conducted in a "normal kitchen," rather than a sterile laboratory, "so it is likely the microplastics will come from a combination of within the food, the packaging, cooking utensils, and the air."

"It could be getting into the vegetables through the soil or into our meat through grazing," Coucerio added. "Air has lots of microplastics in it too, so they could be falling on top of the food and finally, it could be from the cooking utensils used when preparing a meal," she continued.

Based on the results of the experiment, Courcerio said if a person were to eat one pre-made meal wrapped in plastic every night for a year, they’d be ingesting about 10 grams of plastic — which is the equivalent of two plastic bags a year.

Microplastics are pieces of plastic that measure less than 5 millimeters and these tiny particles are finding their way into our drinking water, food, and even our blood.

Professor Shaji Sebastian, a gastroenterologist consultant with Hull University Teaching Hospital in England, called the results of the recent roast chicken dinner investigation "surprising" and noted how more research is urgently needed on the impact of microplastics on the human body.

"The key is to understand, what are microplastics doing to the body? Do they go to the organs? For example, do they cross the barrier between the blood and the brain?" Sebastian said in a statement. "If it is launched in the intestine, which is my area of interest, is it going to stimulate some problems or inflammation which may lead on to disease down the line? These are critical questions, which we need to answer."

Earlier this year, researchers documented evidence of microplastics found in human blood for the first time. A study, published in March in the journal Environment International, detailed how 17 out of the 22 healthy, non-fasting volunteers tested positive for microplastics in their blood.

Many of the samples contained PET plastic, which is commonly used for packaging food and drinks. The samples were also found to contain polystyrene, another widely-used plastic for a variety of consumer products, and polyethylene, used in the production of items like plastic grocery bags.