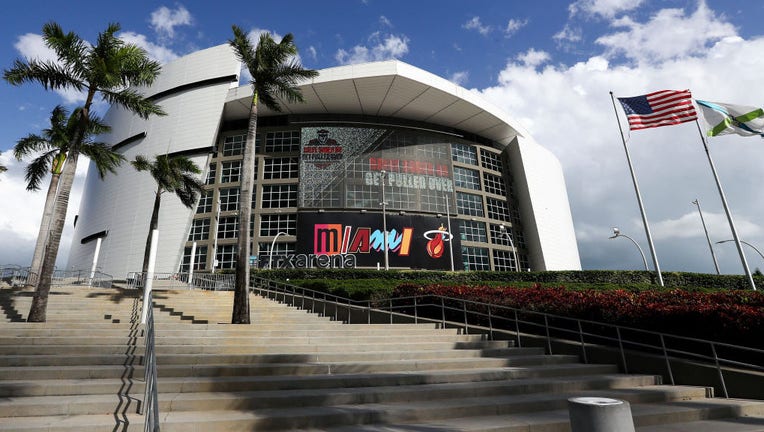 FILE IMAGE - An exterior view of FTX Arena prior to a game between the Boston Celtics and Miami Heat at FTX Arena on Oct. 21, 2022, in Miami, Florida. (Photo by Megan Briggs/Getty Images)

MIAMI - The naming rights deal between FTX and Miami-Dade County was terminated Wednesday by a federal bankruptcy court, a move that allows the collapsed cryptocurrency exchange's brand to be stripped from the arena where the NBA’s Miami Heat play.

The order means that before long — and probably starting very soon — all FTX signage and advertising at the arena will be removed. There was no immediate word from the Heat or the county on when the process will begin.

That will be a massive undertaking. There is FTX branding on the arena's roof, on the basketball court, over many of the entrances, on the polo shirts worn by security personnel and even on many of the electronic cards employees use to gain access to the facility.

Terminating the rights deal "shall be effective immediately upon entry of this order," U.S. Bankruptcy Judge John T. Dorsey wrote.

The county asked for the naming rights deal to be terminated in November, saying at the time that continuing to refer to the building as FTX Arena will only add to the "enduring hardships" brought on by the collapse of the cryptocurrency exchange.

The county owns the arena and negotiated what was to be a 19-year, $135 million naming rights deal with FTX. The Heat were to receive $2 million annually as part of that deal, which went into effect in June 2021.

FTX’s next payment due to the county was to have been $5.5 million on Jan. 1.

FTX founder, Sam Bankman-Fried was released on a $250M bond and is under house arrest at his parents' home in California. LiveNOW from FOX's Josh Breslow spoke with Aaron Kaplan, a securities attorney, about the latest on the case.

FTX was the third-largest cryptocurrency exchange, though it ended up with billions of dollars' worth of losses — estimates range from $8 billion to $10 billion — before seeking bankruptcy protection after a spectacular crash that took only a few days.

Its founder, Sam Bankman-Fried, 30, was arrested last month in the Bahamas and extradited to the U.S. to face criminal charges in what U.S. Attorney Damian Williams has called "one of the biggest frauds in American history." Bankman-Fried has been released on bail and is scheduled to go on trial in October.