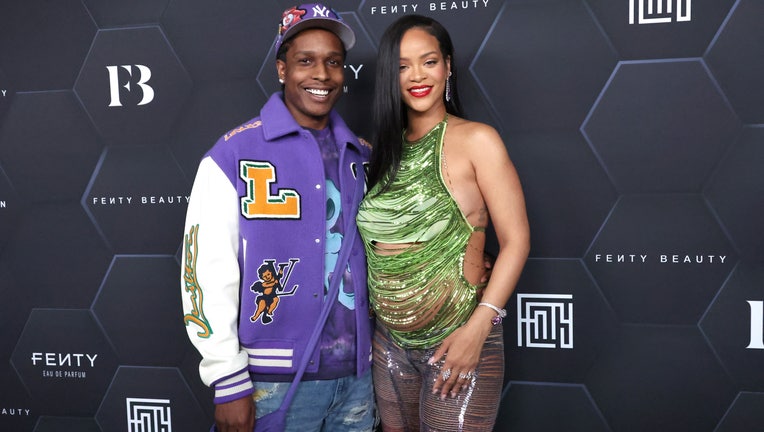 SAP Rocky and Rihanna pose for a picture as they celebrate her beauty brands Fenty Beauty and Fenty Skinat Goya Studios on February 11, 2022 in Los Angeles, California. (Photo by Mike Coppola/Getty Images)

Rihanna is showing off her baby boy for the first time.

The superstar entertainer, who welcomed the baby with boyfriend A$AP Rocky in May, shared a video on TikTok Saturday — her first on the social media site — showing a smiling, adorable baby in a car seat.

The couple revealed her pregnancy with a belly-baring Harlem photo shoot in January. She hasn’t revealed the baby’s name.

During her pregnancy, Rihanna stunned in designer looks that showed off her growing bump, but her pregnancy wasn't drama free.

The 33-year-old A$AP was arrested April 20 at Los Angeles International Airport in connection with a shooting in Hollywood last year, authorities said. The rapper, whose real name is Rakim Mayers, was accused of firing a handgun at an acquaintance, who sustained a minor injury and later sought medical treatment, police said. He pleaded not guilty in August and remains free on a $550,000 bond.

The two went public with their relationship in 2020.