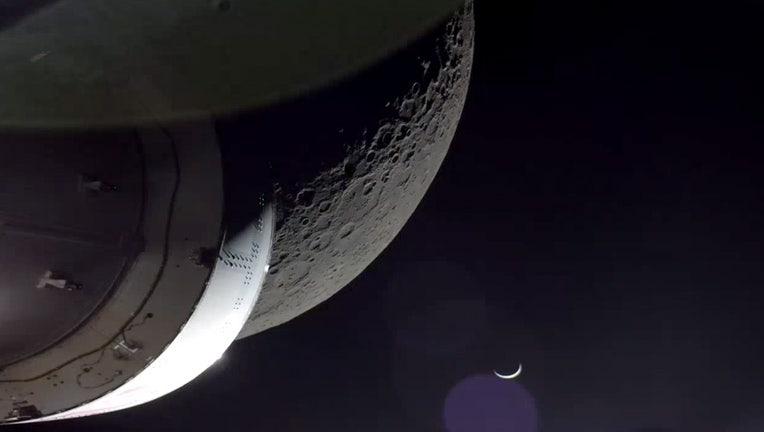 The view of Earthrise next to the moon from NASA's Orion spacecraft on Dec. 5, 2022 as it emerges from behind the moon. The spacecraft completed a return powered flyby burn, swinging around the moon and beginning its journey back to Earth. (Image: NA

NASA's Orion spacecraft zoomed behind the moon once more, providing stunning views again of Earth and our planetary neighbor, before firing up its engines Monday to set it on course for Earth in the final stages of the Artemis 1 mission.

Orion made its final close approach to the moon Monday, traveling around 4,800 mph as it swept by the far side of the lunar surface. After Orion completed its final flyby, the spacecraft cameras captured Earth rising on the horizon and as it swung around the moon.

The NASA spacecraft has a suite of cameras that have been streaming back views of the moon and Earth since the spacecraft launched on Nov. 16 from NASA's Kennedy Space Center.

At 11:43 a.m. EST, the spacecraft completed a successful return-powered flyby (RPF) burn when the orbital maneuver engine fired for 3 minutes and 27 seconds, putting Orion on the correct trajectory to splashdown in the Pacific Ocean on Dec. 11 after 25.5 days in space.

Managers in Mission Control at Johnson Space Center in Houston all polled "Go" to conduct the burn about 20 minutes before the planned milestone.

Watch the replay before the flyby below:

The final lunar flyby brought Orion about 80 miles from the moon's surface, and NASA managers say the spacecraft flew over some of the Apollo landing sites.

Prior to the flyby, NASA lost communication with Orion for about 30 minutes when it was on the far side of the moon.

When the signal was restored with the Deep Space Network, Orion's view of the lunar craters and features, as well as its destination Earth was breathtaking. The next time this view is available, it will be as NASA astronauts complete the same orbit around the moon during Artemis II.

Orion must complete a series of engine burns to return to Earth. The first happened last week, with a 45-second distant retrograde orbit (DRO) departure burn, setting the spacecraft up to begin its flight home.

The spacecraft is now homeward-bound for Earth. 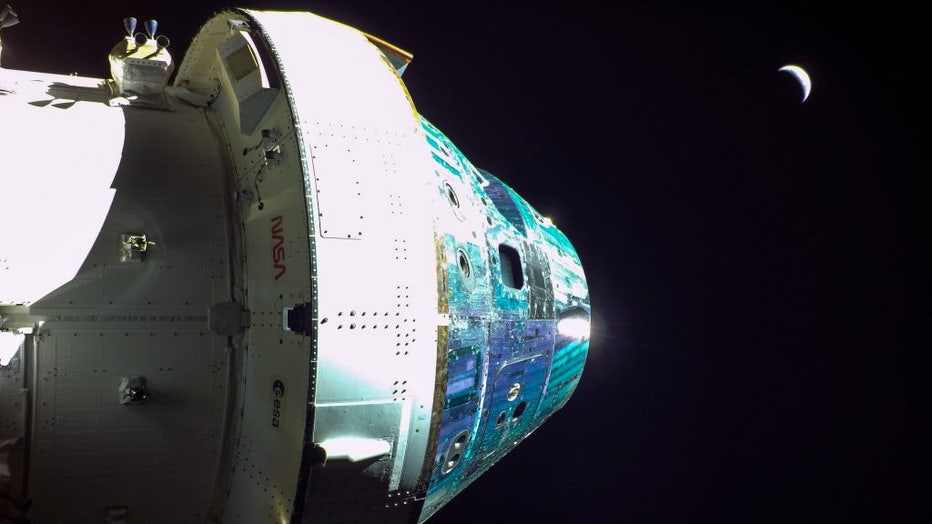 On the 19th day of the Artemis I mission, Orion captures Earth from a camera mounted on one of its solar arrays as the spacecraft prepares for the return powered flyby of the Moon on Dec. 5, when it will pass approximately 79 miles above the lunar su

As the spacecraft began flying away from the moon, its cameras captured the last close-up views of the moon.

Orion will splash down off the coast of San Diego, California, on Dec. 11 around 11 a.m., where U.S. Navy recovery teams will be waiting.

NASA will be looking for calm seas, minimal wind and a low chance of precipitation to safely recover the Orion capsule.

While no astronauts are onboard the Artemis 1 mission, the test flight of Orion and the Space Launch System will set up for Artemis II when NASA plans to fly two astronauts around the moon in Orion. This will be followed by Artemis III, the first human lunar landing in 50 years.

LINK: Get update on this story from FOXweather.com