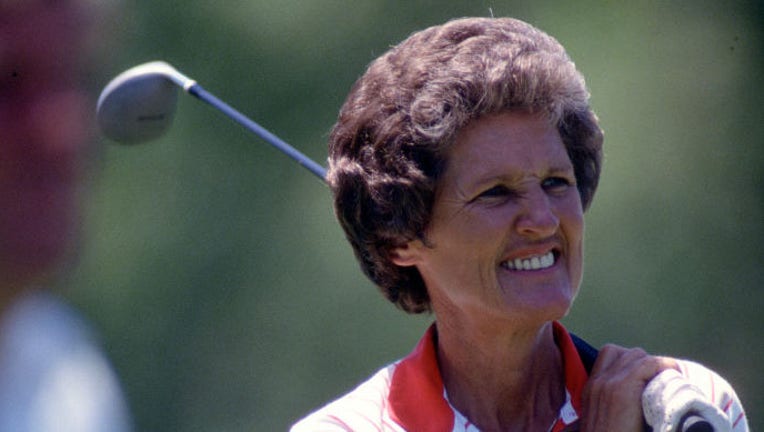 UNSPECIFIED - CIRCA 1990: Women's golfer Kathy Whitworth looks on during tournament play circa 1990. (Photo by Focus on Sport/Getty Images)

Kathy Whitworth set a benchmark in golf no one has ever touched, whether it was Sam Snead or Tiger Woods, Mickey Wright or Annika Sorenstam. Her 88 victories are the most by any player on a single professional tour.

Whitworth, whose LPGA Tour victories spanned nearly a quarter-century and who became the first woman to earn $1 million for her career on the LPGA, died on Christmas Eve, her longtime partner said. She was 83.

Bettye Odle did not disclose a cause of death, saying only that Whitworth died suddenly Saturday night while celebrating with family and friends.

"Kathy left this world the way she lived her life — loving, laugh and creating memories," Odle said in a statement released by the LPGA Tour.

Whitworth won the first of her 88 titles in the Kelly Girls Opens in July 1962. She won six majors during her career and broke Mickey Wright's record of 82 career wins when Whitworth captured the Lady Michelob in the summer of 1982.

Her final victory came in 1985 at the United Virginia Bank Classic.

All that was missing from her career was the U.S. Women's Open, the biggest of the women's majors. Upon being the first woman to surpass $1 million in career earnings in 1981, she said, "I would have swapped being the first to make a million for winning the Open, but it was a consolation which took some of the sting out of not winning."

Sorenstam referred to her on Twitter as the LPGA's all-time victory leader and a "total class act" who will be dearly missed.

"Thanks for setting the bar so high, Kathy," she wrote.

A look back at the biggest news stories of 2022

From Russia's invasion of Ukraine to the Supreme Court overturning the constitutional right to an abortion, these are the biggest headlines of 2022.

Whitworth was the AP Female Athlete of the Year in 1965 and in 1967, when she easily beat out Wimbledon singles champion Billie Jean King. Whitworth was inducted into the World Golf Hall of Fame in 1982.

She was the LPGA player of the year seven times in an eight-year span (1966 through 1973). She won the Vare Trophy for the lowest scoring average seven times and she was the leading money winner in eight seasons.

But she was identified by one number — 88.

Snead was credited with a record 82 wins on the PGA Tour, a total Woods has since matched. Wright won 82 times on the LPGA Tour, while Sorenstam had 72 wins when she retired after the 2006 season at age 36.

"I think Mickey had the best swing, and was probably the greatest golfer," Betsy Rawls once told Golf Digest. "But Kathy was the best player of the game that I have ever seen."

Whitworth was born in Monahans, a small West Texas town, and learned to play golf in New Mexico. She started at age 15 in Jal, New Mexico, on the nine-hole course built for the El Paso Natural Gas employees.

She soon was a two-time winner of the New Mexico State Amateur. After briefly attending Odessa (Texas) College, she turned pro at age 19 and joined the LPGA Tour in December 1958.

Phil Mickelson is considered one of the greatest golfers of all time.

"I was really fortunate in that I knew what I wanted to do," Whitworth once told Golf Digest. "Golf just grabbed me by the throat. I can’t tell you how much I loved it. I used to think everyone knew what they wanted to do when they were 15 years old."

Wright had the more aesthetically pleasing swing. Whitworth was all about grinding, and about winning.

Whitworth continued to conduct junior clinics and stay active in the game.

"I don't think about the legacy of 88 tournaments," she once said. "I did it because I wanted to win, not to set a record or a goal that no one else could surpass. I’m not some great oddity. I was just fortunate to be so successful. What I did in being a better player does not make me a better person.

"When I’m asked how I would like to be remembered, I feel that if people remember me at all, it will be good enough."