WASHINGTON - The Jan. 6 House investigatory committee urged the Justice Department on Monday to bring criminal charges against former President Donald Trump and his associates who helped him launch a multifaceted pressure campaign to try to overturn his 2020 election loss.

After 16 months, a thousand witnesses, and tens of thousands of documents, the panel said they have created the most comprehensive look at the worst attack on the Capitol in two centuries, calling their findings and recommendations a "roadmap to justice."

The committee's closing arguments wrapped up the lengthy inquiry and detailed findings about the insurrection, which the committee has called an "attempted coup" that warrants criminal prosecution from the Justice Department.

Here is a summary of what the committee reported: 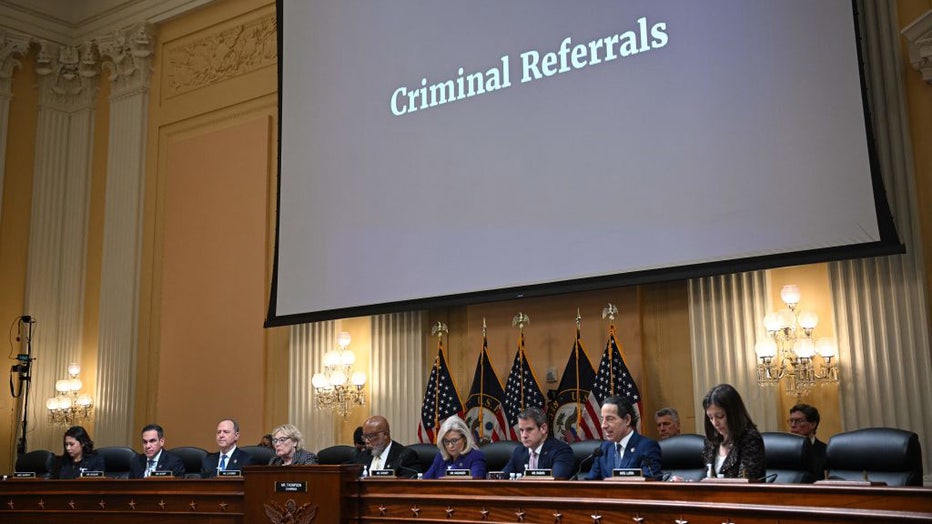 Members of the House Select Committee to Investigate the January 6 Attack on the US Capitol hold its last public hearing in the Canon House Office Building on Capitol Hill in Washington, DC on December 19, 2022. (Photo by Mandel Ngan/AFP via Getty Im

The committee alleged violations of four criminal statutes by Trump, in both the run-up to the riot and during the insurrection itself, as it recommended the former president for prosecution to the Justice Department.

The charges recommended by the committee are conspiracy to defraud the United States, obstruction of an official proceeding of Congress, conspiracy to make a false statement and insurrection.

The panel also asserts that Trump obstructed an official proceeding, the joint session of Congress in which the Electoral College votes are certified. The committee said Trump either attempted or succeeded at obstructing, influencing or impeding the ceremonial process on Jan. 6 and "did so corruptly" by pressuring Pence to try to overturn the results as he presided over the session. Pence declined to do so.

A criminal referral on the charge of insurrection is a clear effort to hold Trump directly accountable for the rioters who stormed the building. The rarely used insurrection statute criminalizes any effort to incite, engage in or assist a rebellion or insurrection "against the authority of the United States."

The committee also voted to refer conservative lawyer John Eastman, who devised dubious legal maneuvers aimed at keeping Trump in power, for prosecution on two of the same statutes as Trump: conspiracy to defraud the United States and obstructing an official proceeding.

The committee also made ethics referrals for five House Republicans — including House Republican leader Kevin McCarthy — who ignored congressional subpoenas from the panel.

The panel subpoenaed McCarthy, R-Calif., and Reps. Jim Jordan of Ohio, Scott Perry of Pennsylvania, Andy Biggs of Arizona and Mo Brooks of Alabama. The panel has investigated McCarthy’s conversations with Trump the day of the attack and meetings the four other lawmakers had with the White House beforehand as Trump and some of his allies worked to overturn his election defeat.

Is a criminal referral the same as being charged?

The short answer - no.

Think of it as a recommendation, of sorts, that the panel is giving the Justice Department to take over and explore further. Federal prosecutors will then decide whether to bring charges.

While a criminal referral is mostly symbolic, it's a decisive end to one of the most exhaustive congressional probes in memory.

Chairman Bennie Thompson, D-Miss., said the criminal justice system can provide accountability, adding, "We have every confidence that the work of this committee will help provide a roadmap to justice."

Thompson said Trump "broke the faith" that people have when they cast ballots in a democracy. "He lost the 2020 election and knew it," Thompson said. "But he chose to try to stay in office through a multi-part scheme to overturn the results and block the transfer of power."

Wyoming Rep. Liz Cheney, the panel’s Republican vice chairwoman, said in opening remarks that every president in American history has defended the orderly transfer of power, "except one."

The panel aired some new evidence at the meeting, including a recent interview with longtime Trump aide Hope Hicks. Describing a conversation she had with Trump around that time, she said he told her that no one would care about his legacy if he lost the election.

Hicks told the committee that Trump told her, "The only thing that matters is winning."

Lawmakers have promised that Monday's session will include a preview of their final report, which is expected to be released Wednesday. The panel will vote on adopting the official record, effectively authorizing the release of the report to the public.

The eight-chapter report will include hundreds of pages of findings about the attack and Trump’s efforts to subvert democracy, drawing on what the committee learned through its interviews with more than 1,000 witnesses.

In the report will also be the committee’s ideas for how to strengthen and expand the guardrails that protected the Electoral College certification in 2021.

Additional evidence, including some of the massive trove of video footage and testimony the committee collected, is expected to be released publicly before the end of the year.

The committee of seven Democrats and two Republicans is set to dissolve at the end of the year, and the investigation will be in the hands of the federal government.

Additional evidence, including some of the massive trove of video footage and testimony the committee collected, is expected to be released publicly before the end of the year.

Once Republicans take the majority next year, they are not expected to renew the committee, instead launching a slew of investigations that will focus on the Biden administration and the president's family.