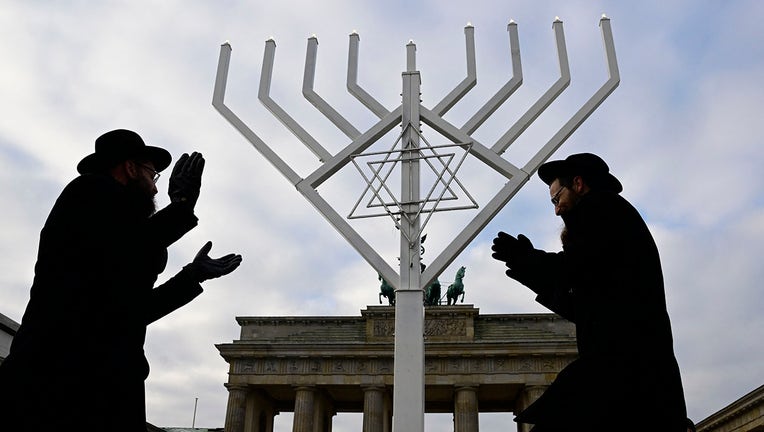 Rabbis Yehuda Teichtal (L) and Shmuel Segal sing and dance as they consecrate a giant menorah in front of the Brandenburg Gate in Berlin on December 16, 2022, as preparations are under way for Hanukkah (or Chanukkah), an eight-day Jewish celebration.

BERLIN - Holocaust survivors from around the globe are marking the third day of Hanukkah together with a virtual ceremony as Jews worldwide worry about a sharp increase in antisemitism in Europe, the U.S. and elsewhere.

Several dozen survivors will also gather in-person Tuesday for a menorah lighting at Jerusalem’s Western Wall — the holiest place where Jews can pray — to pay tribute to the 6 million European Jews killed by the Nazis in the Holocaust.

"As antisemitism rises around the world and hate again becomes the normalized language of the day, survivors remind us of the importance of hope," said Gideon Taylor, the president of the Conference on Jewish Material Claims Against Germany. The New York-based Claims Conference is organizing both of the events in observance of International Holocaust Survivors Night.

"During the Holocaust they did not give up. And after the war, they fought to carve out new lives for themselves and continue to speak and educate, all in the hope that their testimonies will win out over the hate," he added.

The virtual event, which starts Tuesday at 1830 GMT (1:30 p.m. EST) includes musical performances and messages from Holocaust survivors evacuated from the war in Ukraine as well as survivors from over a dozen other countries. Jewish celebrities such as singer Barbra Streisand and actor Jason Alexander from the "Seinfeld" TV series will also speak, along with Israeli President Isaac Herzog and German Chancellor Olaf Scholz.

"The Shoah was the darkest time of all," Scholz said, using the Hebrew word for the Holocaust. "Together with the survivors of the Shoah, we remember the untold suffering and the millions of victims of this betrayal of all civilized values for which Germans were responsible."

The strength of survivors to carry on and keep their memories alive is moving and impressive to many, said Scholz, adding that their example is needed today.

"We certainly need hope — particularly right now. Russia’s bombs and missile terror is endangering the lives and freedom of Ukrainians. Survivors of the Holocaust are also at risk, which is deeply shocking," Scholz said adding that "the fact that some of them have now found refuge in Germany is very humbling for us."

Alla Sinelnikova, a Holocaust survivor recently evacuated from Ukraine to Germany, said it's hope more than anything that kept and keeps her going through life's hardships.

"I have been living in the world for a very long time, and thanks to hope we only somehow survive," said 90-year-old Sinelnikova, who plans to participate in the Claims Conference's online event. "Because otherwise, you cannot live if there is no hope."

Since 2017, International Holocaust Survivors Night has been celebrated annually during Hanukkah, which is also known as the Jewish Festival of Lights.

While in the past, survivors would gather in person for celebrations in Israel, the U.S. and Germany, the event shifted online during the coronavirus pandemic, making it accessible for survivors spread across the globe. As they are getting older and more frail, many said they found it easier to attend the event online, so the Claims Conference decided to continue that option this year as well.

Some 250,000 survivors are still alive, living in Europe, Israel, the U.S. and elsewhere. Around 200,000 have received some kind of financial support this year from the Claims Conference.

In his message to fellow survivors, famed Nazi hunter Serge Klarsfeld called Hanukkah "a great reminder to think of the hope we all carry."

"We can all be a beacon of hope — a light in the darkness."