‘I thought we were going to die for sure’: Tornado survivor shares aftermath

In Keithville, Louisiana, an EF-2 tornado with winds estimated at 130 mph managed to decimate homes around Linda Barry as she huddled under a mattress, reciting the Lord’s Prayer for comfort. (Credit: Linda Barry via FOX Weather)

It took minutes, if not seconds, to destroy so much surrounding Linda Barry’s small neighborhood in northwest Louisiana.

An EF-2 tornado with winds estimated at 130 mph managed to decimate homes around her as she huddled under a mattress protected by her soon-to-be husband, reciting the Lord’s Prayer for comfort.

Yet her chant was muted by the sound of something she described as a freight train, shattering windows and crashing trees in its path across Pecan Farms in Caddo Parish.

"There's no reason that me and my fiance are still here except for God," she said. "It was like God laid over top of us."

Minutes before the tornado hit at 4:49 p.m. Tuesday, Barry was staring out her kitchen window and could see a funnel cloud of debris traveling through the woods headed straight for her home.

"The fear we felt when we saw and heard it coming right at us in our yard, we ran as fast as we could (to the bedroom)," Barry said.

By the time she finished praying for the nightmare to end, life around Barry and her fiance stood still. 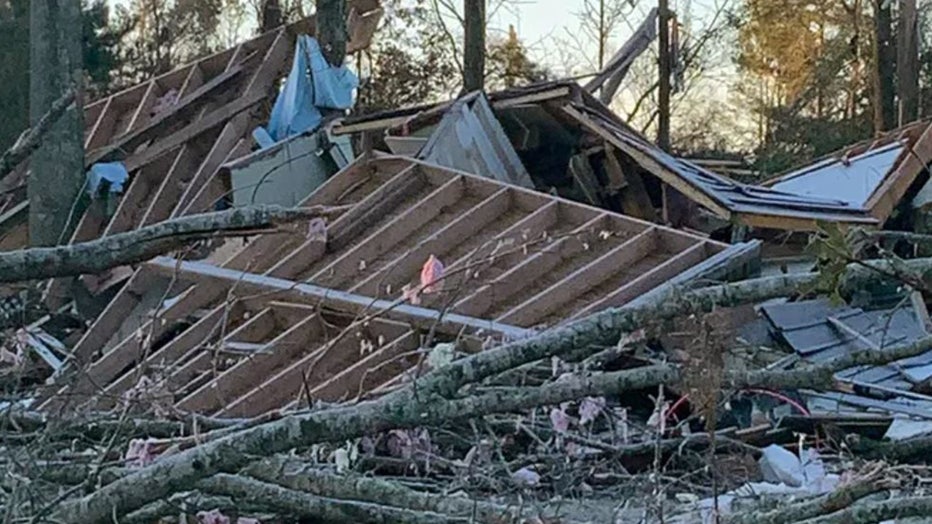 Caddo Parish Homeland Security and Emergency Preparedness Division Commander Robert Jump said most of the damage from the tornado spanned a mile-long path through the Pecan Farms subdivision in Keithville on Tuesday night.

As the couple emerged from the debris scattered across their bedroom, Barry said there was a sigh of relief to hear sirens. To her, it was like God saying everything was going to be OK, she said.

She then began to hear neighbors pleading for help, becoming louder by the minute.

"They were screaming so loud. It was the screams," Barry said. She paused, then cried. "I think it was worse when they stopped screaming."

Words could not explain what she saw with her eyes or felt with her heart, Barry said, when they emerged from the debris scattered across their bedroom.

As they opened their front door, they were greeted by trees intertwined with power lines stacked as high as their home.

"It was pretty horrific," she said.

While Barry and her fiance survived the terror, her neighbors were not so fortunate.

Search for the missing

The Caddo Parish Coroner’s Office confirms 30-year-old Yoshiko A. Smith and her 8-year-old son, Nikolus Little, died from blunt force trauma they suffered during the tornado.

Law enforcement officials told FOX Weather that the woman’s husband, who is also the boy's father, had gone for groceries before the storm. When he returned home, his house was gone.

3 KILLED IN LOUISIANA AS SEVERE STORMS TEAR ACROSS SOUTH

First responders worked endlessly through the night looking for the mother and child whose home was found on top of a two-story cabin across the street from Barry’s house.

A team of more than 100 first responders and volunteers spread out through the woods and debris of more than a dozen homes leveled by the tornado. Nikolus’ body was found in a wooded area behind Barry’s home just before 11 p.m., the coroner’s office said. His mother's body was found under storm debris at 3:30 a.m. Wednesday.

"A lot of people lost their homes," Barry said. "We're not upset about the loss of anything materialistic. I think we as a community are grieving the loss of our neighbor, her son and her family."

Barry now finds herself sitting in her damaged home not in despair but grateful for her life and the lives of her neighbors spared from the nightmare.

"We saw the tornado, and it was huge and loud," she said. "It could have very easily killed everybody in our little neighborhood. Even though there's great tragedy here, it has really humbled us and brought us together as a community."

Barry said her small community has come together over the past two days to help one another. She's asked for prayers while thanking those working to help them recover.