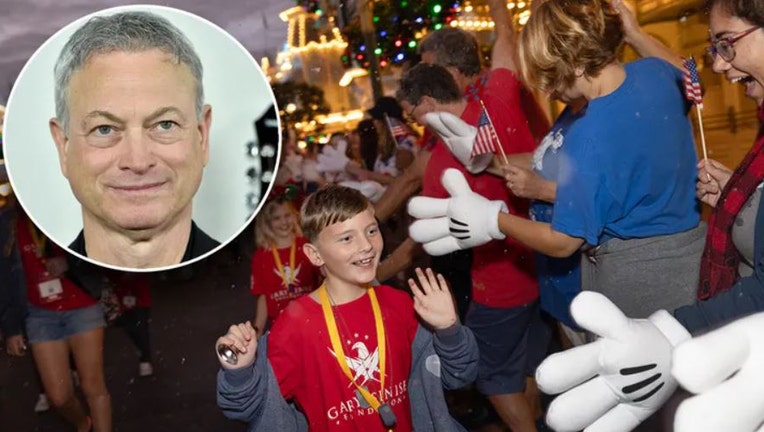 Gary Sinise was happy to be back among the people with whom he's formed incredible bonds through the years for the first in-person Snowball Express in more than three years, an event that had taken on a virtual format due to the pandemic.

In the beginning of December, years of online meetings were finally in the past as nearly 2,000 family members of fallen military heroes gathered for a five-day experience at Walt Disney World on behalf of the Gary Sinise Foundation.

"This year we had a lot of new families, young children who had never experienced Snowball before," Sinise exclusively told Fox News Digital.

The Gary Sinise Foundation’s Snowball Express program supports thousands of families of fallen military members year-round with empowerment workshops and regional community events. At the end of each year, the foundation celebrates Snowball Express members with an all-expenses paid five-day experience in which family members spend time together, honor fallen loved ones and cultivate relationships in a safe, warm and welcoming environment.

GARY SINISE SHARES WHY HE'S ‘BEYOND GRATEFUL’ FOR AMERICA'S VETERANS: HEROES WHO INSPIRE A ‘BRIGHTER FUTURE’

Throughout the week, families got the chance to reconnect with each other, bond, share in joy or heartache, and simply feel a little bit of love.

Chef Robert Irvine, a former British Royal Navy chef with a long history of service to the military, donated his time to the kids during a fun evening of music and dancing at the Magic Kingdom.

The "Forrest Gump" star described one of the many meaningful events during the week, the Walk of Gratitude. 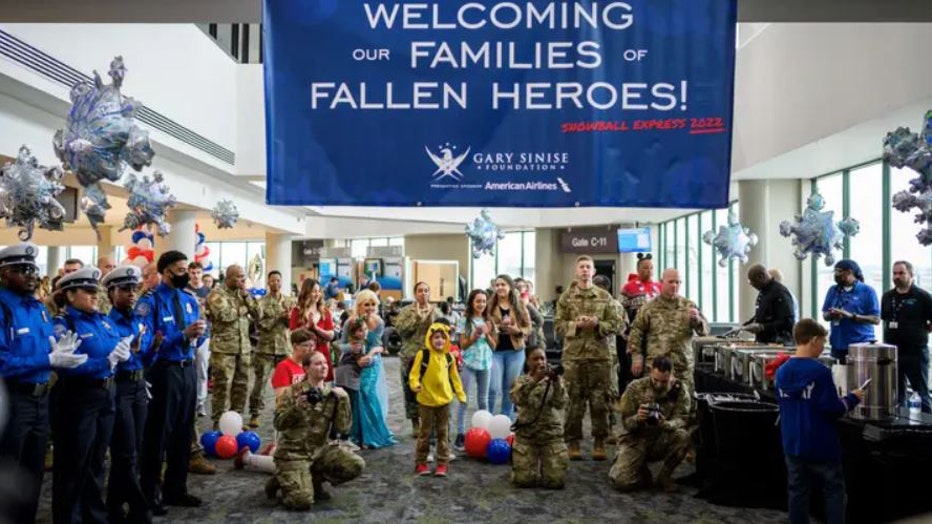 Families of fallen military members are welcomed to Snowball Express at the airport. (Gary Sinise Foundation)

At sunrise one morning, Snowball Express families gathered at the entrance to raise the flag together and were greeted by more than 1,000 Disney VoluntEARS. The group then walked along Main Street, USA toward Cinderella's castle where the children wrote messages to their lost loved ones on special scrolls. 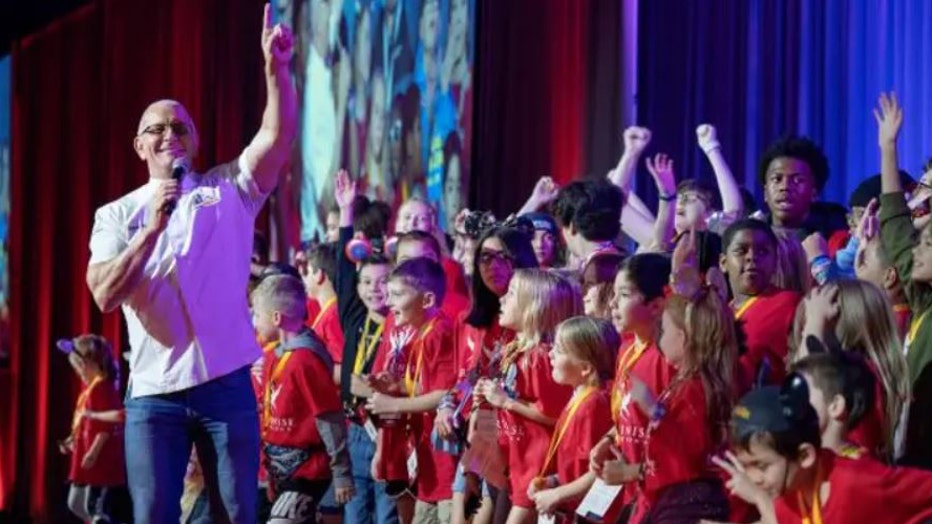 Mickey Mouse helped the kids put the messages in a big cauldron, which were then sent up into the sky.

"It's beautiful. These kids live all over the country, so they could be the only family in that town who has lost somebody, but when they come to Snowball, they're with everybody," Sinise said.

"They've got a lot of love and a lot of support. This is something. We've got so many that have sacrificed their lives for our country, and they leave behind these families. And we don't want to forget them – ever." 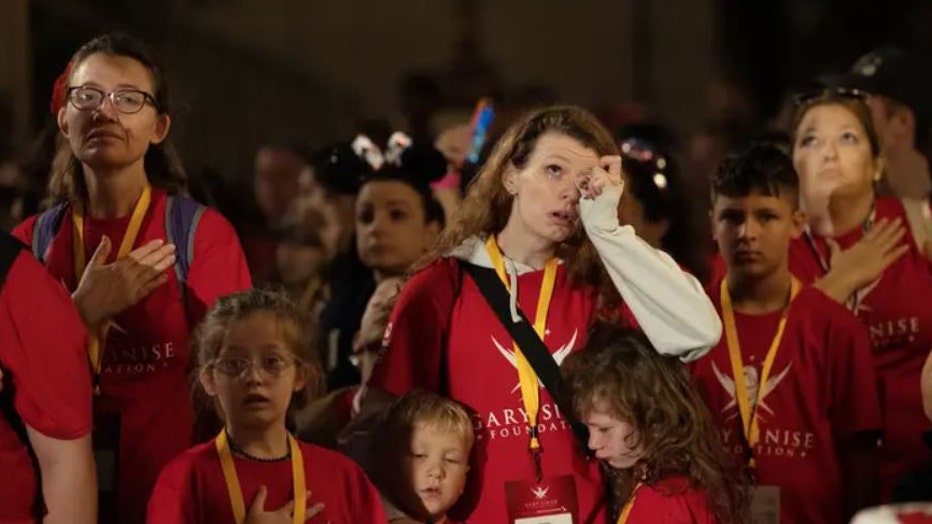 Sinise said the holidays can be a difficult time for the children and families.

"That's why we do it [Snowball Express] in December. It's a tough time for the kids … the holidays and missing their fallen hero. We want to bring them together and put our arms around them." 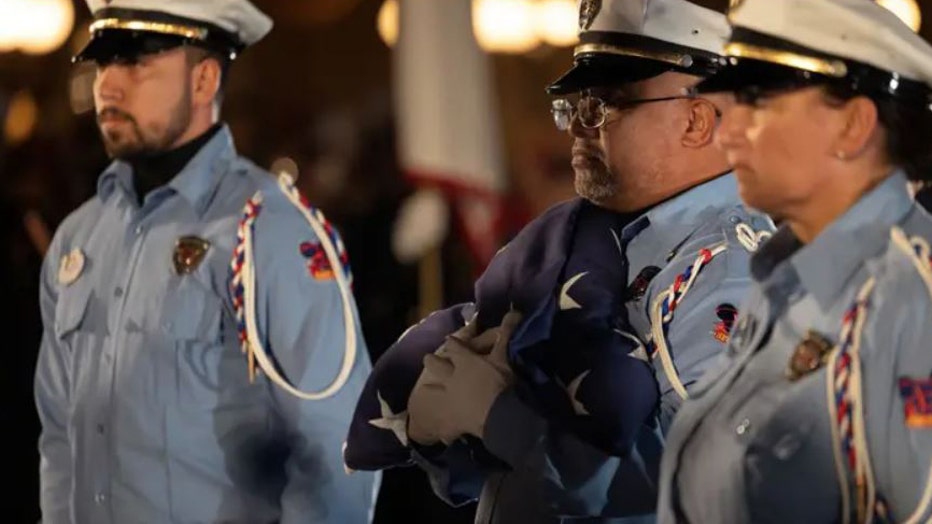 Gary Sinise said one particularly moving event was the Walk of Gratitude in which families gathered for a flag service in the morning. (Gary Sinise Foundation)

"We have an amazing group of volunteers and corporate sponsors that have gotten involved to celebrate the kids and to bring them together at the most magical place on Earth," he said. "We provide all kinds of entertainment. We provide services, we provide counseling, we provide lots of fun. It's really a magnificent event and really … it's one of our signature events at the end of the year. Because it's so large, it requires so many things." 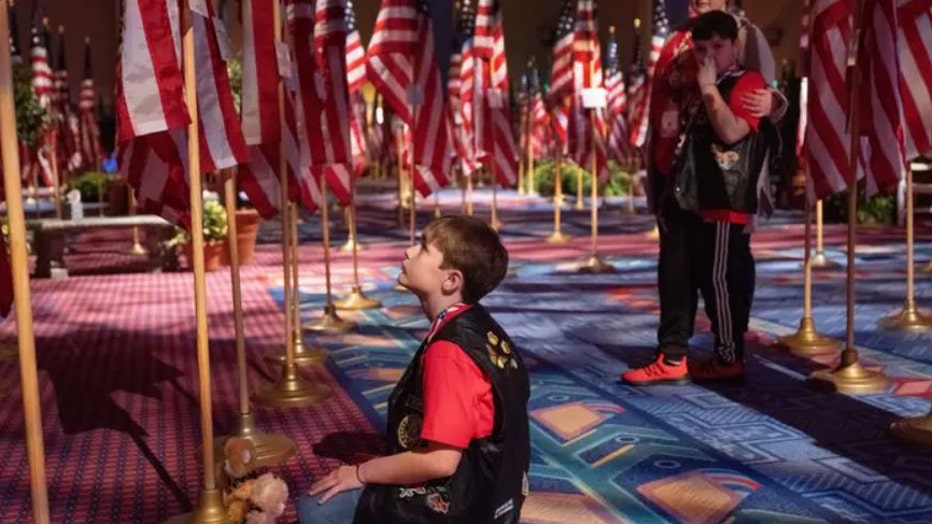 Children honor their lost loved ones during the five-day event. (Gary Sinise Foundation)

He praised American Airlines for continuing their support as the foundation's travel sponsor and providing tickets to accommodate each family.

"We had over a thousand hotel rooms this year," he boasted. "We take over about half of the Coronado Springs hotel down there." 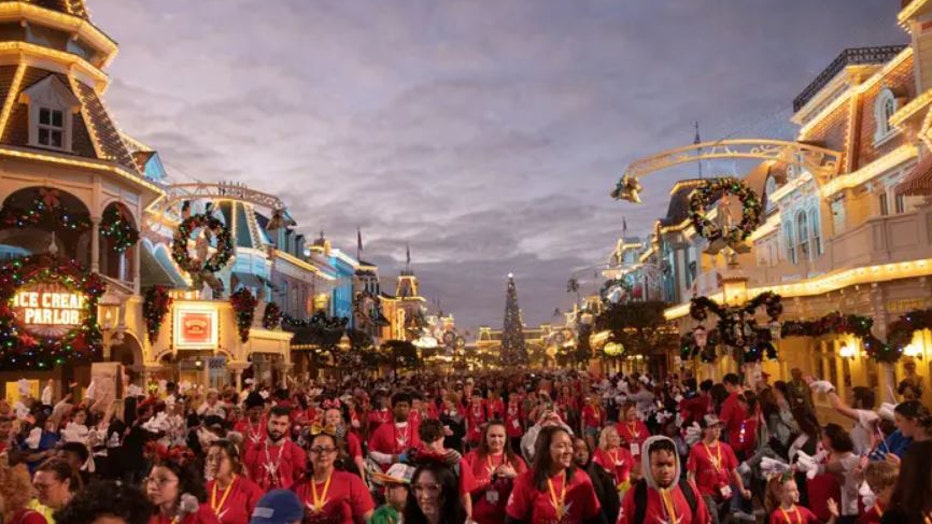 Sinise and his foundation, which he founded in 2011, have helped thousands of children since becoming an official Snowball initiative in 2017.