The final hearing from the January 6th Committee will be Monday. Peter Loge, an associate professor at The George Washington University, spoke with LiveNOW from FOX's Josh Breslow about the highlights of the hearings.

WASHINGTON - An Iowa construction worker and QAnon follower was sentenced Friday to five years in prison for his role in the Jan. 6, 2021, insurrection at the U.S. Capitol, when he led a crowd chasing a police officer who diverted rioters away from lawmakers.

Wearing a T-shirt celebrating the conspiracy theory with his arms spread, Douglas Jensen became part of one of the most memorable images from the riot.

As he handed down the sentence, Judge Timothy Kelly said he wasn't sure Jensen understood the seriousness of a violent attack in which he played a "big role."

"It snapped our previously unbroken tradition of peaceful transfer of power. We can't get that back," Kelly said. "I wish I could say I had evidence you understood this cannot be repeated."

Jensen was convicted at trial of seven counts, including felony charges that he obstructed Congress from certifying the Electoral College vote and that he assaulted or interfered with police officers during the siege. His sentence also includes three years of supervised release and a $2,000 fine.

He gave a brief statement to the judge, saying that he wanted to return to "being a family man and my normal life before I got involved with politics." 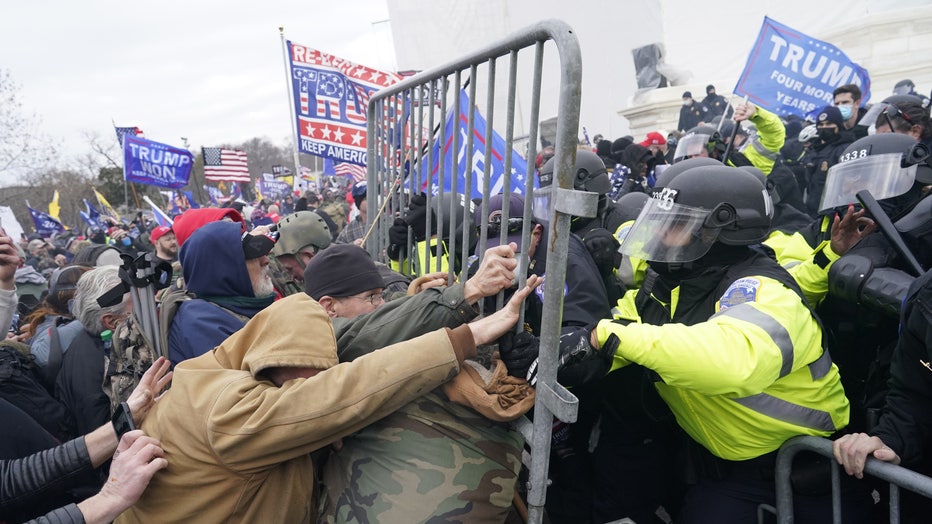 Protesters gather on the second day of pro-Trump events fueled by President Donald Trump's continued claims of election fraud in an to overturn the results before Congress finalizes them in a joint session of the 117th Congress on Wednesday, Jan. 6,

Jensen scaled a retaining wall and entered through a broken window so he could be one of the first people to storm the Capitol that day, Kelly said. He led a group that chased Capitol Police Officer Eugene Goodman up a staircase. He would later re-entered the building and scuffle with police.

"Doug Jensen wanted to be the poster boy of the insurrection," prosecutor Emily Allen said.

Jensen wore a T-shirt with a large "Q" on it because he wanted the conspiracy theory to get credit for what happened that day, his defense attorney Christopher Davis said.

Davis said Jensen's own "childhood of horrors" influenced his later faith in the baseless belief that former President Donald Trump was secretly fighting against enemies in the "deep state" and a child sex trafficking ring run by satanic pedophiles and cannibals.

It also includes the apocalyptic prophesy that "The Storm" was coming and would usher in mass arrests and executions of Trump’s foes, including then-Vice President Mike Pence, who Trump would deride that day as lacking courage.

Davis has argued Jensen was dressed as a "walking advertisement for QAnon" and not intending to attack the Capitol. He did not physically hurt people or damage anything inside the Capitol, Davis said, and many friends and family members wrote letters to the judge on his behalf.

Pence was presiding over the Senate on Jan. 6 as a joint session of Congress was convened to certify President Joe Biden’s 2020 electoral victory. Before the riot, Trump and his allies spread the falsehood that Pence somehow could have overturned the election results.

Approximately 900 people have been charged with federal crimes for their conduct on Jan. 6. More than 400 of them have pleaded guilty, mostly to misdemeanor offenses. Sentences for the rioters have ranged from probation for low-level misdemeanor offenses to 10 years in prison for a man who used a metal flagpole to assault an officer.