A plywood box that has been covering a statue of Christopher Columbus in South Philadelphia for more than two years has been removed.

PHILADELPHIA - A plywood box that covered a statue of Christopher Columbus in South Philadelphia for more than two years has been removed, following a ruling in commonwealth court.

The ruling came down late last week and the box was removed late Sunday night.

The court ruling also reversed a previous order and will allow for a clear structure to be built around the statue.

A plywood box that has been covering a statue of Christopher Columbus in South Philadelphia for more than two years can now be removed, according to a ruling in commonwealth court.

In June 2020, the statue became the point of contention between groups who wanted to defend it from vandalism amid ongoing social unrest, and other groups who saw the statue as a symbol of hate. The confrontations between the opposing sides resulted in violence and arrests.

The 146-year-old statue in South Philadelphia’s Marconi Plaza was covered by the box back that same month. 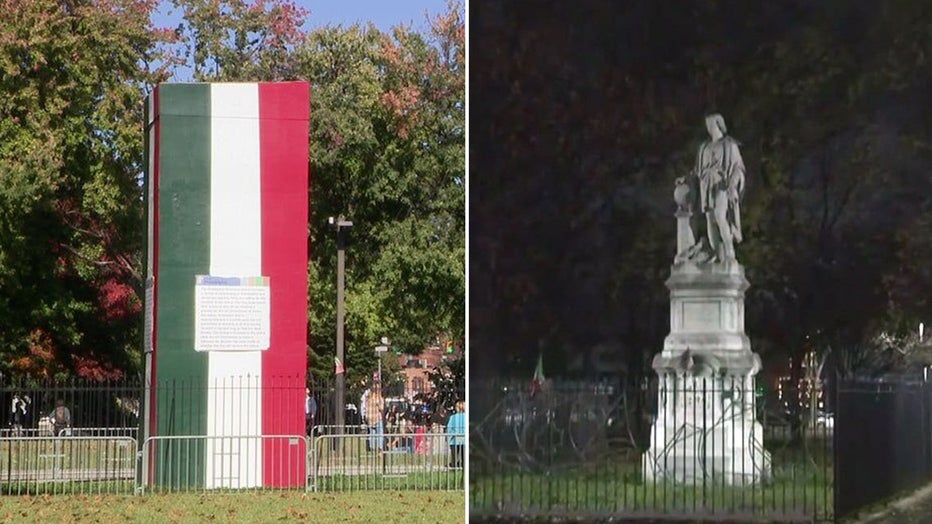 Philadelphia Mayor Jim Kenney had ordered the statue’s removal, calling it a matter of public safety. Kenney said Columbus was venerated for centuries as an explorer but had a "much more infamous" history, enslaving Indigenous people and imposing punishments such as severing limbs or even death.

Last year, a judge reversed the city’s decision to remove the statue, saying city officials had failed to provide public evidence that the statue’s removal was necessary to protect the public.

"It is baffling to this court as to how the City of Philadelphia wants to remove the Statue without any legal basis. The City’s entire argument and case is devoid of any legal foundation," Judge Paula Patrick wrote.

The Mayor’s Office released a statement following the commonwealth court ruling Friday stating their position on the statue’s removal has not changed and that they are working to comply with the court’s orders.

"We are very disappointed in the Court’s ruling. We continue to believe that the Christopher Columbus statue, which has been a source of controversy in Philadelphia, should be removed from its current position at Marconi Plaza. We are continuing to review the Court’s latest ruling and are working to comply with the Court’s orders, including unboxing. While we will respect this decision, we will also continue to explore our options for a way forward that allows Philadelphians to celebrate their heritage and culture while respecting the histories and circumstances of everyone’s different backgrounds," the statement read.

Back In October, the city painted the box with the colors of the Italian flag ahead of Columbus Day. The paint job came at the request of Councilmember Mark Squilla, who represents the district.

The statue was originally erected in Fairmount Park in 1876. It was moved to Marconi Plaza and refurbished in 1982.