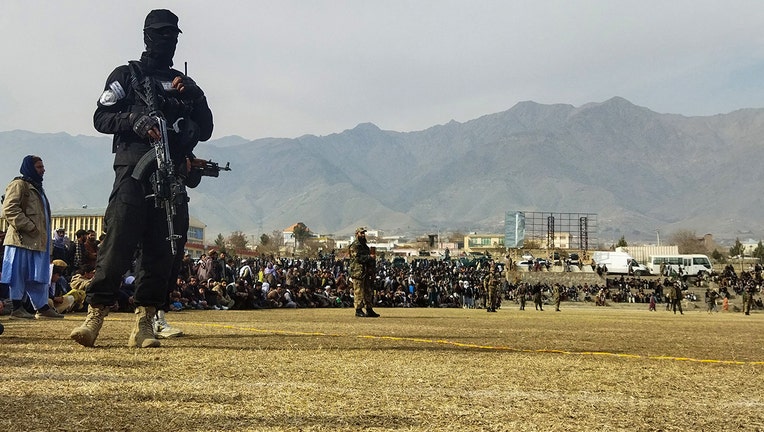 A Taliban security personnel stands guard as people attend to watch publicly flogging of women and men at a football stadium in Charikar city of Parwan province on December 8, 2022. (Photo by -/AFP via Getty Images)

ISLAMABAD - Twenty-seven people were lashed in public on Thursday in Taliban-ruled Afghanistan as punishment for alleged adultery, theft, drug offenses and other crimes, according to a court official.

Afghanistan’s new authorities have implemented hard-line policies since they took over the country in August 2021 that have underlined their interpretation of Islamic law, or Sharia.

The country's Supreme Court issued the final rulings after appeals. In a statement, the court said the lashings took place in the northern province of Parwan, with 18 men and nine women punished in all.

Abdul Rahim Rashid, an official with the court, said the men and women were each lashed between 25 to 39 times. An unspecified number of those punished also received two-year prison terms in Charakar, the provincial capital, he added.

The lashings were carried out before a "public gathering of locals and officials," Rashid added.

Provincial officials and local residents attended the public punishments, during which officials spoke about the importance of Sharia law, added the court statement.

Thursday's lashings come a day after the Taliban authorities executed an Afghan convicted of killing another man, the first public execution since the former insurgents returned to power last year.

The execution, carried out with an assault rifle by the victim’s father, took place in western Farah province before hundreds of spectators and many top Taliban officials, according to Zabihullah Mujahid, the top government spokesman. Some officials came from the capital Kabul.

The execution was met with international criticism. U.N. Secretary-General Antonio Guterres said "the death penalty cannot be reconciled with full respect for the right to life," spokeswoman Stephanie Tremblay said.

No foreign state has officially recognized the Taliban government that took over as U.S. and NATO troops withdrew last year. The Taliban formerly ruled Afghanistan before the U.S. invasion of 2001.

"Unfortunately, a number of countries and institutions still do not have a proper knowledge and understanding of Afghanistan," he said.

Mujahid pointed out that capital punishment was practiced in many other countries including the United States.

A separate court statement said that earlier this week, three men convicted of theft were lashed in public in the eastern province of Paktika.

During the previous Taliban rule of Afghanistan in the late 1990s, the group carried out public executions, floggings and stonings.

After they overran Afghanistan in 2021, the Taliban initially promised to allow for women’s and minority rights. Instead, they have restricted rights and freedoms, including imposing a ban on girl’s education beyond the sixth grade.

The former insurgents have struggled in their transition from warfare to governing amid an economic downturn and the international community’s withdrawal of aid.