Golfers were sent scrambling for safety as massive waves overtook an ocean-front golf course during one of a series of atmospheric rivers to slam into California in recent weeks.

The group was completing the 14th hole at the Monterey Peninsula Country Club in Pebble Beach when a video recorded by Peter Butler shows the group was sent running for higher ground.

Butler began filming the unruly ocean crashing onto the normally serene golf course to document the wild weather. He can be heard describing the "45-foot waves" and soon realizing they needed to move fast.

"It's going to hit us, dude," someone in the video says, and then the video begins shaking as Butler runs away from the incoming waves. "Go, go, run!"

"Oh no," another person said. "Look at the carts." 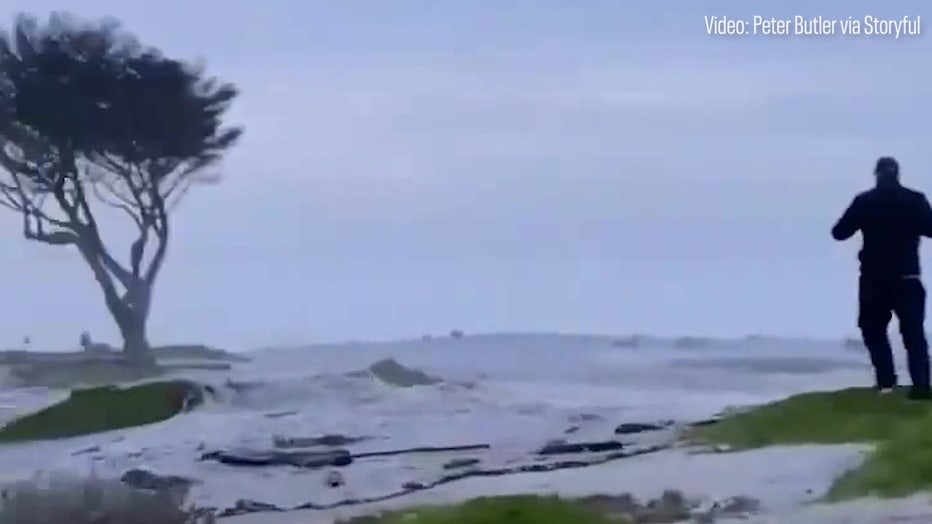 A quick shot of the golf course showed several golf carts halfway submerged in the stormy waves and golf gear being pulled back out to sea.

No one was hurt, but the group decided to call it a day on their round of golf.

The parade of atmospheric rivers continues

The game became high stakes due to a series of atmospheric rivers continuing to pound California over the past several weeks.

The video was filmed on Jan. 5 amid yet another round of rain and flooding, prompting emergency situations up and down the California coast. A Flood Warning was underway for the Bay Shoreline from Big Sur to Cloverdale.

Ellen DeGeneres, Oprah Winfrey, Prince Harry, Meghan Markle and the entire community of Montecito was forced under mandatory evacuation orders by Santa Barbara County officials due to mudslides from a torrential storm.

This week, California continues to deal with an onslaught of atmospheric river storms that has brought torrential rain and life-threatening flooding, mudslides and debris flows to many parts of the state.

LINK: GET MORE ON THIS STORY FROM FOXWEATHER.COM