The Supreme Court said Thursday it has not determined who leaked a draft of the court's opinion overturning abortion rights, but that the investigation continues.

The Supreme Court is set to hear a case that could make it more difficult for students with disabilities to resolve problems quickly when they’re not getting needed assistance in public schools.

The Supreme Court is temporarily blocking an order that would lift pandemic-era restrictions on asylum seekers.

The order by Chief Justice John Roberts comes as conservative states are pushing to keep limits on asylum seekers that were put in place during the beginning of the coronavirus pandemic.

The Supreme Court on Monday heard the case of a Christian graphic artist who objects to designing wedding websites for gay couples.

The Supreme Court is about to confront a new elections case that could dramatically alter voting in 2024 and beyond.

The Supreme Court ordered the handover of former President Trump’s tax returns to the House Ways and Means Committee. Last month, Chief Justice John Roberts granted a stay, temporarily blocking the former president from having to turn over his tax records to Democrats on the committee. Trump and his legal team had filed asking the Supreme Court to block the release of his tax records.

The Supreme Court on Wednesday heard arguments in a clash over artwork by Andy Warhol that was based on a previous photograph of the musician Prince, a copyright case with potentially major implications for artists and creators. The justices asked probing questions over whether Warhol infringed on a photographer’s copyright when he used her Prince portrait as the basis for a silkscreened rendering that graced the pages of Vanity Fair — or if Warhol’s artistic work should be considered transformative, and thus legal. Justice Elena Kagan asked an attorney for the Andy Warhol Foundation if his late client’s status as an iconic figure in the pop art movement risked skewing the legal test for determining if a work of art is “transformative.”

The Supreme Court ruled Thursday in a 5-4 decision that the Biden administration can repeal the Trump administration’s Migrant Protection Protocols, commonly known as the "Remain in Mexico" policy, reversing a lower court ruling. 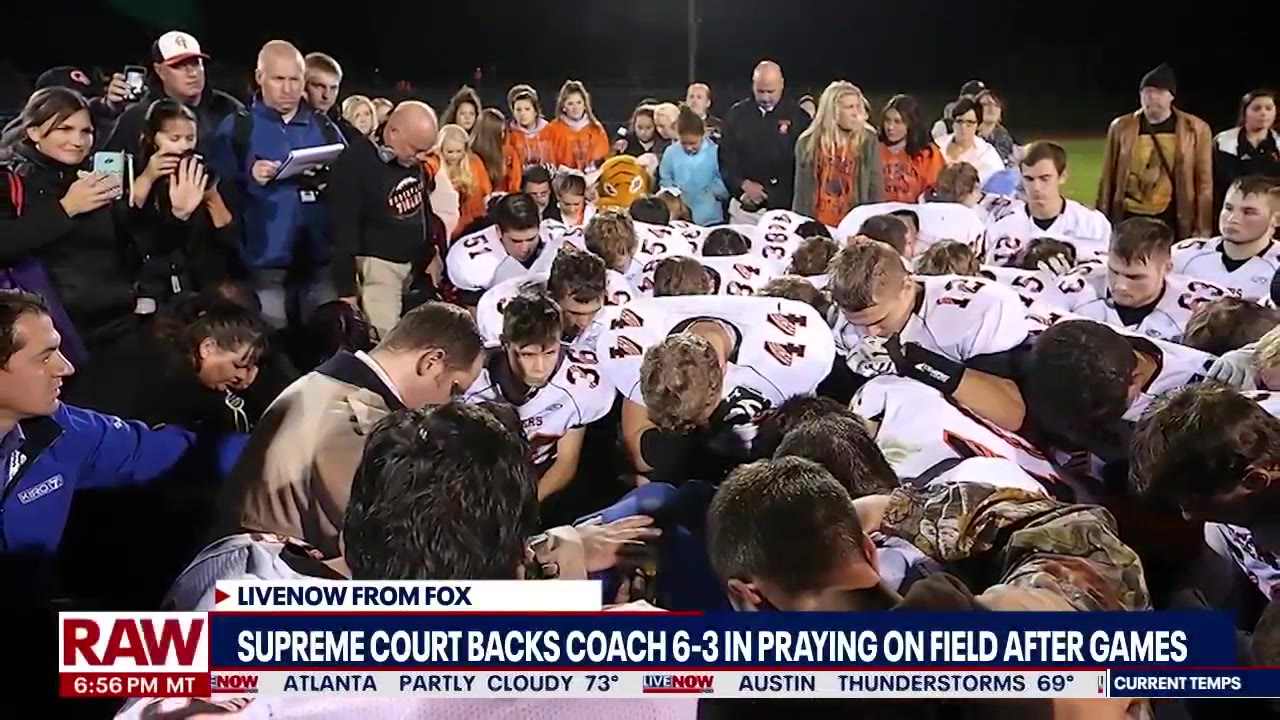 The Supreme Court ruled that a high school football coach who knelt and prayed on the field after games was protected by the Constitution, a decision that opponents said would open the door to “much more coercive prayer" in public schools. LiveNOW from FOX speaks with coach Joe Kennedy.

BREAKING NEWS: The Supreme Court of the United State on Friday overruled Roe v. Wade. Sen. McConnell and other lawmakers are reacting to the ruling. Subscribe to LiveNOW from FOX! https://www.youtube.com/livenowfox?sub_confirmation=1 Where to watch LiveNOW from FOX: https://www.livenowfox.com/ Follow us @LiveNOWFOX on Twitter: https://twitter.com/livenowfox Raw and unfiltered. Watch a non-stop stream of breaking news, live events and stories across the nation. Limited commentary. No opinion. Experience LiveNOW from FOX.

An armed man was arrested near the Maryland home of Supreme Court Justice Brett Kavanaugh Wednesday morning, law enforcement sources confirmed to Fox News. The suspect was carrying a gun and a knife when arrested and had made violent threats against Kavanaugh, sources said. The man’s name is being withheld at this time, but sources say he is in his 20s and was picked up on a nearby street. He did not get to the Kavanaugh home.

The demonstrators were protesting on May 11, 2022, in response to a leaked Supreme Court draft ruling published by Politico suggesting the landmark Roe v Wade decision would be overturned. Credit: Taylor Dabney/The Daily Signal via Storyful

All eyes are on the Supreme Court Tuesday following a leaked report suggesting they could be poised to overturn the 1973 landmark Roe v. Wade case that legalized abortion nationwide.

The unprecedented leak of a draft Supreme Court opinion on abortion has left many outraged, but so far the identity of the rogue clerk or justice remains entirely unknown. An anonymous individual leaked a bombshell draft opinion to Politico on Monday, showing a ruling that would overturn Roe v. Wade. The leak included the entire text of the opinion as drafted in February of this year, which suggests the leak came from high up in a justice's office.

The U.S. Supreme Court plans to strike down Roe versus Wade, overturning abortion rights, according to a draft majority opinion obtained by Politico. The outlet reports no draft decision in the court's modern history has ever been publicly disclosed while the case was still pending.