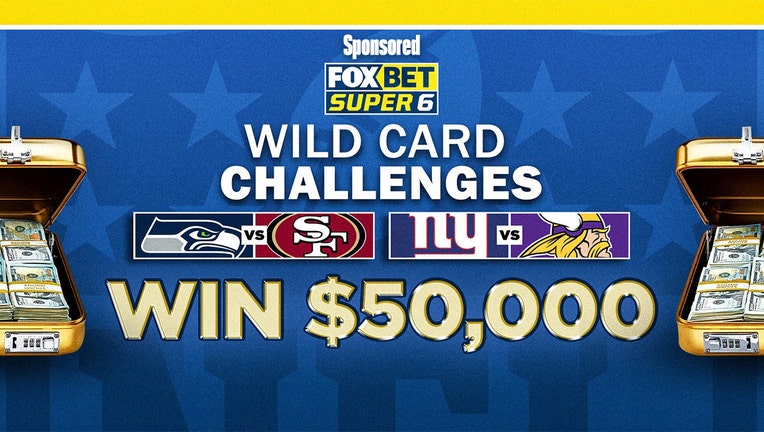 Folks, Super Wild Card Weekend is upon us! And let's be honest, NFL playoff football is when the real fun begins.

Think about it. For 18 regular season weeks, we witnessed teams like the Eagles absolutely dominate the gridiron, we watched underdogs like the Lions upset unsuspecting opponents, and we looked on as the reigning world champion Rams fell from grace. Indeed, it has been a spectacular ride. But only in the postseason is every single game a win-or-go-home scenario. Which is what makes the playoffs that much more exhilarating.

The stakes are higher than the jumbotron at Jerry's World. And because there's so much on the line, Terry Bradshaw and FOX Bet Super 6 are giving you opportunities to cash in on these thrilling playoff games.

The two FOX Bet Super 6 playoff challenges are free-to-play contests in the FOX Bet Super 6 app where players pick six different outcomes in the marquee matchups between the Seahawks and 49ers and the Giants and Vikings. From the teams with the most tackles to the winners and the margins of victory, predict all the outcomes perfectly, and you could be on your way to two big payouts of $50,000 each.

All you have to do is download the FOX Bet Super 6 app on your phone or mobile device, make your picks and submit your selections for Seahawks-Niners before that game kicks off Saturday, and then do the same for Giants-Vikings before that battle kicks off this Sunday.

It's easy and fun. Most importantly, it's FREE. And people really do win!

If you need help before heading over to the app, we have you covered. Check out these predictions for the big games below!

Which team will have the highest kick return average and what will that average be?

Which team will have the most tackles and how many will they have?

San Francisco will dominate the tackle game. This season, the Niners have had the league's best defense, so watch that unit do work wrapping up opponents during Super Wild Card Weekend.

Which team will have the longest punt and how long will it be?

We have to remind you that punters need love, too. When it comes to the punter that will win in this spot, the props go to Seattle's Michael Dickson.

Mike's longest punt this season was a 68-yarder, which was shorter than San Fran punter Mitch Wishnowsky's longest of 74. But Dickson averages 48.5 yards per punt, while Mitch averages 43.9.

Which team will have the most rushing yards and how many will they have?

Count on Christian McCaffrey of the 49ers to help San Francisco have the most rushing yards in this matchup. As one of the league's best backs in 2022, CMC has racked up 1,139 yards on the ground this season. However, it's worth noting that McCaffrey was limited in practice earlier this week. But if he's a go this weekend, the Niners will roll in this category.

Which team will have the longest field goal and how long will it be?

We're going back to Seattle on this one. The Seahawks' Jason Myers has a season-long 56-yard field goal. On the other side is San Francisco's Robbie Gould. His longest this year went for 51 yards.

Which team will win and by how many points?

The fairy tale for Geno Smith ends this weekend. Meanwhile, Brock Purdy's Cinderella story will get at least one more chapter when the Niners get the win.

At FOX Bet, San Francisco is currently favored by 9.5 points over Seattle. Because the 49ers are such a complete team on both sides of the ball, they're the team that lives to see another week. However, coach Pete Carroll, Geno and DK won't go down without a fight.

Prediction: Niners by 5 to 6 points

Which team will have the highest kick return average and what will that average be?

Which team will have the most tackles and how many will they have?

Both Minnesota and New York have two of the weakest defenses in the league, but the Giants fare slightly better than the Vikes. Because the G-Men have the better defense and because Kirk Cousins and crew will have their offense on the field longer, look for New York to have more tackles.

Which team will have the longest punt and how long will it be?

Let's give Vikings rookie Ryan Wright his due. The punter out of Tulane has a 73-yard punt under his belt this season, and he averages 47.4 yards per punt. Giants punter Jamie Gillan averages 46.8 yards per punt with a season-long 69.

Which team will have more passing yards and how many will they have?

Which team will have the longest field goal and how long will it be?

Greg Joseph, the Vikings kicker, has notched a 61-yarder this year. The Giants' Graham Gano's longest kick this season was for 57.

Back Minnesota in the field goal game.

Which team will win and by how many points?

You'd think that the Vikings, the home team with the 13-4 straight-up record, would be better than 3-point favorites over the 9-7-1 Giants. But alas! Bookmakers still aren't showing the Vikes much love.

That's okay. We got your back, Kirk Cousins.

Not only will the Vikes cover the spread, but look for Minnesota to rain on New York's parade, sending the Giants packing as they get the decisive victory this Sunday.

Now, it's your turn.

Open up your FOX Bet Super 6 app and make your picks for both of these exciting games. Submit your selections for the contests before each kicks off! And remember to share your picks with us by tagging @FOXSuper6 and @EricaReneeD and using the #EricaSuper6 across all social media platforms.

Download the FOX Bet Super 6 app for your chance to win thousands of dollars on the biggest sporting events each and every week! Just make your picks and you could win the grand prize. Download and play today!

No purchase necessary. Open to legal residents of the US, excluding WA. 18 and older. See terms and conditions at foxsuper6.com. Sponsored by TSG Interactive US Services Limited.