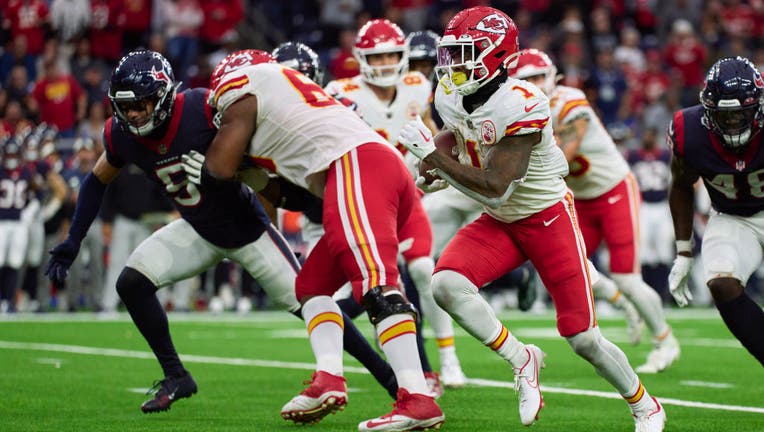 HOUSTON, TX - DECEMBER 18: Jerick McKinnon #1 of the Kansas City Chiefs rushes for the game winning touchdown against the Houston Texans during overtime at NRG Stadium on December 18, 2022 in Houston, Texas. (Photo by Cooper Neill/Getty Images)

Kansas City Chiefs running back Jerick McKinnon delivered the walk-off touchdown in overtime to defeat the Houston Texans, 30-24, and wrap up the AFC West title.

McKinnon got the handoff and broke through the Chiefs offensive line to scamper for the 26-yard score. He threw the ball into the back of the end zone and removed his helmet to celebrate the touchdown while his teammates mobbed him. It was his second touchdown of the afternoon.

The veteran running back ran for 52 yards on 10 carries and had eight catches for 70 yards with a touchdown catch in the second quarter from Patrick Mahomes. It was part of a 13-point second quarter as the Chiefs trailed at halftime due to a missed extra point.

Mahomes and the Chiefs were up 24-21 with 11:57 left in the game, but Ka’imi Fairbairn would tie the game at 24 with 5:11 to go in the game. Harrison Butker had a chance to win the game for the Chiefs but missed what would’ve been the go-ahead field goal from 51 yards away.

Thankfully for the Chiefs, it was McKinnon who sent fans home happy.

Houston held tough against Kansas City — as they did against the Dallas Cowboys last week — but failed to put the Chiefs away.

Davis Mills was 12 for 24 with 121 passing yards and two touchdown passes. Jordan Akins and Teagan Quitoriano each had a touchdown catch. Chris Moore led the team with four catches for 42 yards.