Searches for the 31 sailors still unaccounted for from HTMS Sukhothai continued on Dec. 19, 2022, after the vessel sank in the Gulf of Thailand, the Royal Thai Navy said. Credit: Royal Thai Navy via Storyful

BANGKOK - Thai navy ships and helicopters searched Monday for more than 30 sailors still missing 24 hours after their warship sank in rough seas in the Gulf of Thailand. Survivors described chaotic scenes as they struggled to survive while the ship went down, and the navy commander confirmed there were not enough life jackets for everyone on board.

As of Monday night, 75 sailors from the HTMS Sukhothai corvette had been rescued and 31 were still missing, the navy said. The high waves that caused the accident had lessened since Sunday night's sinking, but were still high enough to endanger small boats, the navy said.

Details about the sinking and the initial rescue effort were still unclear. One sailor told Thai Rath television that there were not enough life jackets because more people than usual were aboard the ship. 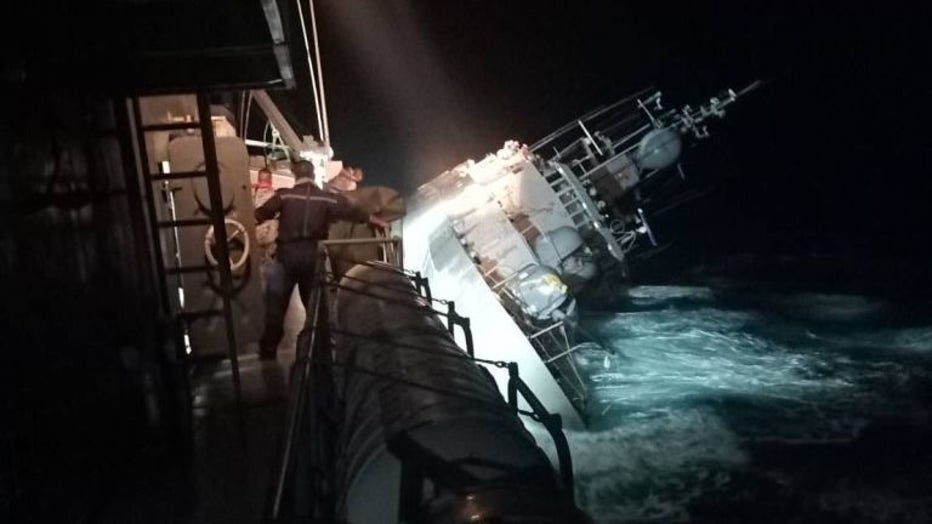 In this photo provided by the Royal Thai Navy, the HTMS Sukhothai corvette warship is pictured on December 18, 2022, in the Gulf of Thailand. (Photo by Royal Thai Navy/Handout/Anadolu Agency via Getty Images)

In comments broadcast by another station, PPTV, Navy Commander Adm. Choengchai Chomchoengpaet confirmed that was true.

"This operation, they added staff from the Marine Corps and Air and Coastal Defense Command, about 30 people. This is why I think there were not enough life jackets," he said.

The ship normally carried a total of 87 crew and officers, according to the navy's website.

Another survivor interviewed by Thai Rath said waves swept people away as the boat was listing.

He said a big wave "took me, threw me under the ship. The ship went vertical and pulled me down. I struggled to get up and held on to someone who had a life jacket."

The sailors interviewed by Thai TV stations were not identified by name but spoke at a makeshift rescue center on shore.

A rescued crew member interviewed by Thai PBS television said he had to float in the sea for three hours before he was rescued. He said the ship was buffeted by waves 3 meters (10 feet) high as it was sinking Sunday night, complicating rescue efforts.

Eleven of the rescued sailors were being treated in a hospital. The navy denied a local media report that one death had been confirmed, saying the fatality was from an accident involving another boat.

Strong winds blew seawater onto the HTMS Sukhothai and knocked out its electrical system Sunday evening, making control of the ship difficult. The navy dispatched three frigates and two helicopters with mobile pumping machines to try to assist the disabled ship by removing the seawater, but couldn't do so because of the strong winds.

The loss of power allowed more seawater to flow into the vessel, causing it to list and sink.

Thailand's Meteorological Department had issued a weather advisory for the general area just a few hours before the accident, saying that waves in the Gulf of Thailand were expected to be 2-4 meters (7-14 feet) high with thundershowers. It suggested that all ships "proceed with caution" and warned small craft not to go to sea until Tuesday.

The Sukhothai was built in Tacoma, Washington, and commissioned in 1987. With a maximum displacement of 959 tons and a length of 76.8 meters (252 feet), it is about midsize for a corvette, a type of armed vessel that typically is used for patrolling close offshore waters.

The warship had been on patrol 32 kilometers (20 miles) from the pier at Bangsaphan district in Prachuap Khiri Khan province. Pokkrong said the ship had been on a regular patrol to assist any fishing boats needing help.

"Our top priority now is to rescue all the sailors. We will plan to have the ship salvaged later," he said. The search was being conducted in a 16-square kilometer (6.2-square mile) area around the site of the sinking.

While northern and central Thailand are seeing their coldest temperatures of the year, far southern Thailand has been experiencing storms and flooding in recent days.