An officer for the Tampa Police Department is out of a job after officials said he dragged a female suspect from his patrol vehicle to the entrance of Orient Road Jail. The agency released body camera and surveillance footage of the incident. The officer was fired.

TAMPA, Fla. - An officer with the Tampa Police Department was fired after he was seen on body camera and surveillance video dragging a woman during a jail booking, officials said.

Gregory Damon, who has been with the department as a patrol officer since August 2016, was fired Tuesday for the incident that happened back in November, according to TPD. The department said they conducted an internal investigation and determined he violated multiple policies while booking the inmate into the Orient Road Jail. 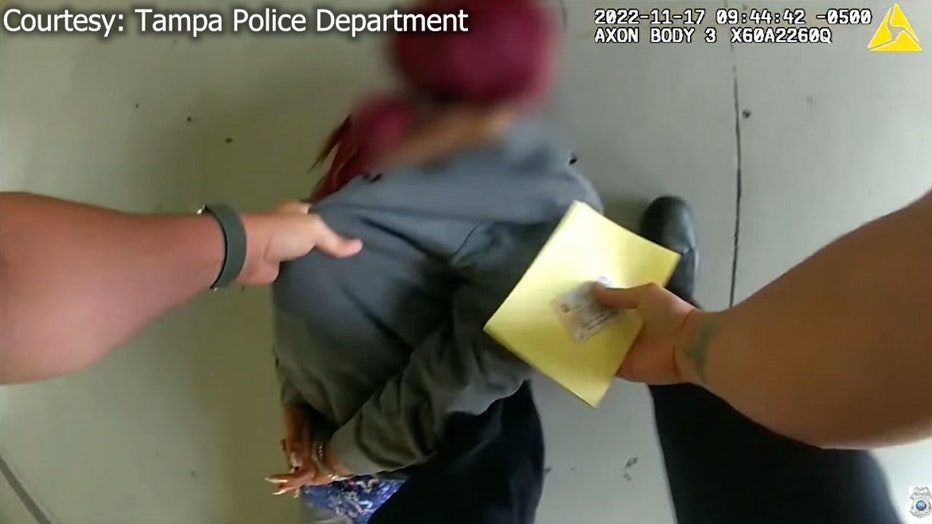 "Professionalism is not only expected, it is demanded, in every encounter our officers have with the public, regardless of the arrestee being uncooperative or unpleasant in return," said Interim Tampa Police Chief Lee Bercaw. "As law enforcement officers, we are held to a higher standard."

Damon was one of the officers called to the Tampa Family Health Center on 22nd Street on November 17 about someone sleeping outside the property and refusing to leave, TPD said. The woman was previously warned for trespassing on the same property a month prior to the incident, so she was arrested and taken to jail by Damon.

When they arrive at the jail, the woman refused to get out of the patrol car and walk into central booking, according to the police department. On the body camera video released by TPD, she can be heard yelling at the officer "I want you to drag me." 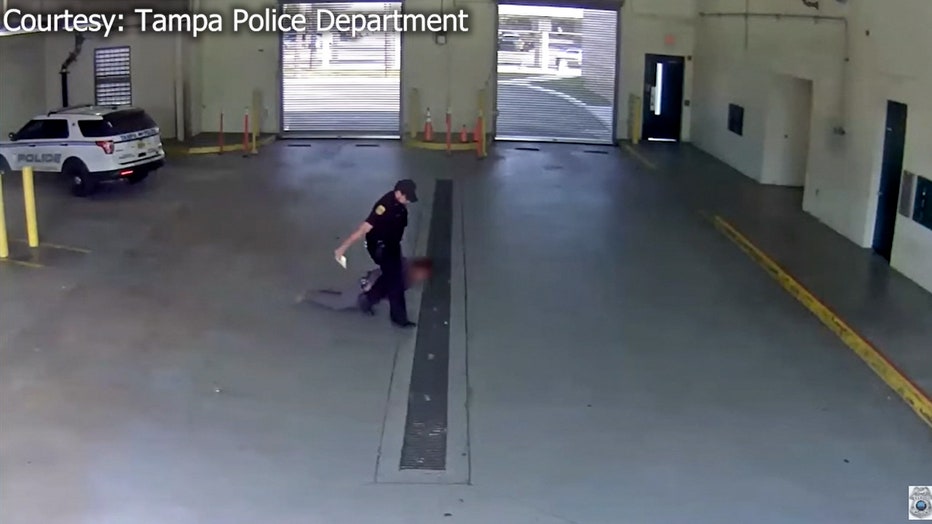 That's when the video shows Damon taking her by the arm and dragged her from the vehicle to the entrance of the jail where he buzzed the door, prompting deputies to come to help lift the woman from the ground. Throughout the incident, the woman used vulgar and obscene language, the department said.

"Rather than remaining professional, Damon himself made rude and derogatory comments to the arrestee," TPD said in a press release on the incident.

Tampa police said the woman was uninjured during the incident.

Officials with TPD explained they revised its policy on handling uncooperative prisoners after a similar incident in 2013 with an uncooperative person in custody. They said the new policy added specific language against dragging and said it was "never an appropriate practice."

According to the department, the correct procedure would have been to request assistance from the booking staff, lift the person from the vehicle and secure them in a restraining chair to be rolled into intake.

The department was made aware of the incident by supervisors at the Hillsborough County Sheriff's Office, which operates the county detention facilities. Damon was relieved of his duties once TPD opened up an investigation into the incident on November 18, according to officials.

After reviewing the video from the incident and interviewing Damon, they made the decision to fire the officer, officials said.

"This former officer's actions were unacceptable and are not tolerated at this department, which is why we acted swiftly in initiating an internal investigation, relieving him of his duties, and ultimately terminating his employment," Bercaw said.

During the incident, TPD said they found Damon violated policies related to searching, transporting, and booking prisoners; courtesy to the public; reporting response to resistance; treatment of persons in custody; and more.