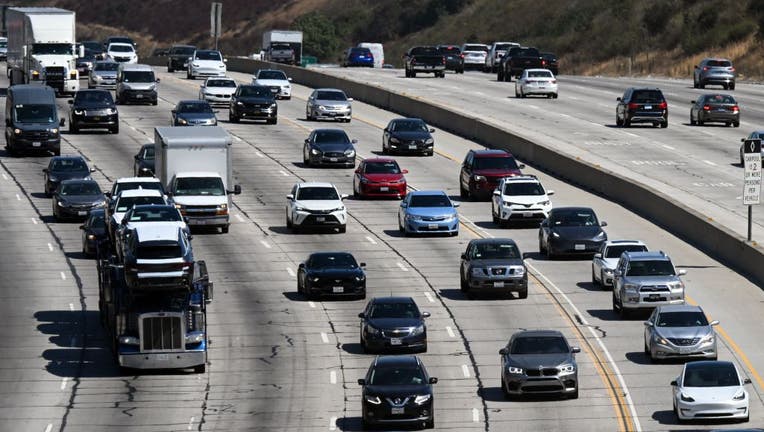 A truck pulls a car carrier trailer as cars, SUVs, and other vehicles drive in traffic on the 405 freeway through the Sepulveda Pass in Los Angeles, California, on August 25, 2022. - California ruled Thursday that all new cars sold in America's most

DETROIT (AP) - A large study by U.S. highway safety regulators found that more than half the people injured or killed in traffic crashes had one or more drugs, or alcohol, in their bloodstreams.

Also, just over 54% of injured drivers had drugs or alcohol in their systems, with tetrahydrocannabinol (THC), an active ingredient in marijuana, the most prevalent, followed by alcohol, the study published Tuesday by the National Highway Traffic Safety Administration found.

Although the study authors say the results can’t be used to gauge drug use on the roads nationwide, they say the high number of drivers, passengers and other road users with drugs in their systems is concerning.

Acting NHTSA Administrator Ann Carlson said the study found that nearly 20% of the drivers tested had blood-alcohol levels of 0.08% or higher, exceeding the legal limit in every state.

"We also are concerned that nearly 20% of road users tested positive for two or more drugs, including alcohol," she said. "The use of multiple substances at once can magnify the impairing effects of each drug."

The study of blood tests taken at seven level-one trauma centers and four medical examiners' offices across the country comes at a critical time on U.S. roadways. Traffic deaths have risen dramatically since the start of the pandemic to what officials describe as crisis levels. And more states are legalizing recreational use of marijuana with research just starting about the impact on traffic safety.

"It's scary to all of us in a way," said Michael Brooks, executive director of the nonprofit Center for Auto Safety, a watchdog group. "But frankly, I don't think I'm that surprised."

Brooks, who is based in Washington, D.C., said he often sees people drive after drinking or smoking cannabis.

"There's not a commute that goes by that I don't smell marijuana on the road, from someone actively smoking in a car in front of me," he said.

The study took place between September of 2019 and July of 2021 at trauma centers in Miami and Jacksonville, Florida; Charlotte, North Carolina; Baltimore; Worcester, Massachusetts; Iowa City, Iowa; and Sacramento, California. Medical examiners at four of the sites also took part.

Alcohol guidance from the CDC

Alcohol can have very dangerous long-term effects on a person's health if abused.

The study, which took blood-test data from 7,279 road users, also found that more than half of injured pedestrians and just over 43% of injured bicyclists had a drug in their bloodstreams.

The study was set up to measure prevalence of drug and alcohol use, but the numbers can't be used to show drug use on the roads nationwide because the hospitals were not picked to represent the entire country, said Amy Berning, a NHTSA research psychologist and one of the study authors.

The study also can't be used to show a correlation between increasing numbers of highway deaths and drug use, although she said detecting such a high percentage of use with a large sample size is "a concern for NHTSA."

Researchers counted any level of drugs in blood samples and did not measure whether people were impaired, Berning said. It likely will use the data as a baseline for further study of the issue, she said. NHTSA is planning a national roadside survey to measure alcohol and drug use on the roads. It last did such a survey in 2013 and 2014.

The presence of THC in so many patients could be because it can stay in a bloodstream longer than alcohol or other drugs, Berning noted.

The study was released as NHTSA began its annual holiday season campaign against impaired driving.

"Making a plan for a safe, sober ride home is critical to saving lives this holiday season," Carlson said.