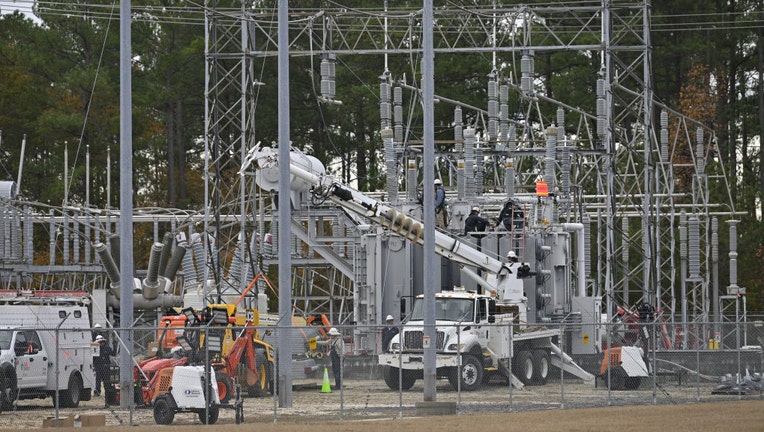 A view of the substation while work is in progress as thousands are without power on Moore County after an attack at two substations in North Carolina. December 05, 2022. (Peter Zay/Anadolu Agency via Getty Images)

RALEIGH, N.C. - Power should be restored by Thursday morning to thousands of homes in a central North Carolina county that have been without electricity for several days after an attack on the electric grid, Gov. Roy Cooper said Tuesday.

"I hope it's earlier. I mean, people are really hurting," Cooper told reporters in Raleigh.

Duke Energy said crews were making progress on restoring power to Moore County, where authorities said one or more people shot up two substations, but the repairs won’t be complete until later in the week. Officials have said the damage requires sophisticated repairs and delivery of equipment from outside of the area.

Nearly 36,000 customers were without power in the county Tuesday, down from a peak of about 45,000, according to poweroutage.us.

The governor called for a thorough assessment of the state's critical infrastructure Tuesday morning at a Council of State meeting — a collective body of elected officials comprising the executive branch. He said this will likely include discussions with federal regulators, lawmakers and utility companies about how to bolster security and prevent future attacks.

In the short-term, the state has sent generators to Moore County and is helping feed residents. Law enforcement in surrounding counties has been more vigilant about monitoring nearby substations since the attack, he said.

"This seemed to be too easy," Cooper said after the meeting. "People knew what they were doing to disable the substation, and for that much damage to be caused — causing so much problem, economic loss, safety challenges to so many people for so long — I think we have to look at what we might need to do to harden that infrastructure."

Echoing the governor's remarks, Duke Energy said in a message to customers posted on its website that it is on track to restore power throughout the county by Thursday morning, in line with previous estimates.

"Our technicians continue to work in 24-hour shifts and remain on schedule to bring service back on by early Thursday," the statement said.

Authorities have said the outages began shortly after 7 p.m. Saturday night after one or more people breached the gates of the two substations and opened fire. Police have not released a motive or said what kind of firearm was used.

Many businesses around the county that's about 60 miles (95 kilometers) southwest of the state capital of Raleigh are closed at a normally busy time of year for tourism and holiday shopping. Schools are also closed and traffic lights are out around the area.