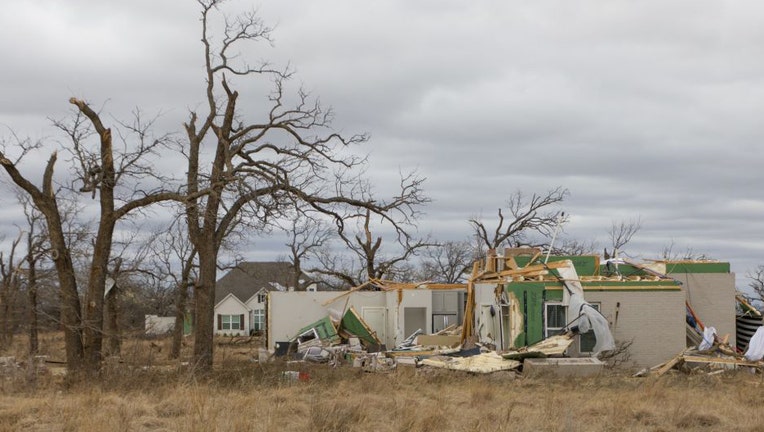 FILE-Photo taken on March 22, 2022 shows a house damaged by a tornado in Jacksboro, northern Texas, the United States. (Dan Tian/Xinhua via Getty Images)

The word to describe the 2022 month of November's severe portfolio would be "bookends."

The month started quite busy with a significant late-season tornado outbreak spanning from Texas to Arkansas. This outbreak was responsible for two EF-4 tornadoes -- the first to reach that rating since April.

Following that outbreak to open the month, severe weather essentially took a nap that lasted about three weeks. The month ended with another significant late-season tornado outbreak spanning the South from Texas to Alabama. 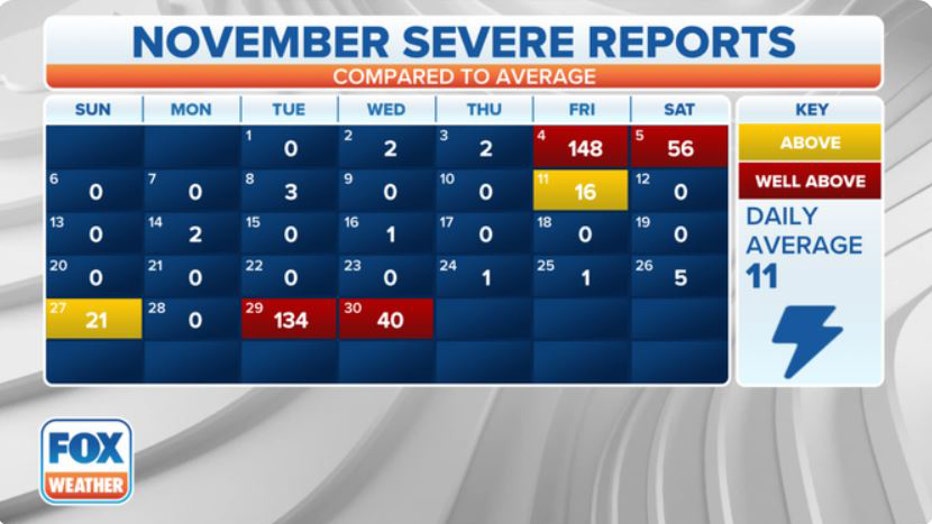 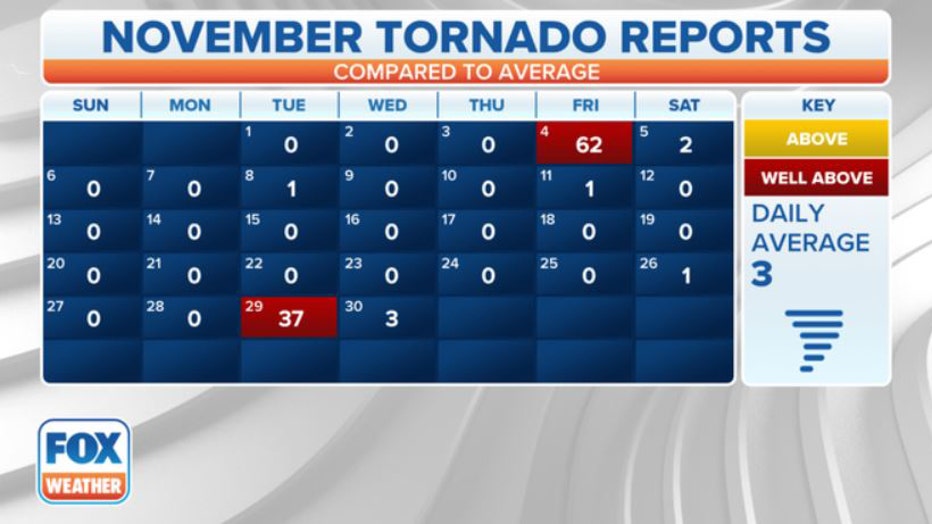 The 107 reports of tornadoes this November ranks as the busiest in a single month since June and is just about twice the long-term average of just over 50 for the month.

Reports were made in 10 states, with the lion's share (30) going to Texas. The top three for the month are Mississippi with 22 and Arkansas with 19. 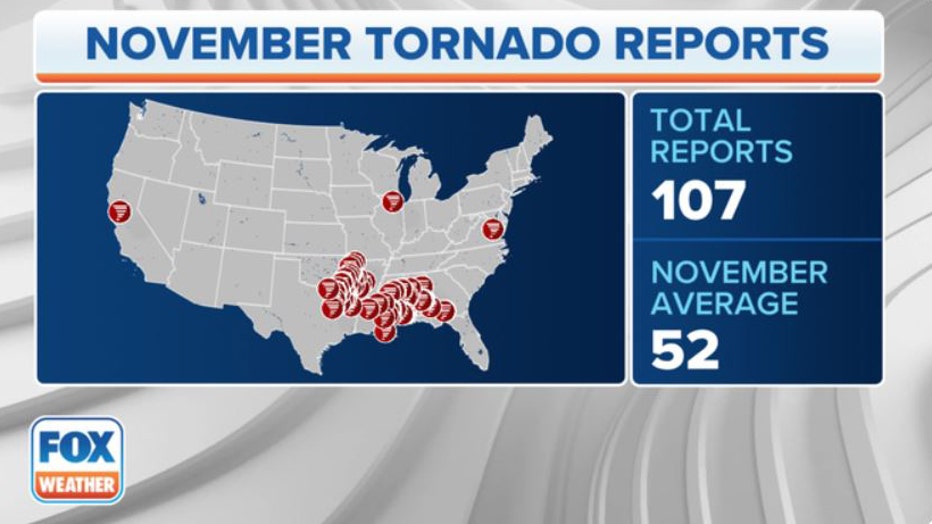 November will be remembered for two separate outbreaks. The first occurred on Nov. 4-5 when 31 tornadoes were confirmed by the National Weather Service survey teams across parts of Texas, Oklahoma, Louisiana, and Arkansas. The strongest tornadoes for the month occurred during this outbreak – a pair of EF-4 tornadoes – and were the strongest in the U.S. since April's EF-4 in Georgia.

The strongest of these EF-4 tornadoes, which struck near Caviness, TX, was estimated to have winds of 170 mph. Over the next 23 days, there were just three reports of tornadoes, making it the quietest, most tornado-free period of the year since January and February.

The month's second outbreak began on the 29th and was responsible for 40 reports of tornadoes over two days. So far, 11 tornadoes have been confirmed and rated by the National Weather Service, including a pair of EF-3 tornadoes – one in Louisiana on Nov. 29 and the other crossing from Mississippi into Alabama the next morning. 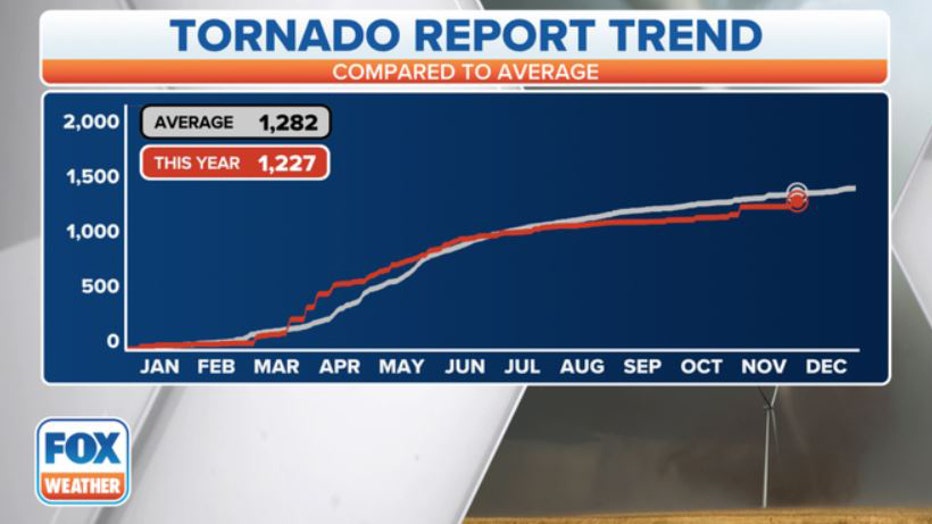 During the year, we have seen 1,227 reports of tornadoes, which is just below the long-term average of 1,282. 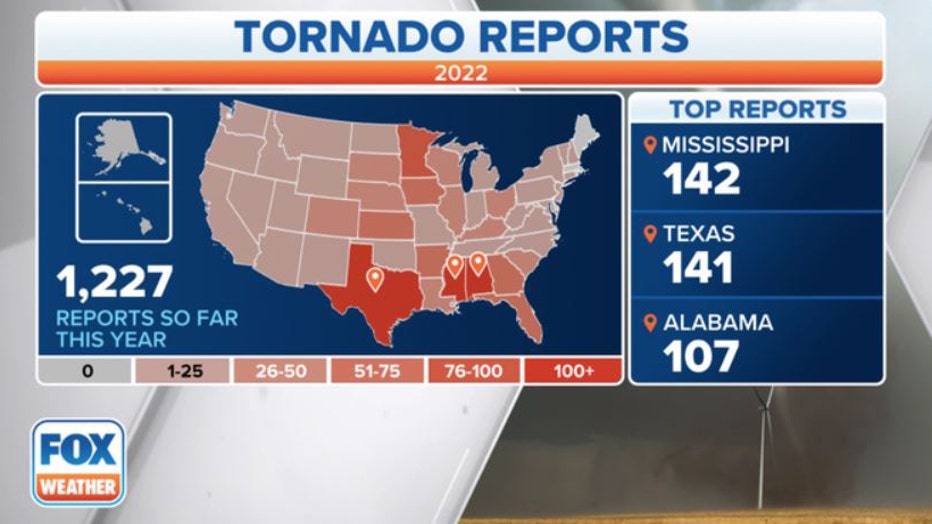 Mississippi leads the U.S. this year with 142 reports of tornadoes, but Texas is right behind with 141. Alabama rounds out the top three with 107.

November's 262 damaging wind reports were just above the long-term average of about 200. In all, 24 states saw at least one report of damaging wind, with the lion's share occurring in Alabama (36). Rounding out the top three are Illinois with 31 and Arkansas with 23.

The strongest measured gust this month came from Wilpen, Pennsylvania, on Nov. 27, when an 87-mph gust was measured on an anemometer as a mesovortex passed overhead. 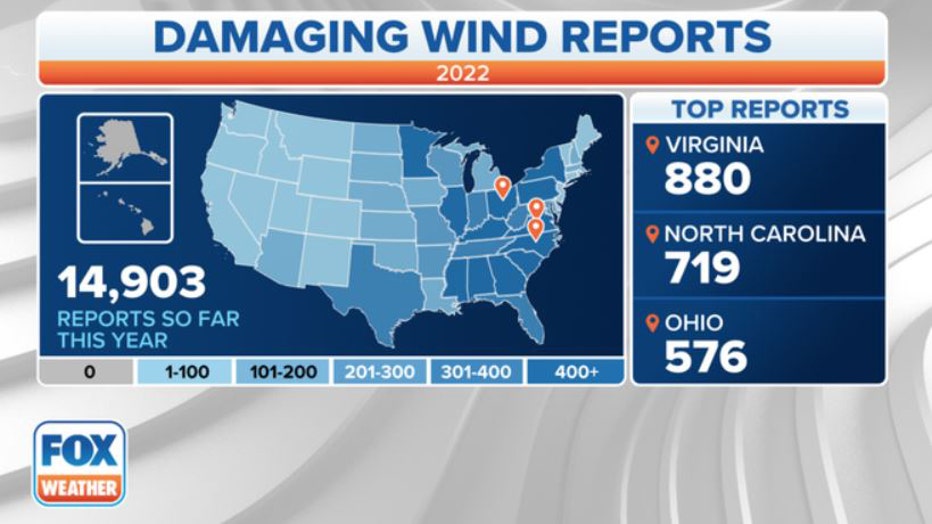 The 63 reports of hail this month were above the long-term monthly average of 38.

Large hail – measured at more than 1 inch in diameter – was reported in 15 states. Texas saw the lion's share with 15 reports. This month's largest also comes from Texas, as a baseball-sized stone fell in Tawakoni on Nov. 4, the day of the first tornado outbreak. 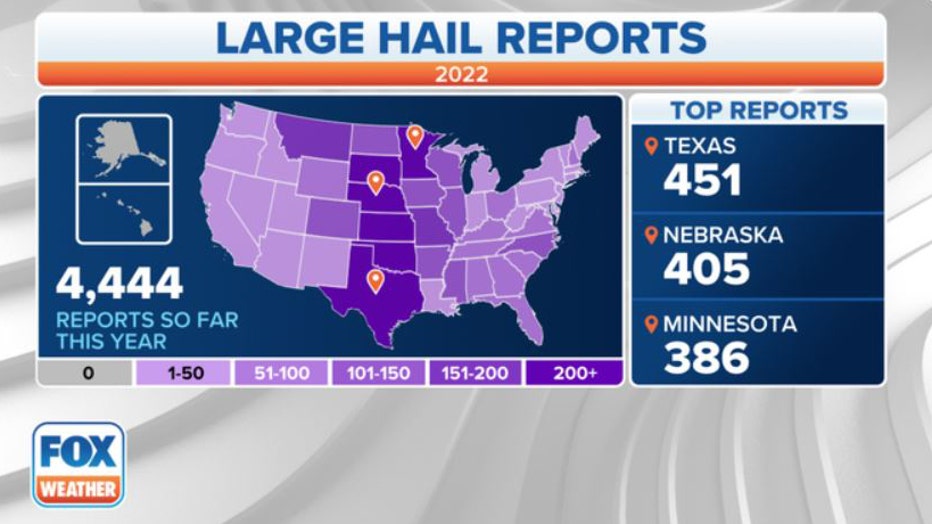 With just 4,444 reports of large hail made this year, we are on pace to finish 2022 significantly below the long-term average of nearly 6,000. Texas, the perennial hail king, leads the U.S. with 451 reports.

November was a relatively quiet month for flash flooding, with just 30 reports in nine states. North Carolina and Alabama lead the U.S. this month with seven reports.

During the year, the U.S. has received 3,723 flash flooding reports, slightly above the long-term average of 3,663.

7 FACTS YOU SHOULD KNOW ABOUT FLASH FLOODS 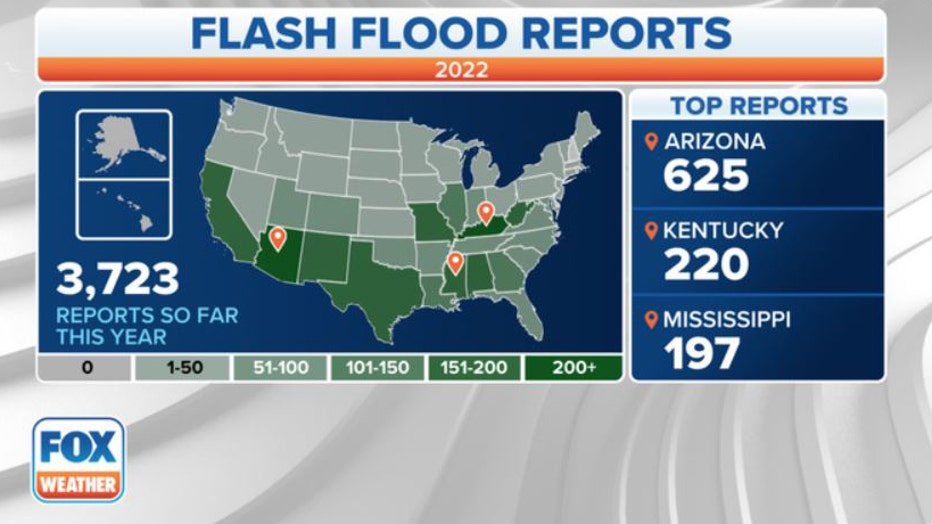 Arizona remains and will end the year as the flash flooding leader with 625 reports in 2022, thanks to another robust monsoon season this summer. Kentucky and Mississippi round out the top three with 220 and 197 reports, respectively.

Get the latest updates on this story at FOXWeather.com.