The non-stop flow of lava from Hawaii’s Mauna Loa volcano has civil defense and transportation officials closely monitoring one of the main highways on the Big Island for the likelihood they’ll have to shut it down due to the ongoing eruption.

Hawaii Route 200 runs more than 50 miles west-to-east across the island and serves as a crucial thoroughfare between Hilo and Kona.

The highway sits in the boundary region that separates Mauna Kea and Mauna Loa and is the most significant infrastructure to be threatened, so far, by the eruption that started on November 27. 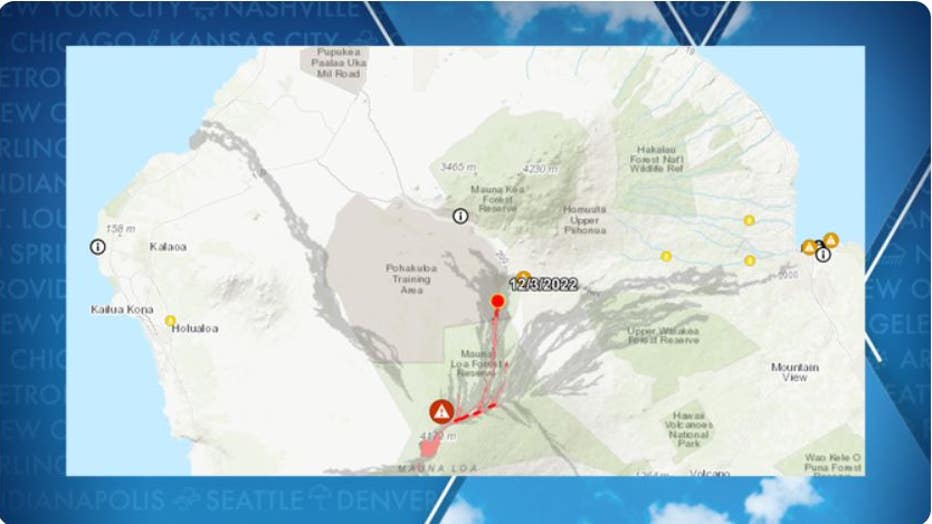 At last report, lava was around two miles from the busy roadway, but the flow had slowed significantly because of the flatter terrain.

"We expect from here on in for the movement of this flow to become somewhat sporadic as it goes across the flat ground. It will inflate, incoming lava will be stored in it, and then it will probably come out in lobes at different times. So it sometimes it might appear to be moving faster and sometimes appear to be not moving at all," said Ken Hon, scientist-in-charge of the Hawaiian Volcano Observatory.

WHAT MAKES ‘PELE’S HAIR’ DURING A VOLCANIC ERUPTION?

The critical route remains open, but if lava reaches the roadway, a shutdown would essentially double travelers’ commute times as there is no other shorter route around the volcano.

Officials have been preparing for the possibility for weeks and said detour routes are clear of obstructions in the event motorists will be forced to use other roadways.

"There’s a lot of uncertainty here. The thing we can say is that at this kind of rate, it would take at least a week for it to reach the highway," Hon said.

Congressional representatives from the fiftieth state have requested the White House expedite federal assistance before daily life is interrupted on the Big Island.

WHEN WILL MAUNA LOA STOP ERUPTING?

"Access restricted by the lava flow can severely impact emergency services as one of the island’s primary hospitals is located in East Hawai’i. Additionally, a traffic diversion will add significant congestion to two state highways," a joint letter to President Biden stated.

More than 200,000 people are residents on the Big Island, but none are immediately threatened by impacts from lava, according to the Hawaii County Civil Defense Agency.