Alec Baldwin, "Rust" producers and the family of cinematographer Halyna Hutchins have reached a settlement. Hutchins died when a gun Baldwin was holding fired while practicing a shot for the film "Rust" on the New Mexico movie set Oct. 21, 2021. The group had been rehearsing in a small church on the set.

New Mexico First Judicial District Attorney Mary Carmack-Altwies will announce whether charges will be brought in the death of cinematographer Halyna Hutchins on Thursday.

There will be no press conference regarding the announcement.

"Regardless of the District Attorney’s decision, the announcement will be a solemn occasion, made in a manner keeping with the office’s commitment to upholding the integrity of the judicial process and respecting the victim’s family," Heather Brewer, spokesperson for the office of the First Judicial District Attorney, said in a statement.

The DA's office did not release any further details.

Hutchins died when a gun actor Alec Baldwin was holding fired while practicing a scene on Oct. 21, 2021. The group had been rehearsing in a small church on the Bonanza Creek Ranch set.

The Santa Fe County Sheriff's Department has spent the last year investigating how live rounds made it onto the movie set. Armorer Hannah Gutierrez-Reed and assistant director Dave Halls were the only other crew members believed to have handled the gun that fired on set.

"Never in a million years did Hannah think that live rounds could have been in the 'dummy' round box," one of Gutierrez-Reed's attorneys, Jason Bowles, said in a statement shared with Fox News shortly after the fatal accident. "Who put those in there and why is the central question."

Halls allegedly handed Baldwin a .45 revolver, telling him that it was "cold," or safe. Prior to that, Gutierrez-Reed spun the cylinder to show Halls what was in the gun, her lawyer said.

Carmack-Altwies named Baldwin specifically in her request for emergency funding to prosecute the case. The DA explained that she anticipated prosecuting up to four individuals — including Baldwin.

"The 'Rust' prosecution could be potentially be prosecutions from one (1) to four (4) defendants," Carmack-Altwies wrote in paperwork filed for an emergency grant. "One of the possible defendants is well-known movie actor Alec Baldwin."

At the time, Baldwin's lawyer released a statement encouraging media outlets to give the DA's office "space to review" a comprehensive report given to the department by the Santa Fe County Sheriff's Office.

Meanwhile, Baldwin has continuously deflected the blame from himself. He previously told Chris Cuomo "every single person" on the set of "Rust" knows who to blame for the tragic death of the cinematographer. 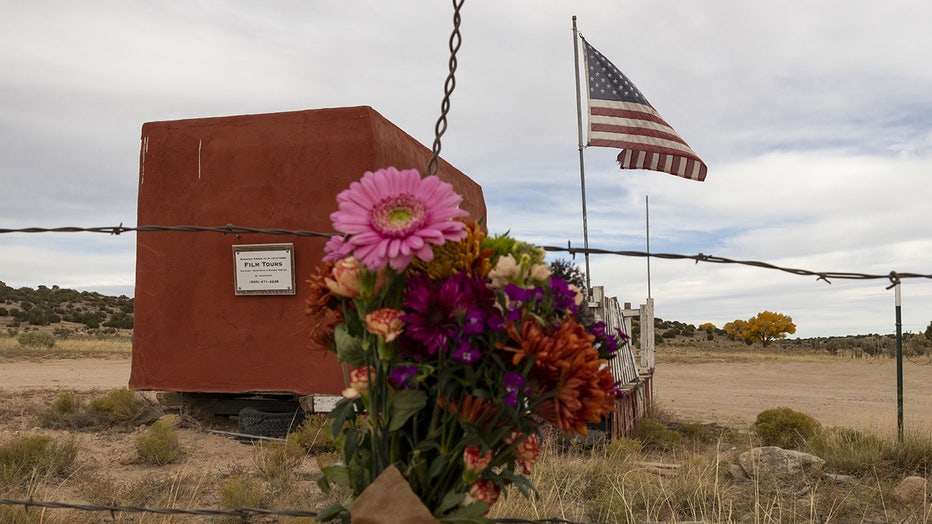 Flowers are seen in the entrance to the film set of "Rust" after Hollywood actor Alec Baldwin fatally shot a cinematographer and wounded a director when he discharged a prop gun on the movie set in Santa Fe, New Mexico, U.S., October 23, 2021. (Photo

While waiting on criminal charges, a wrongful death lawsuit was filed against Baldwin and other key members of the production on Feb. 15, 2022.

The lawsuit named Baldwin and others who "are responsible for the safety on the set" and called out "reckless behavior and cost-cutting" that led to the death of Hutchins, according to the family's lawyer.

The cinematographer's family sued for punitive damages and funeral and burial expenses among other things originally to be determined at trial. However, on Oct. 5, Hutchins' husband Matthew Hutchins announced the civil lawsuit had been settled pending court approval.

Following the conclusion of the civil lawsuit, it was announced that production of the film would resume in January with Matthew Hutchins as an executive producer.

"The production of 'Rust' will not return to New Mexico," Melina Spadone, attorney for Rust Movie Productions LLC, told Fox News Digital. "The production is considering other locations, including in California, but no decisions have been made."

Although it hasn't been confirmed whether Baldwin will rejoin the production, Matthew Hutchins' initial announcement claimed the production would resume with "original principal players."

A representative for Hutchins did not respond to Fox News Digital's immediate request for comment.