Bubbles turn to ice as temperatures plummet in Russia

The footage shows several members of a family blowing bubbles using a bubble gun and straws. The bubbles are seen to instantly freeze. (Credit: @roditeli__7 via Storyful)

YAKUTSK, Russia - How cold was it in Russia? Enough to freeze bubbles.

In a new video, bubbles blown by a family in a remote Russian village froze instantly into balls of ice as an anticyclone carrying Arctic air brought extremely cold temperatures to the area.

The footage, posted to Russian social media service VKontakte by user @roditeli__7, shows several members of a family blowing bubbles using a bubble gun and straws. The bubbles are seen to instantly freeze, with some settling on family members’ hands and on fencing.

The recorder said the footage was filmed on January 15 in Yakutsk when temperatures were -58 Fahrenheit, according to local media. 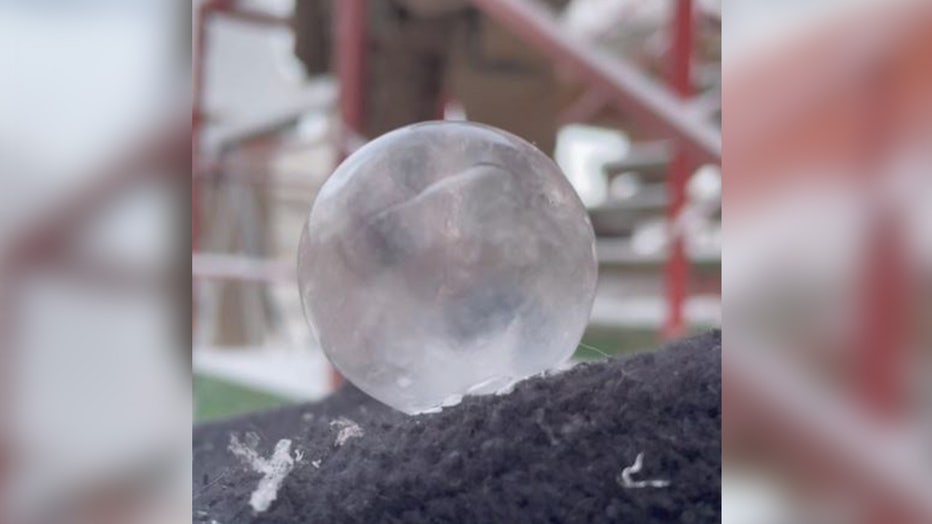 The bubbles are seen to instantly freeze, with some settling on family members’ hands and on fencing. (Credit: @roditeli__7 via Storyful)

On January 10, air temperatures dropped to -61.9 Celsius in the village of Zhilinda in the Republic of Sakha, where Yakutsk is the capital. This was the second time this winter that air temperatures had dropped below -60, according to Meteovesti.ru.

The temperature in the city had not risen above -42 degrees all week, as of January 18, Meteovesti.ru said.

According to Live Science, when the temperature is just right, below about 9 to 12 degrees Fahrenheit, bubbles will freeze.

The online science website notes,"The trick is to blow them up in the air so that they have time to freeze before hitting the ground or another surface. The bubbles will form crystalline patterns and some might break, looking a bit like the shell of a cracked egg."

This story was reported from Los Angeles. Storyful contributed.