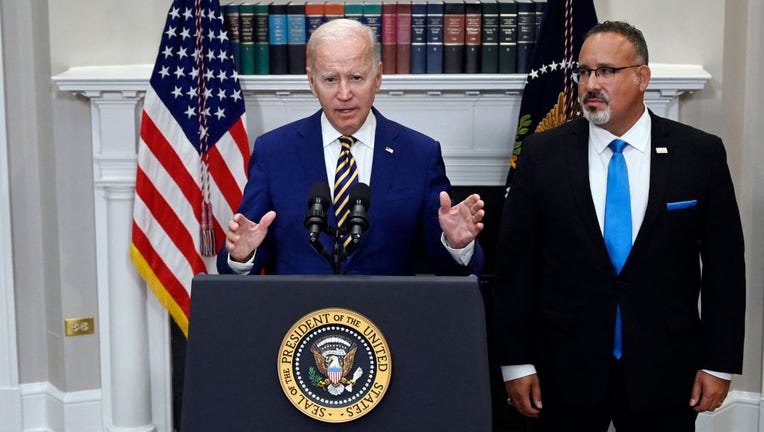 WASHINGTON - The White House is moving forward with a proposal that would lower student debt payments for millions of Americans now and in the future, offering a new route to repay federal loans under far more generous terms.

President Joe Biden announced the repayment plan in August, but it was overshadowed by his sweeping plan to slash or eliminate student debt for 40 million Americans. Despite the low profile of the payment plan, however, some education experts see it as a more powerful tool to make college affordable, especially for those with lower incomes.

Education Department officials on Tuesday called the new plan a "student loan safety net" that will prevent borrowers from getting overloaded with debt.

"Student debt has become a dream killer," Education Secretary Miguel Cardona said. "This is a promise to the American people that, at long last, we will fix a broken system and make student loans affordable."

Biden, a Democrat, is moving forward with the repayment plan even as his one-time debt cancellation faces an uncertain fate before the Supreme Court. The White House has asked the court to uphold the plan and reject two legal challenges from conservative opponents. The Biden administration submitted its brief last week, with oral arguments slated for Feb. 28.

The Education Department formally proposed the new repayment plan on Tuesday by publishing it in the Federal Register, starting a public comment period that often takes months to navigate.

The White House is extending the pause on federal student loan payments through the end of June 2023 in an effort to "alleviate uncertainty" for borrowers as the Biden administration battles at the Supreme Court to put President Joe Biden’s student loan handout into effect. President Biden announced in August that he will hand out $10,000 of federal student loan debt relief for certain borrowers making less than $125,000 per year and up to $20,000 for Pell Grant recipients. President Biden said he is "confident" that his "student debt relief plan is legal." The announcement comes after the Biden administration last week filed an emergency appeal to the Supreme Court, asking to preserve its order to cancel student loan debt. The Justice Department asked the high court to block previous rulings out of Texas and Missouri that ruled the program unconstitutional.

If it's finalized, the proposal would give a major overhaul to income-driven repayment plans — one of several payment options offered by the federal government. The resulting plan would have lower monthly payments, an easier path to forgiveness and a promise that unpaid interest will not be added to a borrower’s loan balance.

The federal government now offers four types of income-driven plans, but the proposal would mostly phase out three of them while focusing on one simplified option, scaling back the confusing array of options borrowers now face.

Under existing plans, monthly payments are capped at 10% of a borrower’s discretionary income, and those earning less than $20,400 a year aren’t required to make payments. The new proposal would cap payments for undergraduate loans at 5% of borrowers’ pay, cutting their bills in half, and require payments only for those who earn more than about $30,000 a year.

Typical graduates of a four-year university would save about $2,000 a year compared with today’s plans, the Biden administration says, while 85% of community college borrowers would be debt-free within 10 years.

RELATED: Student loan forgiveness: What to know if you've applied for relief

Supporters see the proposal as a significant stride toward college affordability. Some say it’s so generous that it approaches free community college — a campaign promise that Biden has pushed but failed to deliver.

Opponents on the right blast the revamped plan as an unfair handout with a steep price tag. The Biden administration estimates the repayment plan would cost nearly $138 billion over the decade, and some critics have put it closer to $200 billion.

Watch: Speaking at Delaware State University, Biden blasted Republicans in Congress for criticizing student loan relief when some of them have had millions of dollars in pandemic relief loans forgiven.

Even some on the left have questioned the prudence of the idea, saying it's so generous that it effectively turns student loans into grants that don’t need to be repaid. That could lead more students to borrow, they warn, and it could spur colleges to raise tuition prices if they know students won’t be on the hook.

Still others have urged the administration to abandon income-driven payment plans entirely, calling them a failed policy. Critics cite a federal report from last year finding that sloppy oversight of the program left thousands of borrowers stuck with debt that should have been forgiven.

Cardona said his agency is working on other proposals that would hold colleges accountable if their students get overburdened with debt. One idea promoted by Biden is to warn the public about programs that leave graduates saddled with debt.

The Education Department on Tuesday began the process to deliver that goal, asking the public about the best way to identify "low-value" programs.