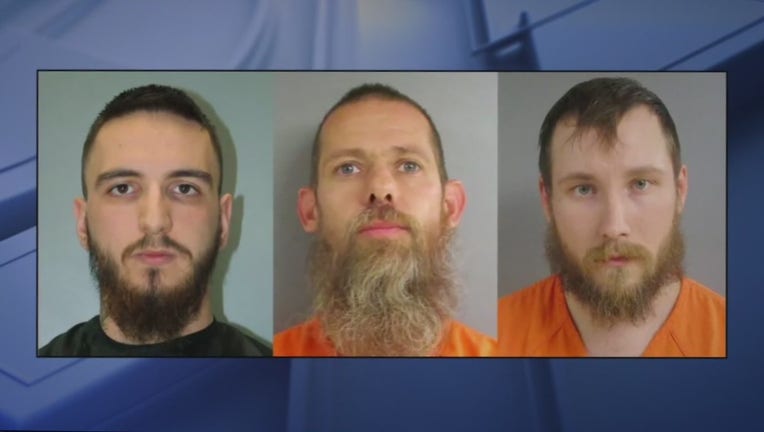 LANSING, Mich. (AP) - One of three men who forged an early alliance with the leader of a plot to kidnap Michigan's governor was sentenced Thursday to seven years in prison for assisting him before the FBI disbanded the scheme in 2020.

Bellar's sentencing came shortly after Pete Musico and Musico's son-in-law Joe Morrison were given 12-year and 10-year prison sentences, respectively. They were convicted in October of providing material support for a terrorist act, which carries a maximum term of 20 years.

Morrison, Musico and Bellar were members of a paramilitary group known as the Wolverine Watchmen. Gov. Gretchen Whitmer was never physically harmed by the plot.

The trial in state court was separate from a prosecution in federal court where two leaders, Adam Fox and Barry Croft Jr., were convicted of a kidnapping conspiracy. Two more men pleaded guilty and two others were acquitted.

Read more about the plot here.

Whitmer, a Democrat recently elected to a second term, was never physically harmed. Undercover FBI agents and informants were inside Fox’s group for months, and the scheme was broken up with 14 arrests in October 2020.

Morrison, Musico and Bellar were members of a paramilitary group known as the Wolverine Watchmen. They held gun training with Fox in rural Jackson County and shared his disgust for Whitmer, police and public officials, especially after COVID-19 restrictions disrupted the economy and triggered armed Capitol protests and anti-government belligerence.

A Jackson County judge handed down the longest prison terms so far in the plan to kidnap Michigan Governor Gretchen Whitmer - but more sentences are coming.

But defense attorneys argued that the trio had cut ties with Fox before the Whitmer plot came into focus by late summer of 2020; Bellar had moved to South Carolina in July. The three men also didn’t travel with Fox to look for the governor’s second home or participate in a key training session inside a "shoot house" in Luther, Michigan.

"Mr. Bellar is clueless about any plot to kidnap the governor," attorney Andrew Kirkpatrick said again in a court filing last week.

A jury, however, quickly returned guilty verdicts in October after hearing nine days of testimony, mostly evidence offered by a pivotal FBI informant, Dan Chappel, and federal agents. The jury agreed with prosecutors that the Wolverine Watchmen constituted a criminal gang.

Separately, in federal court in Grand Rapids, Fox and Croft face possible life sentences in two weeks. Two men who pleaded guilty received substantial breaks: Ty Garbin is free after a 2 1/2-year prison term while Kaleb Franks was given a four-year sentence. Brandon Caserta and Daniel Harris were acquitted by a jury.

When the plot was foiled, Whitmer blamed then-President Donald Trump, saying he had given "comfort to those who spread fear and hatred and division." In August, after 19 months out of office, Trump said the kidnapping plan was a "fake deal."