Los Angeles police officials are thanking the public and security staff for preventing a possible mass shooting from taking place. This comes after police found a sniper rifle, two assault rifles and a "thousand of rounds" of ammo from the home of a man who lived in a Hollywood high-rise apartment with large windows. The Los Angeles Police Department responded to a call of a man possibly suffering from a mental health crisis, saying the security guards at the high-rise building located at Sunset Boulevard and Gordon Avenue reported a resident had been making threats. Officers then searched the 25-year-old suspect's Hollywood home and found all the aforementioned weapons on the 18th floor – where he lives. Officials later identified the suspect as Braxton Kyle Johnson. One neighbor said Johnson had mentioned he had a military background and that Johnson believed the CIA was after him. More LiveNOW from FOX streaming video

Three men were wounded in a shooting at a metro station in Washington D.C. on Wednesday morning, according to D.C. police.

Ten people were wounded when several gunman opened fire in a drive-by shooting Monday afternoon in Lakeland, Florida, east of Tampa. During a news conference on Monday night, the Lakeland police chief said the attack appeared "targeted" and "not random." As of that news conference, the shooters had not been located or identified.

This is at least the sixth mass shooting in California this month.

For the third straight year, the U.S. in 2022 recorded over 600 mass shootings in which at least four people were killed or injured, according to the Gun Violence Archive.

Los Angeles police say three people are dead and four others critically wounded after a shooting in the Beverly Crest neighborhood on Saturday morning.

Police said the gunman was "neutralized," a term that typically means he was killed.

Authorities say Huu Can Tran hadn’t been to the dance hall in at least five years and did not appear to target the victims specifically. Police are still investigating a motive for the shooting.

A shooting near Red Springs, North Carolina has killed three people and left another person seriously wounded, according to the sheriff in Roberson County. He added the suspect has been taken into custody.

California is reeling from three major mass shootings in just over a week. Gov. Gavin Newsom says he is fatigued and frustrated by the senseless violence.

The massacre was the nation’s fifth mass killing this month. It dealt another blow to a community that has been the target of high-profile violence in recent years.

Experts say an alert should have been sent out immediately after police responded to the shooting in Monterey Park that left 11 dead. During the delay, the shooter walked into another dance club with his weapon, but was disarmed.

Thomas Wong, a councilmember in Monterey Park, Ca. joined LiveNOW from FOX's Josh Breslow to discuss the recent shooting in the community that claimed eleven lives.

With two deadly mass shootings in California and another in Washington in a matter of days, Chris Grollnek with the Active Shooter Prevention Project joined LiveNOW from FOX's Josh Breslow with more about keeping yourself safe.

The death toll rises to 11 after a shooting in Monterey Park, California over the weekend. FOX 11 LA's Mario Ramirez joined LiveNOW from FOX's Josh Breslow with the latest on the investigation and more on the victims.

At least seven people are dead and a suspect is in custody after two separate shootings in Half Moon Bay, California. FOX 2 San Francisco's Allie Rasmus joined LiveNOW from FOX's Josh Breslow with the latest on the investigation. 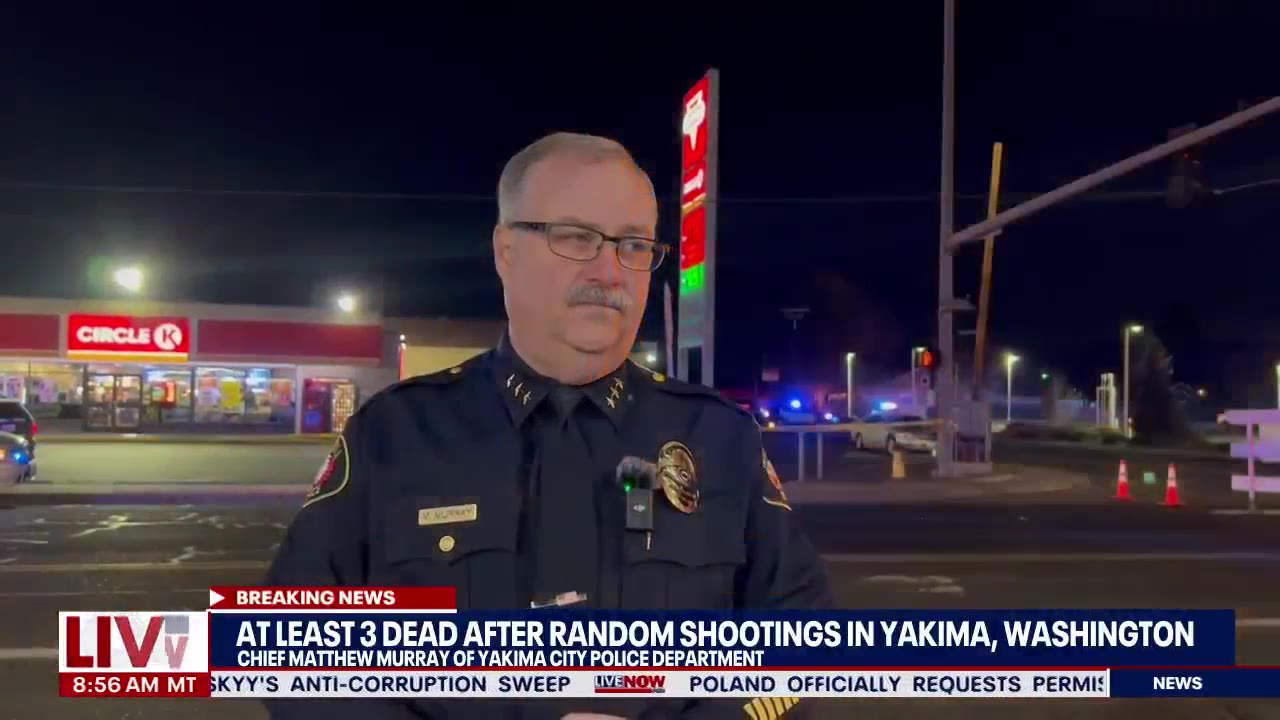 At least three people have died after a gunman opened fire inside of a Circle K in Yakima, Washington on Tuesday morning, according to the police chief. The chief described the shootings as "random" and said the suspect remained unidentified.

Investigators searching for a motive in the worst mass shooting in Los Angeles County history say a search of the gunman’s home discovered a rifle, hundreds of rounds of ammunition and evidence he was manufacturing gun silencers.

Police say 10 people were shot to death and 10 others were hurt overnight following a Lunar New Year celebration.

Police said the suspect who killed 10 people and wounded 10 others at a Lunar New Year celebration is an Asian male.