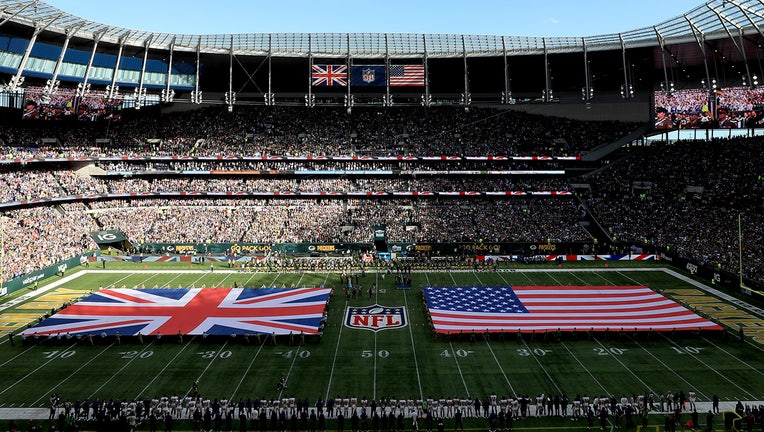 The British and American flags on the picth during the national anthems during the NFL International match at Tottenham Hotspur Stadium, London. Picture date: Sunday October 9, 2022. (Photo by Bradley Collyer/PA Images via Getty Images)

The Chiefs and Patriots will play in Germany. The Bills, Titans and Jaguars will play in London. The Bills and Titans are the designated home teams for two games at the Tottenham Hotspur Stadium, while the Jaguars will host a game at Wembley Stadium as part of their multi-year commitment to playing in the United Kingdom.

The league announced the plans on Thursday.

Opponents, dates and times for the games will be released when the full schedule is announced later this year.

There will be no international game in Mexico in 2023 due to renovations taking place in Estadio Azteca in Mexico City.

"We have a long history and we continue to grow but these international games are pivotal," NFL executive Peter O’Reilly told the AP. "Those who have been there and experienced it, you just see the passion of the fans in these markets. This is the chance for them to experience the best of the NFL live and it’s an opportunity for year-round engagement with the fans there. There’s nothing bigger and better than an NFL game and those teams to be there in those markets and putting it on in a stadium."

MORE NFL: Damar Hamlin says 'heart is with' team as Bills advance with win over Dolphins

The Tampa Bay Buccaneers defeated the Seattle Seahawks in Munich in the NFL’s first regular-season game in Germany this season. The destination cities for the 2023 games will be announced later this year. The NFL previously confirmed that Munich and Frankfurt will host games in Germany over the next four years.

The Chiefs and Patriots are part of the league’s International Home Marketing Area program, which sees teams secure international marketing rights in countries beyond the United State, with both sides having been awarded rights in Germany.

The NFL was formed in 1920 when 10 football teams came together in Canton, Ohio, and started the American Professional Football Association (APFA), now known as the NFL.

The five international games in 2022 set record-breaking attendance and viewership with ticket demand and number of fans increasing for the league across the world. Each game was sold out with a total of 356,116 in attendance.

The Chiefs, Bills and Jaguars are playing AFC divisional playoff games this weekend.

"We could not be more excited to participate in a Germany game and introduce more of the world to Chiefs Kingdom this fall," Chiefs chairman and CEO Clark Hunt said in a statement. "Our team and our fans have had incredible experiences in London and Mexico City as part of the International Series in the past, and we look forward to helping the NFL in its effort to continue growing the game in Germany."

The Patriots are 3-0 in international games.

"We are thrilled to be selected to play in Germany this year," Patriots chairman and CEO Robert Kraft said. "We are undefeated in our three previous international games, thanks in part to the outstanding support from our fans. We know that some of our most passionate fans reside in Germany, and we look forward to finally playing a game there. We know the fans will create an amazing atmosphere. We are sure it will be a memorable experience and one of the highlights of the 2023 season."

MORE NFL: Peyton Hillis is off ventilator, 'on road to recovery' after saving kids from drowning, girlfriend says

The NFL’s expansion to 17 regular-season games gives teams a ninth home game in alternating seasons. Up to four of the teams from the conference whose teams are eligible for that ninth regular-season home game are designated to play a neutral-site international game each year.

The league continues to explore playing more games internationally and the possibility of placing a franchise abroad.

"There’s nothing imminent," said O’Reilly, the NFL’s executive vice president, club business, major events and international. "There’s certainly complexities to work through if you’re going to have a team in Europe. That’s our responsibility to continue to look and see what’s viable. The fact we’re having this conversation is the capacity that exists in these markets. We have terrific stadiums, good governmental partners. Those are building blocks but it’s a complex process that takes times and alignment but it’s our responsibility to do the work and the analysis."