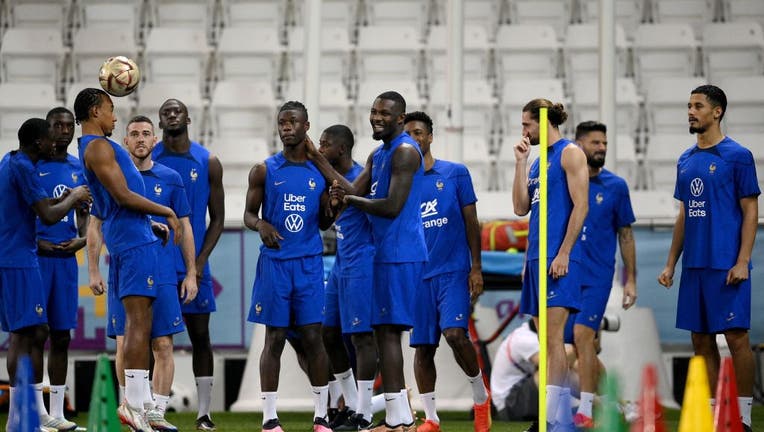 France's players arrive for a training session at the Jassim-bin-Hamad Stadium in Doha on December 12, 2022, in the build-up to the Qatar 2022 World Cup semi final football match between France and Morocco. (Photo by FRANCK FIFE / AFP) (Photo by FRAN

AL KHOR, Qatar - It had become so rare for World Cup holders to produce even a competent showing — let alone successfully defend their title — at the subsequent competition that it was easy to write off France's chances before the 2022 event in Qatar had even begun.

Even casual World Cup fans knew the history: at the three tournaments before this one, the champions went home in the first round. So when Les Bleus arrived in Doha last month on a dispiriting 1W-3L-2T run and minus two linchpins (central midfielders N'Golo Kanté and Paul Pogba) from their all-conquering 2018 squad, plus the reigning Ballon d'Or recipient as the world's best player (Karim Benzema), recent history seemed destined to continue.

Instead, after beating England 2-1 on Saturday on goals by Aurélien Tchouaméni and Olivier Giroud, France looks destined to become the first nation to win consecutive World Cups since Brazil did it in 1962.

Journalist Grant Wahl -- one of the most respected soccer reporters in the country -- died while covering the World Cup, his brother announced Friday. He was 48 years old.

"I'm sorry, but you're getting ahead of yourself," French coach Didier Deschamps said afterward when asked about the possibility of repeating. "We're going to the semifinals. We're getting closer to the final.

"In the past, though, the world champions didn't always do well in the next World Cup, and we've managed to overcome that challenge," he added with a knowing smile.

Of course, the longtime Les Bleus manager, who four years ago became just the third man to hoist the most coveted trophy in the sport as both a player and coach, knows that France took a huge step on Saturday. This was the best England team in decades, and despite being outplayed for long stretches at Al Bayt Stadium, the champs dispatched them with relative ease. France will now play Morocco on Wednesday (2 p.m. ET, FOX and the FOX Sports app) for a place in the Dec. 18 final.

"We knew it was going to be difficult from start to finish," said Tchouaméni, who opened the scoring just 17 minutes in on a blistering long-range strike but also conceded a clumsy penalty that Harry Kane converted to cancel it out. "We know that we haven't won anything yet."

It was a common refrain from the French players post-match. That's part of the reason this side seems different. There is a quiet confidence brewing, and it's beginning to percolate at the perfect time.

"The more you win games, the stronger you get," Deschamps said. Then, as if catching himself veering from the messaging that has gotten his team here, he added the qualifier. "You shouldn't forget that you need to be humble though. We can't get carried away."

US eliminated from World Cup

The Netherlands beat the Americans 3-1 to advance to the quarterfinals.

France isn't getting carried away, which is precisely what makes them so dangerous. Lionel Messi and Argentina may be the bookies' new favorite to win this World Cup after Croatia eliminated Brazil on Friday, but don't bet against the French. They have both momentum and know-how. According to Giroud, there's a familiar feeling inside the French camp.

"It reminds me of the success of 2018," he said. That's a bold statement. One could argue that he's wrong. Truth be told, this France team looks better in just about every way.

Converted striker Antoine Griezmann, who assisted on Giroud's winner, has stepped into the two-way midfield role that Pogba occupied and added attacking swagger. The 22-year-old Tchouaméni has been a more athletic, more dynamic, more offensive version of Kanté. Imposing target forward Giroud, who famously didn't score during France's run to glory at the last World Cup, has stepped in for Benzema seamlessly and now has four goals in five games.

Les Bleus didn't even need Kylian Mbappe to beat England; the leading scorer at Qatar 2022 was marked out of the match by Kyle Walker and a rotating cast of other English defenders. Speaking of defending, the 2022 French squad is also better at that, as they showed Saturday by beating back wave after wave of Three Lions attacks.

It wasn't a perfect performance, to be sure. Theo Hernández's inexplicable body check on Mason Mount shortly after Giroud's goal nearly cost them dearly, but Kane sailed his second spot kick of the night over Hugo Lloris' net with six minutes of regular time to go.

"Certain things perhaps we could have done better," Deschamps said. It's still hard to quibble with the outcome. And while they're still not quite there yet, these French players have the look of a champion. With their sternest test yet aced, they know the opportunity to claim their own bit of history is there for the taking.

"Our mindset is what allows us to win," right back Jules Koundé said. "We are where we wanted to be, but there are still two more steps left."

Read more of this story from FOX Sports.