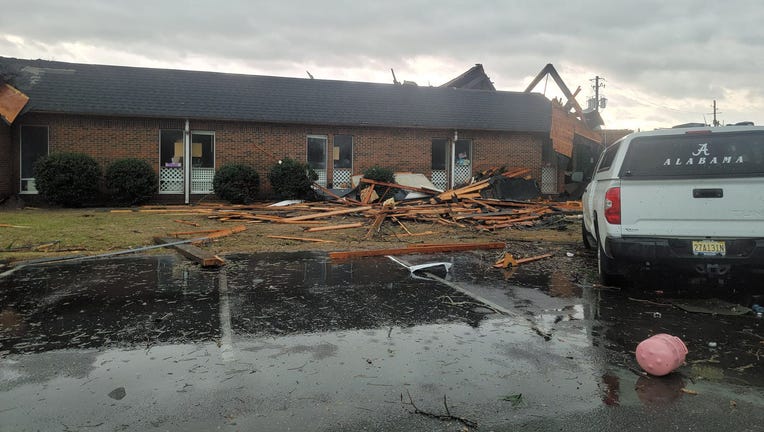 Daycare damaged by a tornado in Selma, AL (Amanda McCloud)

SELMA, Ala. - Amanda McCloud is happy to be alive after the daycare where she works was destroyed by a tornado that moved through Selma, Alabama, on Thursday.

"The worst day of my life," McCloud stated.

She said the staff was inside Crosspoint Christian Daycare watching after the children when the tornado approached.

"We thought that building was safer, so my co-worker loaded her four infants in a baby bed that had wheels, and I put mine in bouncers, and we took off with the help of a few adults," McCloud explained. "So we got to the other building, and all the bathrooms were full, so we rushed in my boss's office."

Daycare damaged by a tornado in Selma, AL (Amanda McCloud)

That's when the power went out, and the roof started to collapse.

"I put myself on a 7-week-old, and I'm screaming at this point. It was pouring rain on us, so I ran to the bathroom that was right beside us, and they had their roof, so I said we have to (go) in here," she explained. "So, I ran back and forth with my babies to hand them off, as well as my co-worker."

While working to keep the children safe, she found a baby in the rubble.

"I found one under a bunch of tiles; she is the one that has a small cut on her forehead and cheek," McCloud said.

'This was my mom's house': Damage after deadly tornadoes rip through Alabama

Deadly tornadoes tore through Alabama on Jan. 12, 2023. Footage shows damage and fallen trees in the city of Greensboro.

She took the child back to her co-worker but immediately smelled a gas leak and worked to get herself and the children away from the building.

Not long after, she said police and firefighters arrived and helped the nearly 70 children and staff seek refuge in a nearby church.

McCloud said she was so thankful that everyone was okay during the "scariest day of my life."