KYIV, Ukraine - Christmas lights at a train station in Ukraine’s capital are being powered by an exercise bike, a subtle show of resistance as residents grapple with ongoing power outages from Russian air strikes.

Alexander Kamyshin, the CEO of state-owned Ukrainian Railways, posted a video showing a man cycling on a stationary exercise bike at the Kyiv-Pasazhyrskyi train station in Kyiv. The video demonstrates how the peddling ultimately generates power for an attached string of lights.

"War? Blackout? No Christmas tree? You never guess what we invented," Kamyshin wrote in a tweet on Saturday, alongside the video.

Moscow has targeted Ukraine’s energy infrastructure since October as part of a strategy to try to leave the country without heat and light during the bitterly cold winter.

RELATED: Russia warns of ‘consequences’ if US missiles are sent to Ukraine

Many responded to the video, commending the ingenuity and Ukrainian’s "spirit and resolve."

"One of the explanations why Ukraine didn't fall after 3 days and why it will survive," one person wrote on Twitter in response.

"The spirit, ingenuity and drive of the Ukrainian community never cease to amaze me," another added. 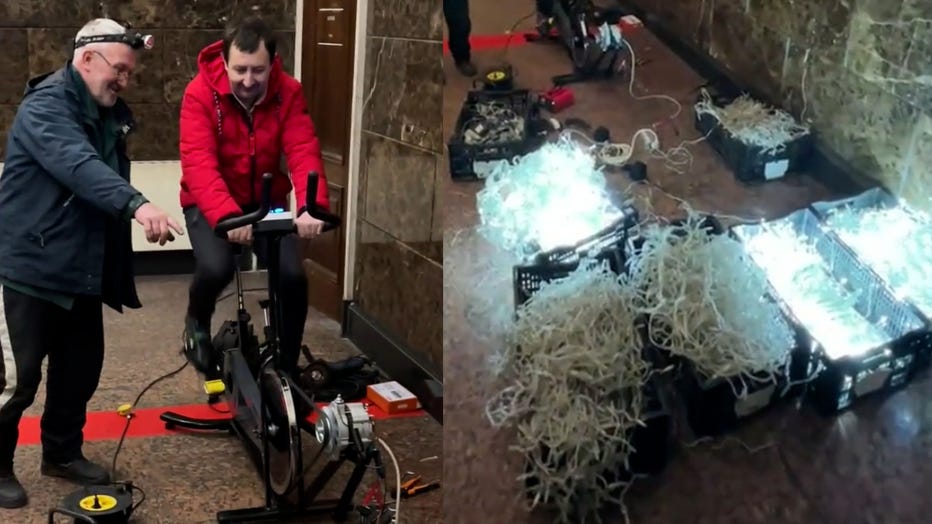 Screengrabs from a video show a person on an exercise bike at the Kyiv-Pasazhyrskyi train station in Kyiv, Ukraine. (Credit: Alexander Kamyshin via Storyful)

On Friday, Ukrainian officials said Kyiv had been hit by one of Russia's biggest assaults on the city since the war started in February. Before dawn on Monday, multiple explosive drones once again attacked Kyiv while the city slept, officials said on Telegram.

No major casualties were reported from the attack, although the Ukrainian president’s office said the war killed at least three civilians and wounded 11 elsewhere in the country between Sunday and Monday.

The drone barrage caused emergency power outages in 11 central and eastern regions of the country, including the capital region, authorities said.

Monday was St. Nicholas Day, an occasion that marks the start of the Christmas holidays in Ukraine and is when children typically receive their first gifts hidden under pillows.

"This is how Russians congratulated our children on the holiday," Serhii Kruk, the head of Ukraine's State Emergency Service, wrote on Telegram, attaching photos of firefighters barely distinguished amid the flames of an infrastructure facility that got hit.

"In the night when everyone is waiting for a miracle, the terrorist country continues to terrorize the peaceful Ukrainian people," Ukraine’s human rights chief, Dmytro Lubinets, said.

"A 100% air defense shield for Ukraine will be one of the most successful steps against Russian aggression," Zelenskyy said by video link at a northern European regional threat conference in Latvia. "This step is needed right now."

RELATED: Kids facing the trauma of war in Ukraine comforted by dog therapy