There are three factors that could lead to inflation which include demand-pull inflation, cost-push inflation and built-in inflation.

WASHINGTON (AP) - Inflation in the United States slowed again last month in the latest sign that price increases are cooling despite the pressures they continue to inflict on American households.

Consumer prices rose 7.1% in November from a year ago, the government said Tuesday. That was down sharply from 7.7% in October and a recent peak of 9.1% in June. It was the fifth straight decline.

Measured from month to month, which gives a more up-to-date snapshot, the consumer price index inched up just 0.1%. And so-called core inflation, which excludes volatile food and energy costs and which the Federal Reserve tracks closely, slowed to 6% compared with a year earlier. From October to November, core prices rose 0.2% — the mildest increase since August 2021.

All told, the latest figures provided the strongest evidence to date that inflation in the United States is steadily slowing from the price acceleration that first struck about 18 months ago and reached a four-decade high earlier this year. 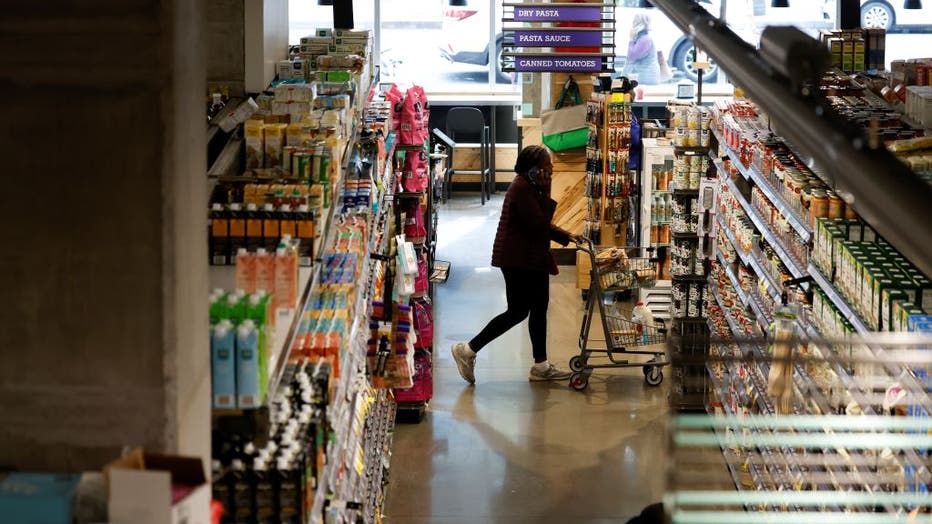 A customer shops at a supermarket in Washington, D.C., the United States, on Oct. 28, 2022. U.S. consumer sentiment ticked upward somewhat in October, although inflation continued to strangle the incomes of many American households. (Photo by Ting Sh

Gas prices have tumbled from their summer peak. The costs of used cars, health care, airline fares and hotel rooms also dropped in November. So did furniture and electricity prices.

Grocery prices, though, remained a trouble spot last month, rising 0.5% from October to November and 12% compared with a year ago. Housing costs also jumped, though much of that data doesn't yet reflect real-time measures that show declines in home prices and apartment rents.

RELATED: Average price of gas plunges to cheapest in over a year

"Inflation was terrible in 2022, but the outlook for 2023 is much better," said Bill Adams, chief economist for Comerica Bank. "Supply chains are working better, business inventories are higher, ending most of the shortages that fueled inflation in 2020."

President Joe Biden called the inflation report "welcome news for families across the country" and noted that lower auto and toy prices should benefit holiday shoppers. Still, Biden acknowledged that inflation might not return to "normal levels" until the end of next year. 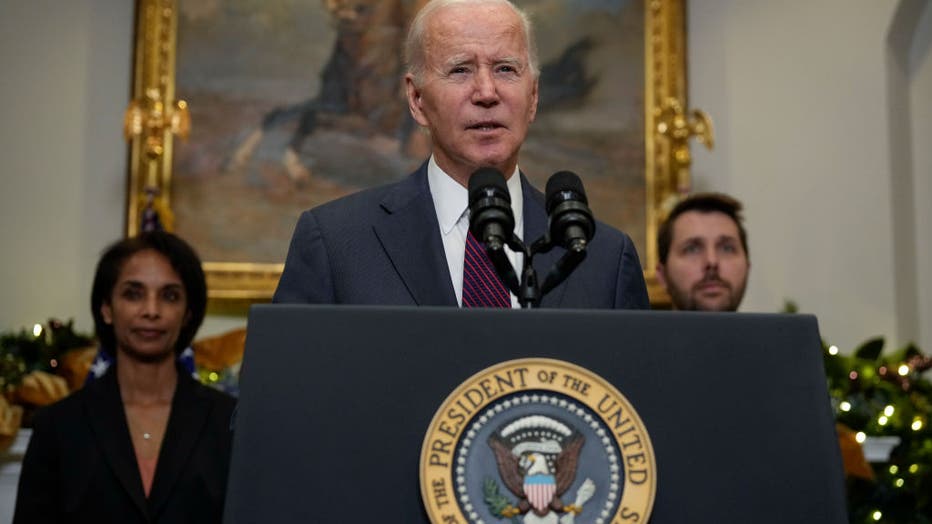 Flanked by Chair of the Council of Economic Advisers Cecilia Rouse (L) and Director of the National Economic Council Brian Deese (R), U.S. President Joe Biden speaks in the Roosevelt Room of the White House December 13, 2022 in Washington, DC. Presid

One sign of progress in November's figures was that prices for new cars didn't budge from October. On average, new cars are still 7.2% costlier than they were a year ago. But that's down from a 13.2% year-over-year jump in April, which was the highest on records dating to 1953.

The decline in new-car prices helps illustrate how supply chain snarls, which have unwound for most goods, are also easing for semiconductors and other key automotive parts. Economists say this should enable automakers to boost production and give buyers an expanded supply of vehicles.

It also suggests that the Federal Reserve's aggressive interest rate hikes, which have made it more expensive to borrow for homes, cars and on credit cards, have begun to slow demand and limit the ability of auto dealers to charge more.

Wall Street welcomed the better-than-expected inflation data as providing further support for the Fed to slow and potentially pause its rate hikes by early next year. The S&P 500 stock index was up more than 1%, in late-morning trading.

On Wednesday, the Fed is widely expected to raise its benchmark rate by a half-point, its seventh hike this year. The move would follow four three-quarter point hikes in a row. A half-point increase would put the Fed's key short-term rate in a range of 4.25% to 4.5%, the highest in 15 years.

The increase will further raise loan rates for consumers and businesses. Economists have warned that in continuing to tighten credit to fight inflation, the Fed is likely to cause a recession next year.

"There’s growing evidence that the worst of the inflation scare may be in the rearview mirror," said Jim Baird, an economist at Plante Moran Financial Advisers. "On the horizon is the potential for a recession — the next hazard in the road that policymakers will need to navigate the economy around or potentially through."

Fed Chair Jerome Powell has said he is tracking price trends in three separate categories to best understand the likely path of inflation: Goods, excluding volatile food and energy costs; housing, which includes rents and the cost of homeownership; and services excluding housing, such as auto insurance, pet services and education.

In a speech two weeks ago in Washington, Powell noted that there had been some progress in easing inflation in goods and housing but not so in most services. Some of those trends extended into last month's data, with goods prices, excluding food and energy, falling 0.5% from October to November, the second straight monthly drop.

Housing costs, which make up nearly a third of the consumer price index, are still rising. But real-time measures of apartment rents and home prices are starting to drop after having posted sizzling price acceleration at the height of the pandemic. Powell said those declines will likely emerge in government data next year and should help reduce overall inflation.

RELATED: Apartment rental prices may finally be falling in US, data shows

As a result, Powell's biggest focus has been on services, which he said are likely to stay persistently high. In part, that’s because sharp increases in wages are becoming a key contributor to inflation. Services companies, like hotels and restaurants, are particularly labor-intensive. And with average wages growing at a brisk 5%-6% a year, price pressures keep building in that sector of the economy.

Prices for many services kept rising in November. Dental care jumped 1.1% just from October and is 6.4% costlier than it was a year ago. Restaurant prices rose 0.5%. They're 8.5% higher than a year earlier.

Auto insurance prices jumped 0.9% in November and are 13.4% more expensive than a year earlier. The average cost of an auto repair rose 1.3% last month and 11.7% over the past year.

Yet even in services, excluding housing, there were some signs of cooling prices. The cost of car rentals, airline fares and hotel prices, for example, all dropped in November.

Overall, a measure that approximates services excluding rent was unchanged in November, after having dipped 0.1% in October. That measure had soared 1.1% in both April and June this year.