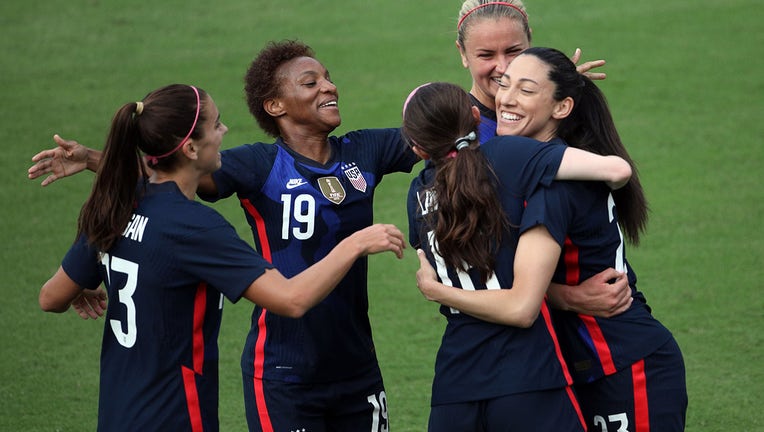 File: USA forward Christen Press celebrates after scoring a first half goal against Brazil during their SheBelieves Cup international soccer tournament game at Exploria Stadium in Orlando, Florida on February 21, 2021. (Photo by GREGG NEWTON/AFP via

The House has passed a bill that ensures equal compensation for U.S. women competing in international events, a piece of legislation that came out of the U.S. women's soccer team's long battle to be paid as much as the men.

The Equal Pay for Team USA Act, passed late Wednesday, will require all athletes representing the United States in global competition to receive equal pay and benefits in their sport, regardless of gender. It covers America's 50-plus national sports and requires the U.S. Olympic and Paralympic Committee to handle oversight.

The bill had earlier passed the Senate with unanimous support. It now heads to President Joe Biden’s desk.

The bill stems from a federal gender discrimination lawsuit the U.S. women filed against U.S. Soccer in 2019. Earlier this year, the women signed a new collective bargaining agreement that included identical pay structures for men and women and equitable distribution of World Cup prize money.

Over the past decade, most Olympic sports in the U.S. have met USOPC standards regarding equal compensation. But there remained inequities between the men's and women's soccer teams — whose roles in international events, such as the World Cup, resulted in unequal pay structures and different oversight — that led legislators to seek to enshrine those standards into law.

"By sending this legislation to the President, both houses have sent a clear message that this is the standard for all National Teams in all sports and it underscores the importance of working with our athletes to achieve equal pay including equalizing international prize money," U.S. Soccer President Cindy Parlow Cone said in a statement announcing the bill's passage.