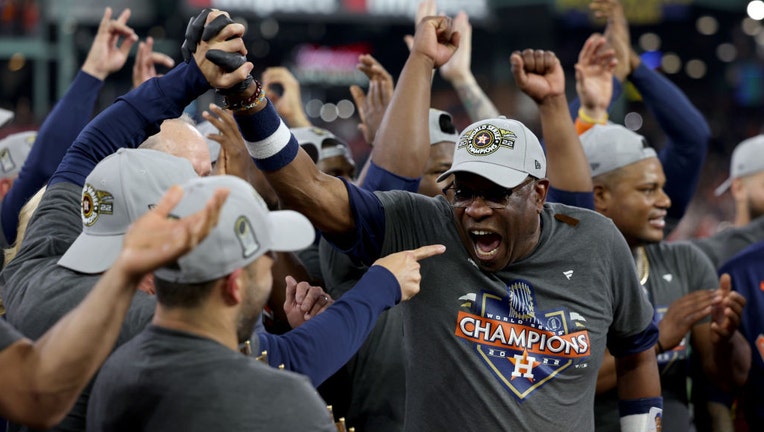 Dusty Baker's run to a World Series title win was one of the several memorable sports stories in 2022, on and off the field.
One of the most respected people in baseball, the one thing missing from Baker's resume: a World Series ring as a manager.

Baker finally got the elusive ring with the Houston Astros while erasing some of the taint of sign-stealing 2017 title in one of the best moments of the year in sports.

"Had this happened years ago, I might not even be here," Baker said. "So maybe it wasn’t supposed to happen so that I could hopefully influence a few young men’s lives and their families and a number of people in the country through showing what perseverance and character can do for you in the long run."

Baker won a World Series with the Los Angeles Dodgers, but had gone 25 years without winning one as a manager. He had been to the Fall Classic twice before without winning and was the winningest manager without a title before the Astros beat the Philadelphia Phillies in six games.

"To be the team that was able to pull it off for him, I know how much it means to him and it means so much to us," Astros pitcher Justin Verlander said.

Aaron Judge also made the headlines by breaking the American League record with his 62nd homer, leading to a record nine-year, $360 million contract.

There were several off-field stories that made headlines — Brittney Griner, Dan Snyder and the Commanders, Suns owner Robert Sarver — but Baker's long-awaited title win wasn't the only redemptive sports story in 2022.

— In the NBA, the Golden State Warriors regained their past magic and solidified their dynasty with a fourth NBA title in eight years, but first since 2018. Stephen Curry was again the catalyst, solidifying his claim as the greatest shooter in NBA history with another dynamic performance.

— In men's college basketball, Kansas re-established its blue-blood status in college basketball by mounting the biggest comeback in national championship history, rallying from 16 points down to beat North Carolina for its fourth national championship. The win came after an epic Final Four matchup between Tobacco Road rivals North Carolina and Duke.

— In women's college hoops, South Carolina did something no other team had been able to accomplish, handing UConn’s Geno Auriemma his first lost in 12 national title games.

— The veterans ruled most of the men’s tennis majors, with Rafael Nadal winning the Australian Open and French Open to stretch has Grand Slam record to 22 titles. Novak Djokovic won Wimbledon, but didn’t get a chance to play in Australia or the U.S. Open because of his vaccination status.

— Spain’s Carlos Alcaraz was the lone youngster among the Grand Slammers , breaking through to win the U.S. Open at 19. Iga Świątek won two Grand Slam titles in 2022, including a U.S. Open that saw the farewell of Serena Williams after 23 titles.

The Colorado Avalanche cranked up the way-back machine, winning their first Stanley Cup title since 2001 by beating the reigning champion Tampa Bay Lightning in six games. The uber-talented core that suffered through several early postseason exits looks like a group that could be more than one-and-done with the Cup.

— The Los Angeles Rams proved that home cooking is best, beating the Cincinnati Bengals 23-20 to become the second straight team to win the Super Bowl at their home stadium after Tampa Bay did it the year before. The Super Bowl title was the Rams' first since 2000, when the franchise was in St. Louis.

— In the College Football Playoffs, Georgia pulled off a similar move in football, knocking off Alabama and Nick Saban for the program’s first national championship in 41 years.

The Winter Olympics in Beijing, still grappling with the effects of the pandemic, saw American figure skater Nathan Chen earn gold after his flameout at the Pyeongchang Games four years earlier.

Lindsey Jacobellis, long known for her blunder at the 2006 Torino Games, finally won gold in snowboard cross and added another in the mixed-team event.

Chloe Kim proved she was the queen of the halfpipe, winning her second straight gold and Finland won its first hockey gold by beating favored Russia in the final.

Out on the fairways:

— LIV: The Saudi-backed LIV made waves that reverberated across the golf world, with several major players abandoning the PGA and European tours to cash in on the riches of the lucrative tour.

— On the PGA Tour, the young guys moved to the forefront. Scottie Scheffler won The Masters, Justin Thomas the PGA Championship, Matt Fitzpatrick took the U.S. Open and Cameron Smith won the British Open, marking the first time all four majors were won by players under 30 in the same year.

Youth prevailed at the Daytona 500 as well, with rookie Austin Cindric taking the checkers. Marcus Ericsson, a former Formula One backmarker, became the second Swedish driver to win the Indianapolis 500 by holding off some of the biggest names in North American auto racing.

— Griner's arrest and imprisonment on drug charges became international sports and political news as the US tried to free the WNBA star. A deal was finally worked out in December, allowing Griner to return home after 10 months in prison.

RELATED: Brittney Griner lands back in US after Russian prisoner swap

— In Phoenix, Sarver made news for all the wrong reasons. He was suspended one year and fined $10 million on Sept. 13 by the NBA over workplace misconduct that included racist speech and hostile behavior toward employees. Sarver then announced his intention to sell the team.

— Snyder had problems of his own in the nation's capital with a House committee investigating hundreds of instances of sexual harassment by men at the top levels of the organization. The franchise was fined $10 million and Snyder hired a firm to look into his sale of the team.