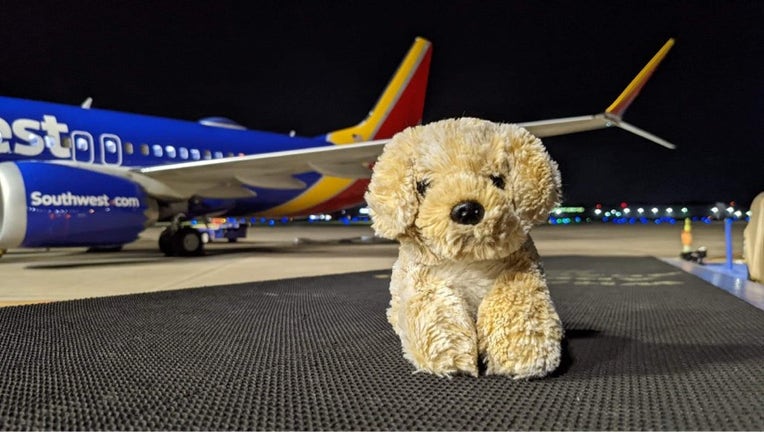 Dog Dog the stuffed animal and his adventures (Southwest Airlines)

When a mom and her little girl returned home from a trip to Dallas, they realized they left something important behind in a rental car: "Dog Dog," the child’s beloved stuffed animal.

Fortunately for Jessica and her daughter Luna, when Jessica called Southwest Airlines in the off chance someone there could help, a Southwest agent at Dallas Love Field Airport went the extra mile.

The agent, Christina, must have known how attached children can get to their stuffed toys. Christina drove to the rental car company to get Dog Dog herself, but the stuffed animal was still far from home. It would be a month before Dog Dog made it back to Luna — and Christina made sure Luna saw every stop Dog Dog made along the way.

The Southwest agent held on to Dog Dog and took photos of the stuffed toy on various "adventures." When Jessica and Luna returned to Dallas a month later and reunited with Dog Dog (likely for a trip that was already planned), Christina had made an adorable photo album for Luna to keep.

Dog Dog the stuffed animal and his adventures (Southwest Airlines)

Southwest customers praised the act of kindness on social media.

RELATED: Couple gets married on Southwest flight: 'Any turbulence, I want to weather it with you'

"I know beloved stuffies can be a huge thing!" one woman said in a comment on Southwest Airlines’ Facebook page. "Thankfully we have never left one - but it's been awfully close!"

"This is the cutest most loving thing this Southwest employee could do!" another commenter said. "God bless you."