The House adjourned on Jan. 4, 2023 after it failed for a sixth time to elect a speaker — continuing a feud between House Minority Leader Kevin McCarthy, R-Calif., and 20 opponents within his own party.

WASHINGTON - House Republicans flailed through a long second day of fruitless balloting Wednesday, unable to either elect their leader Kevin McCarthy as House speaker or come up with a new strategy to end the political chaos that has tarnished the start of their new majority.

Yet McCarthy wasn’t giving up, even after the fourth, fifth and sixth ballots produced no better outcome and he was left trying to call off a night-time session. Even that was controversial, as the House voted 216-214 — amid shouting and crowding —to adjourn for the night.

"No deal yet," McCarthy said shortly before that as he left a lengthy closed-door dinner-time meeting with key holdouts and his own allies. "But a lot of progress."

No progress at all was evident though the day of vote-after-vote-after-vote as Republicans tried to elevate McCarthy into the top job. The ballots were producing almost the same outcome, 20 conservative holdouts still refusing to support him, and leaving him far short of the 218 typically needed to win the gavel.

Explainer: What to expect on Day 2 of House speaker election after McCarthy falls short

House speaker not yet elected, TX Rep says 'its time to lock everyone in a room' | LiveNOW from FOX

In fact, McCarthy saw his support slip to 201, as one fellow Republican switched to vote simply present.

Seeing no quick way out of the political standoff, Republicans voted abruptly late in the day to adjourn for a few hours as they desperately searched for an endgame to the chaos of their own making. They were due back in the evening, but McCarthy wanted to take a break until Thursday.

"I think people need to work a little more," McCarthy said. "I don’t think a vote tonight would make any difference. But a vote in the future could."

But even a simple motion to adjourn erupted into a floor fight, with Democrats and some Republicans insisting on a lengthy vote.

McCarthy, the California Republican, vowed to fight to the finish for the speaker's job despite the grueling spectacle, unlike any in modern times, that threw the new majority into tumult for the first days of the new Congress. Animated private discussions broke out on the chamber floor and in huddled meeting throughout the Capitol between McCarthy supporters and detractors searching for an offramp.

She said, "To all Americans watching right now, We hear you. And we will get through this — no matter how messy."

But the right-flank conservatives, led by the Freedom Caucus and aligned with Donald Trump, appeared emboldened by the standoff — though Trump publicly backed McCarthy, 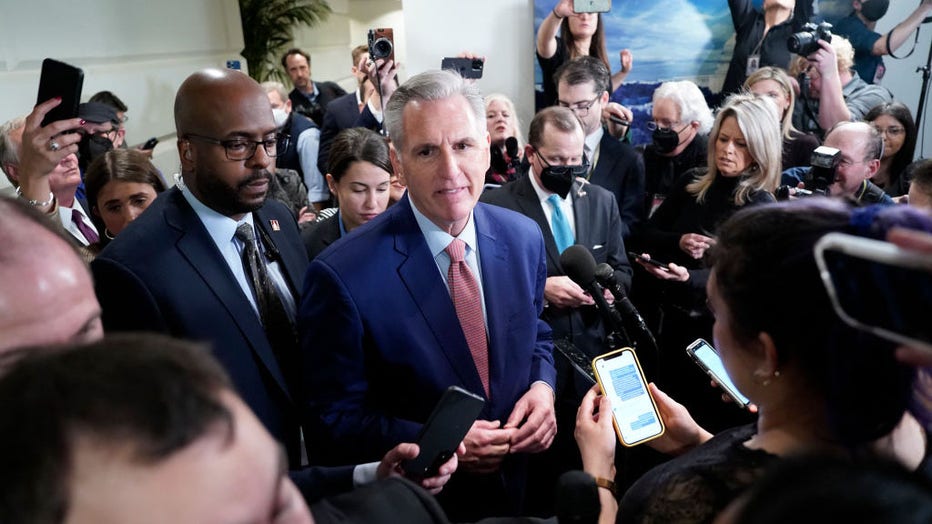 U.S. Rep. Kevin McCarthy (R-Calif.) speaks to the media after a Republican caucus meeting at Capitol Hill on the first day of the 118th Congress in Washington, DC. (Photo by Jabin Botsford/The Washington Post via Getty Images)

"This is actually an invigorating day for America," said Rep. Byron Donalds, R-Fla., who was nominated three times by his conservative colleagues as an alternative. "There’s a lot of members in the chamber who want to have serious conversations about how we can bring this all to a close and elect a speaker."

The House gaveled in at noon, but no other work could be done — swearing in new members, forming committees, tackling legislation, investigating the Biden administration — until the speaker was elected.

"I still have the most votes," McCarthy said at the start of the session. "At the end of the day, we’ll be able to get there."

But the dynamic proved no different from Day One, as Democrats re-upped their leader, Rep. Hakeem Jeffries, for speaker, and Donalds offered his challenge to McCarthy in another history making moment. Both Jeffries and Donalds are Black.

House Democrats have chosen Hakeem Jeffries to replace Nancy Pelosi in leadership. LiveNOW from FOX's Josh Breslow spoke with Dr. Darryl Paulson at the University of South Florida to break down the party's future.

"This country needs leadership," said Rep. Chip Roy, the Texas Republican noting the first time in history two Black Americans were nominated for the high office, and lawmakers from both parties rose to applaud.

It was the first time in 100 years that a nominee for House speaker could not take the gavel on the first vote, but McCarthy appeared undeterred. Instead, he vowed to fight to the finish.

The disorganized start to the new Congress pointed to difficulties ahead with Republicans now in control of the House.

Who is next to lead Democratic party after Pelosi steps away

Nancy Pelosi announced Thursday that she would step down from a leadership role with the Democratic party, leaving the door open for others in her party. Mariana Alfaro with the Washington Post spoke with LiveNOW from FOX's Josh Breslow about what's ahead.

President Joe Biden, departing the White House for a bipartisan event in Kentucky with Senate GOP leader Mitch McConnell, said "the rest of the world is looking" at the scene on the House floor.

"I just think it’s really embarrassing it’s taking so long," Biden said. "I have no idea" who will prevail.

Tensions flared among the new House majority as their campaign promises stalled out. Not since 1923 has a speaker's election gone to multiple ballots, and the longest and most grueling fight for the gavel started in late 1855 and dragged out for two months, with 133 ballots, during debates over slavery in the run-up to the Civil War.

A new generation of conservative Republicans, many aligned with Trump’s Make America Great Again agenda, want to upend business as usual in Washington, and were committed to stopping McCarthy’s rise without concessions to their priorities.

But even Trump's strongest supporters disagreed on this issue. Rep. Lauren Boebert, a firm Colorado conservative who nominated Donalds the second time, called on the former president to tell McCarthy, "`Sir, you do not have the votes and it’s time to withdraw."

Earlier Wednesday, Trump had done the opposite, urging Republicans to vote for McCarthy. "Close the deal, take the victory," he wrote on his social media site, using all capital letters. "Do not turn a great triumph into a giant & embarrassing defeat."

As the spectacle of voting dragged on, McCarthy's backers implored the holdouts to fall in line for the California Republican.

RELATED: 2024 contest comes into view with hurdles for Republicans and Democrats

"I do think members on both sides of this are getting a lot of pressure now," said Rep. Tom Cole, R-Okla. "So I think the message from home is, ‘Hey, sort this stuff out, we don’t have time for the small stuff and the egos.’"

The standoff over McCarthy has been building since Republicans won the House majority in the midterm elections. While the Senate remains in Democratic hands, barely, House Republicans are eager to confront Biden after two years of the Democrats controlling both houses of Congress. The conservative Freedom Caucus led the opposition to McCarthy, believing he’s neither conservative enough nor tough enough to battle Democrats.

To win support, McCarthy has already agreed to many of the demands of the Freedom Caucus, who have been agitating for rules changes and other concessions that give rank-and-file members more influence in the legislative process. He has been here before, having bowed out of the speakers race in 2015 when he failed to win over conservatives.

"Everything’s on the table," said ally Rep. Patrick McHenry, R-N.C. — except, he said, having McCarthy step aside. "Not at all. That is not on the table."

Democrats enthusiastically nominated Jeffries, who is taking over as party leader, as their choice for speaker. He won the most votes overall, 212.

If McCarthy could win 213 votes, and then persuade the remaining naysayers to simply vote present, he would be able to lower the threshold required under the rules to have the majority.

It's a strategy former House speakers, including outgoing Democratic Speaker Nancy Pelosi and Republican Speaker John Boehner had used when they confronted opposition, winning the gavel with fewer than 218 votes.

One Republican, Rep. Victoria Spartz of Indiana, voted present on multiple rounds, but it made no difference in the immediate outcome.