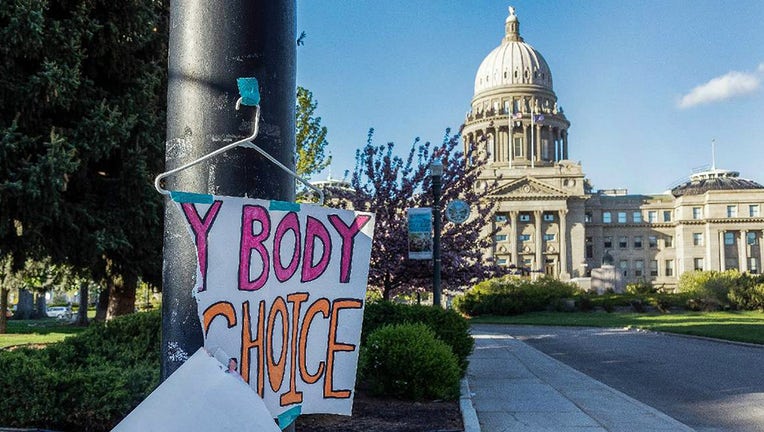 File: A sign taped to a hanger hangs near the Idaho Capitol in Boise after protests against the state's new abortion laws in November of 2022. (Sarah A. Miller/Idaho Statesman/Tribune News Service via Getty Images)

Idaho's Constitution does not implicitly enshrine abortion as a fundamental right, the state Supreme Court ruled Thursday as it dismissed a series of lawsuits brought by Planned Parenthood.

The ruling was a blow against those who are fighting Idaho laws that took effect in August, including one criminalizing all abortions after six weeks of gestation except to save a pregnant person’s life or because of rape or incest.

"This is a dark day for the state of Idaho. But our fight is far from over," Rebecca Gibron, CEO of Planned Parenthood Great Northwest, Hawaii, Indiana, Kentucky, said in a statement.

Planned Parenthood and a family physician brought three lawsuits against the governor and leaders of the Legislature in an effort to block new abortion bans. One of the laws allows the potential family members of a fetus to sue a health care professional who performs an abortion. Another made it a crime for medical professionals to perform an abortion after electrical activity is detected. And a third effectively banned all abortions but allowed doctors to defend themselves in court by proving that the abortion was done to save the life of their patient.

The Idaho Supreme Court heard arguments for all the lawsuits in a joint hearing last year. Thursday's ruling applied to all three of the cases.

Planned Parenthood claimed the laws offend constitutional principles such as equal protection and due process, the high court justices noted.

But a majority of the justices said in the ruling that the state Constitution offers no fundamental right to abortion.

"Since Idaho attained statehood in 1890, this Court has repeatedly and steadfastly interpreted the Idaho Constitution based on the plain and ordinary meaning of its text," the justices said.

If they made the jump and concluded that the document implicitly protected abortion rights, the Constitution "would be effectively replaced by the voice of a select few sitting on this Court," the justices maintained.

Idaho Supreme Court Justices Colleen Zahn and John Stegner dissented with the majority’s opinion. Zahn said, "Idaho’s Constitution did not freeze rights as they existed in 1890."

"We should look to Idaho’s history and traditions to determine the framers’ intent but not be locked into examining those rights only according to the circumstances in which they existed circa 1890," Zahn wrote.

In his dissent, Stegner noted the impact pregnancy has on women, saying the majority opinion "strips Idaho's women of their most basic rights."

"Idaho women have a fundamental right to an abortion because pregnancy — and whether that pregnancy may be terminated — has a profound effect on pregnant women's inalienable right to liberty, as well as their rights to life and safety," Stegner wrote.

The Idaho bans have increased pressure on abortion facilities in neighboring Oregon, where abortion rights are protected.

In South Carolina, the state Supreme Court on Thursday struck down a ban on abortion after cardiac activity is detected, ruling the restriction violates a state constitutional right to privacy.

The South Carolina court said the state has the authority to limit the right of privacy that protects a woman from state interference with her decision, but any limitation must afford a woman sufficient time to determine she is pregnant and "take reasonable steps to terminate that pregnancy."

The Idaho Supreme Court said its case was narrowly focused.

"All we are deciding today is that the Idaho Constitution, as it currently stands, does not include a fundamental right to abortion," Justice Robyn Brody wrote in the majority opinion.

The Idaho laws came about after the U.S. Supreme Court last year overturned the Roe v. Wade decision, which guaranteed a right to abortion under the U.S. Constitution.

A narrow portion of one of Idaho's abortion bans has been temporarily blocked by a federal judge in a separate case.

Planned Parenthood said the court's ruling would especially affect people who already face the greatest barriers to health care because of a legacy of racism and discrimination, including people of color, people with low incomes, immigrants and others.