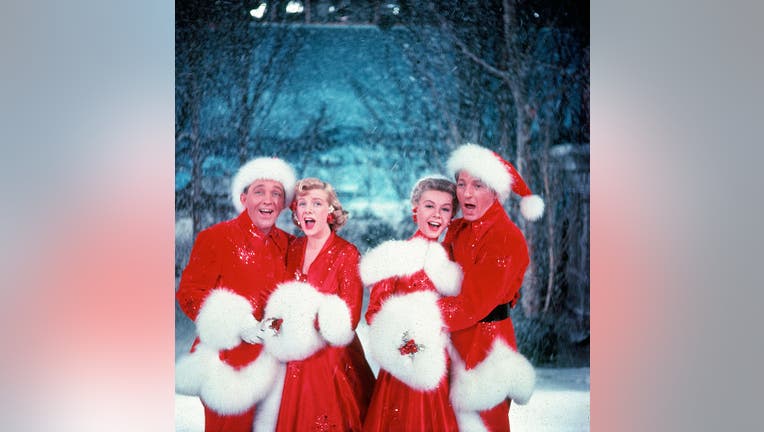 As a winter storm is set to blanket much of the nation in snow, many Americans will indeed experience a white Christmas.

When those first few notes of the song "White Christmas" begin to play, your heart begins to melt. Then, the textured tones of Bing Crosby’s crooning voice fill the air and wrap around you like a warm blanket.

"White Christmas" is one of the most iconic songs of the holiday season, and it’s easy to see — and hear — why. In fact, many artists, from Elvis and The Supremes to Dolly Parton and the Flaming Lips, have created their own renditions, paying homage to the nostalgic tune.

But woven within that tune are whispers of the time, a time of global change and uncertainty, and how Hollywood and musical legends found a way to create a wistful escape. 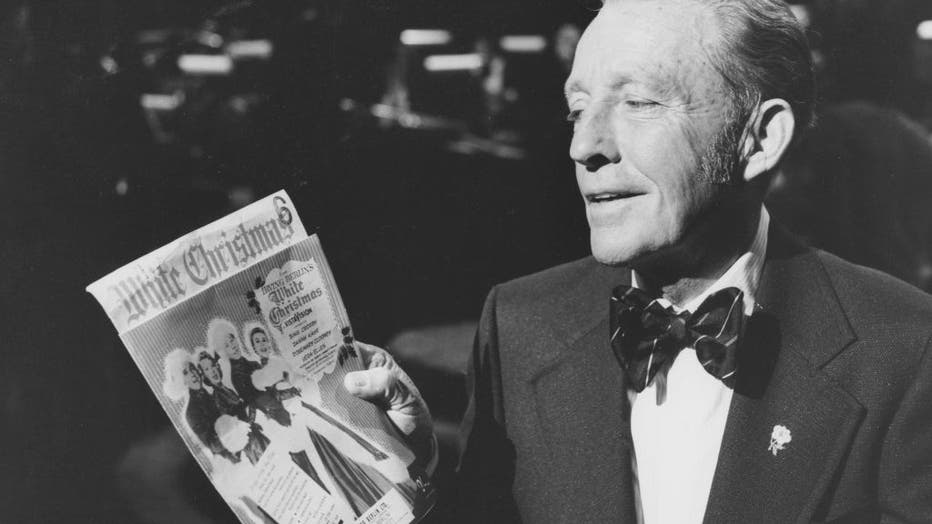 It seems only fitting that the melancholy melody of the holiday tune was sung by one of the most beloved voices of the 20th century.

"At the time that Bing Crosby recorded ‘White Christmas,’ he was really the biggest star in the country, perhaps in the world," said Matthew Barton, the curator of recorded sound at the Library of Congress.

"He was a huge success on records, he had a weekly radio show, and he was a major film star," Barton added. "He really was just a towering figure and had been for a number of years." 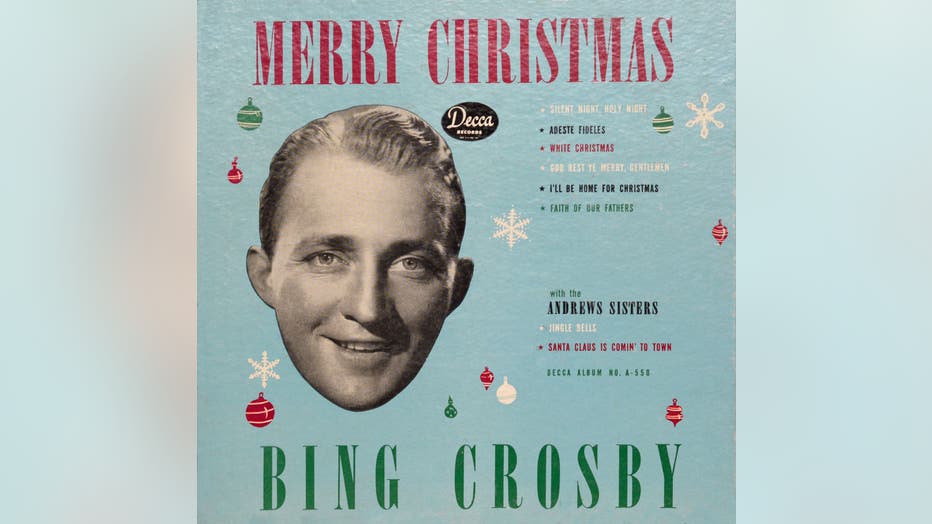 According to Barton, Crosby had already been recording Christmas songs as a band singer in the late 1920s, and then he recorded the songs on his own in the 1930s.

"They were big hits," Barton said. "And they became hits again every winter."

HOW WEATHER CAN CHANGE THE SHAPE - AND SOUND - OF MUSICAL INSTRUMENTS

"[Crosby’s] voice, his personality were very much, very closely associated with Christmas and Christmas music at the time," Barton added.

The man behind the curtain 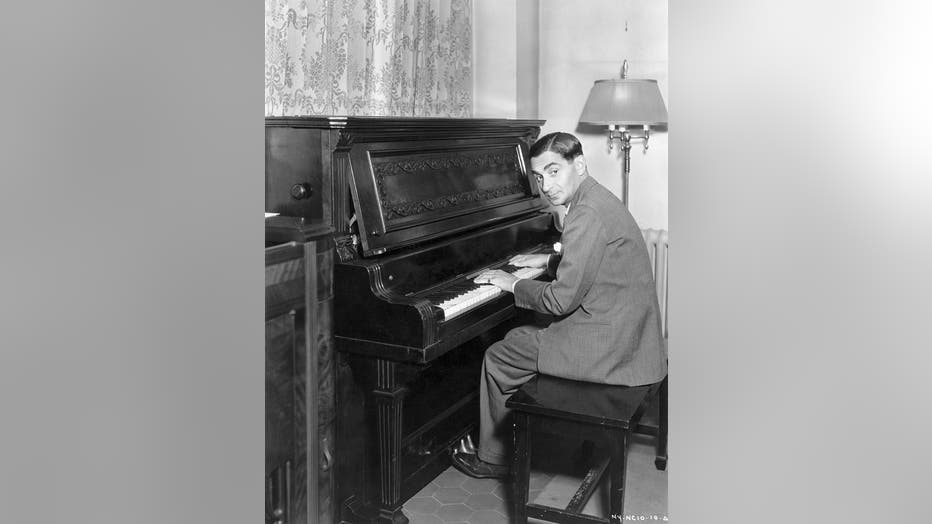 While Crosby might be the most recognizable name associated with "White Christmas," another cultural heavy hitter was behind the song’s creation: Irving Berlin.

"Berlin wrote constantly," Barton said. "It was not unusual for him to have quite a few songs just on hand if the occasion demanded them."

According to Barton, Berlin wrote "White Christmas" in late 1939-early 1940 – by that point, he had been writing hit songs for more than 25 years.

DREAMING OF A WHITE CHRISTMAS? HOLLYWOOD MAKES IT LOOK EASY 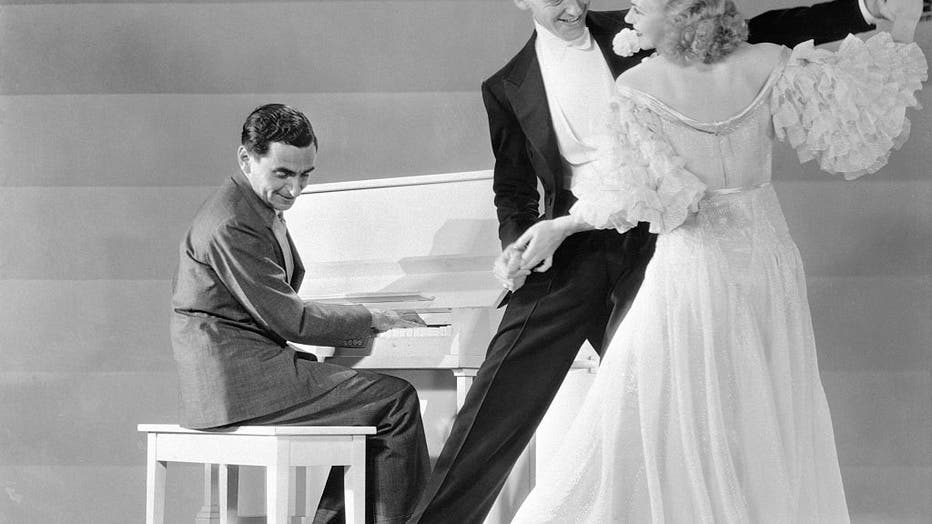 "['White Christmas'] came from an idea he'd had several years earlier to do a musical revue, a series of numbers built around days in the year — holidays, specifically important days."

Berlin, who had also recently written "God Bless America" by that point, presented his idea for a holiday musical revue to Hollywood film director Mark Sandrich.

"They started developing a whole story which you can now see in the film ‘Holiday Inn,’ which is sort of framed by the song ‘White Christmas,’" Barton said. 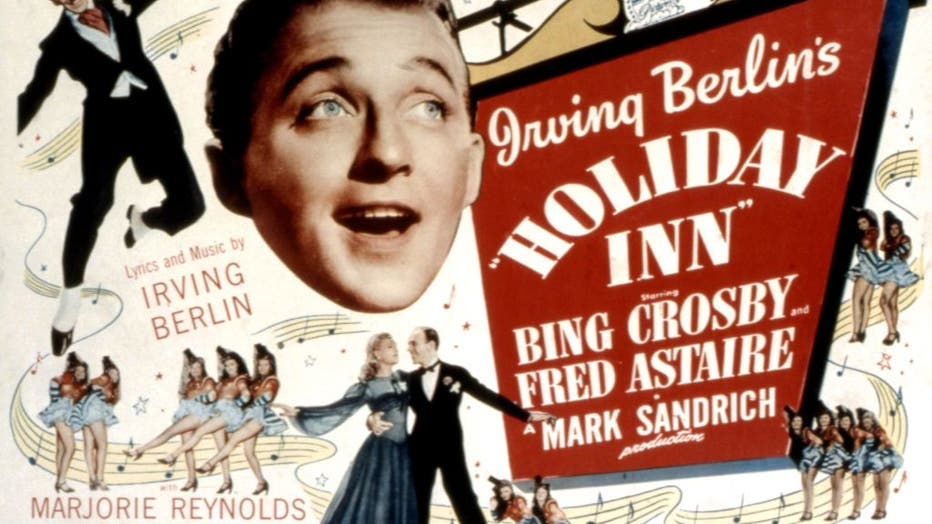 When "Holiday Inn" was released in August 1942, it was an instant hit — and so was "White Christmas," despite the movie’s summer premiere.

"It wasn't really a seasonal song, but that was the one that clicked with people," Barton said. "It was just obvious from the get-go."

"Berlin said he knew it all along," he added. "He thought it was the best thing he'd written to that point."

By September, the popularity of "White Christmas" grew, as evidenced by growing sales of the song’s sheet music. 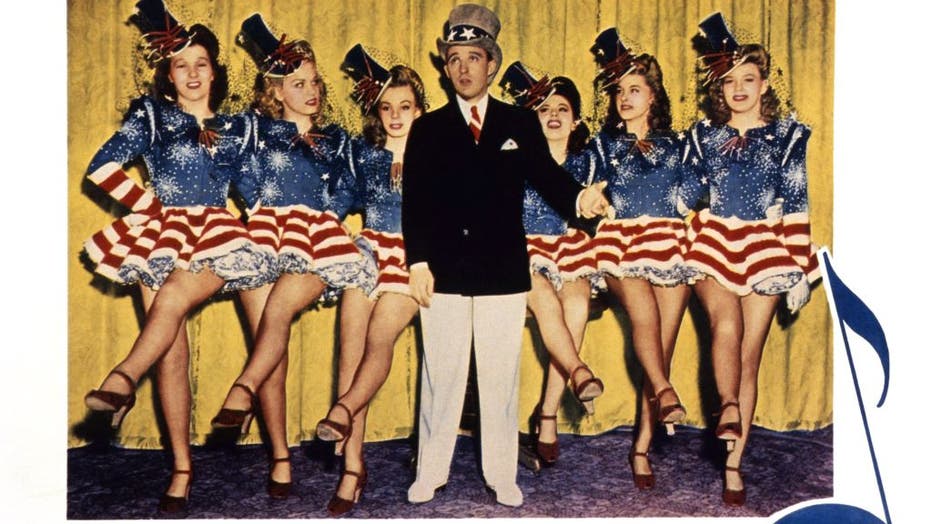 Come October, it tops the charts.

"You've got a Christmas song, and it's number one in October — I'm not sure that anyone else has ever accomplished that," said Barton.

According to Barton, "White Christmas" remained at No. 1 for three months. 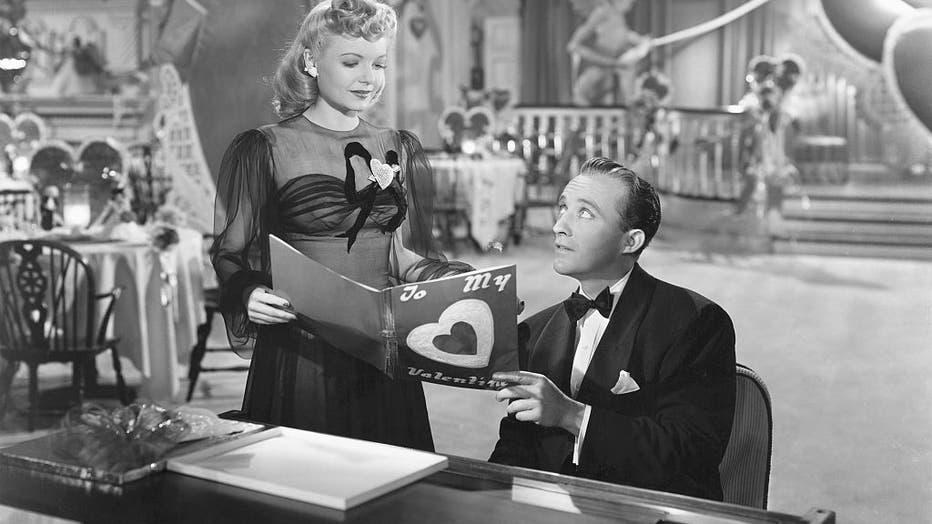 Linda Mason (Marjorie Reynolds) joins Jim Hardy (Bing Crosby) at the piano to look at a Valentine in his nightclub the Holiday Inn in the 1942 musical Holiday Inn. (Photo by �� John Springer Collection/CORBIS/Corbis via Getty Images)

Probably one of the most striking aspects of the song’s popularity is its somber, nostalgic sentiment.

In "Holiday Inn," Bing Crosby's character is down on his luck on Christmas Eve as he dreams of a white Christmas.

BEFORE ‘FROSTY’: THE HISTORY OF THE MODERN SNOWMAN

"If you see the film, you know it's very much about the loss and loneliness that he's feeling at the time," Barton said. "It just invokes this image of being so far from where you want to be."

This image is also set upon a dark backdrop outside the movie.

When Berlin wrote "White Christmas" in late 1939-early 1940, the country was right on the heels of the Great Depression and on the cusp of World War II.

"The war had started, but we weren't in it," Barton said. "It was something that's very much in the headlines and very much on people's minds."

By the time "Holiday Inn" premiered with "White Christmas" in tow in 1942, the U.S. had joined the war.

According to Barton, the country's involvement may have informed how Crosby sang the song, what he was thinking about and how people listened to the song. 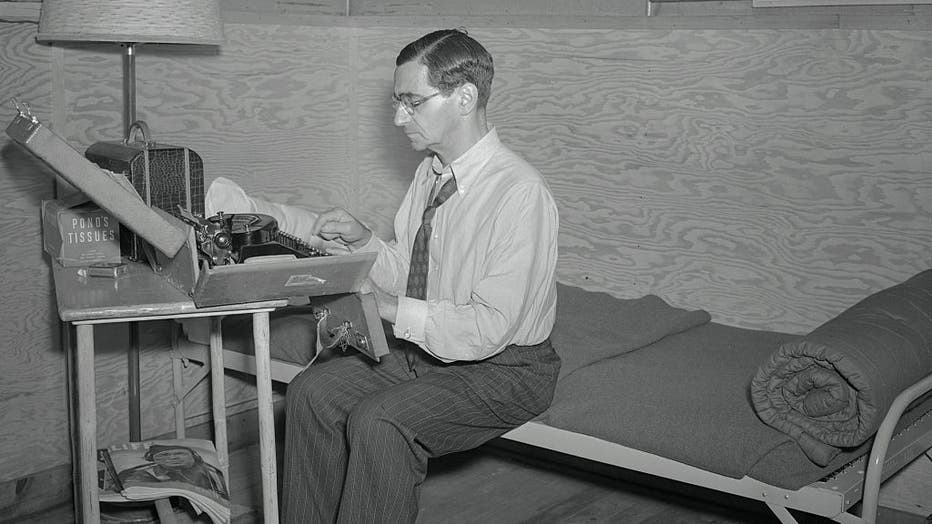 (Original Caption) Irving Berlin, hard at work on the score of "This Is The Army," is seen in his quarters at Camp Upton, where for week's he has given all of his time to the show, which he expects to be a bigger hit than his show of World War I days

For Berlin, the inspiration for writing such a somber song may have been influenced by his own feelings of loneliness.

"He was a show business veteran of many decades, and it was not unusual for him to be away from home or to be working long days that everybody else was just relaxing and enjoying themselves," Barton said.

According to Barton, Berlin also had sad memories of Christmas Day, as he had lost an infant son on the holiday.

"He said that he visited that son's grave every year on the 25th of December," Barton said.

Berlin was also well aware of the universal nature of distance and loss, whether of loved ones or of times long past, and hoping for a brighter future.

The canon of culture 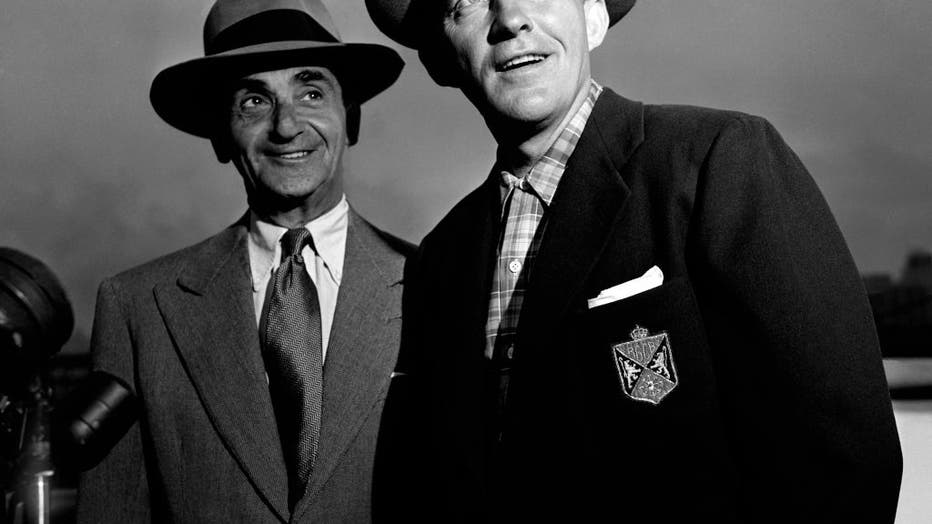 American composer, lyricist and songwriter Irving Berlin (1888-1989) and American singer, comedian and actor Bing Crosby (1903-1977) pose for a portrait on the RMS Queen Elizabeth while arriving from Europe on June 14, 1950 in New York, New York. (Ph

Nearly 80 years have passed since "Holiday Inn" introduced the public to "White Christmas" — a song that has resonated with countless listeners worldwide.

In 2002, it became one of the first songs added to the Library of Congress’s National Recording Registry.

According to Barton, the registry is an ongoing initiative of the Library of Congress to recognize and draw attention to, popularize and promote the preservation of recordings that are historically, aesthetically and technically significant.

HOW ‘SINGIN’ IN THE RAIN' CAPTURED SUCH A GLORIOUS FEELING

Given the significance of "White Christmas," its placement in the registry comes as no surprise.

"I feel that any good music, good records, that there's always a good story behind them," Barton said. "And that's certainly the case with White Christmas."