A coast-to-coast storm looms from this weekend into next week, and the impacts are expected to be significant along its journey across the country. That includes the potential for a dangerous severe weather outbreak in the South and a significant winter storm in the northern Plains and Upper Midwest that could bring heavy snow and blizzard conditions.

The powerful storm will get underway this weekend when a large upper-level low-pressure system is forecast to bury many western mountains in feet of snow. It will then punch eastward early next week into the central U.S., where it will receive an injection of moisture streaming north from the Gulf of Mexico. 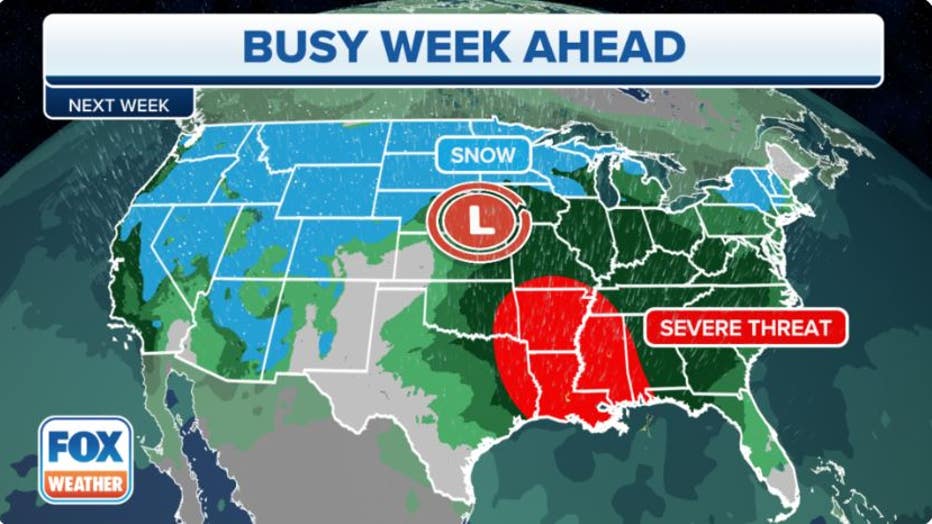 A coast-to-coast storm will bring a variety of impactful weather as it tracks across the country next week.(FOX Weather)

"All of the ingredients are slowly but surely coming into place for what could be a potential severe weather outbreak across parts of the southern Plains and lower Mississippi Valley," FOX Weather meteorologist Michael Estime said. "That, of course, going to be impacting places like Memphis, Tennessee; Little Rock, Arkansas; our friends in the capital of Louisiana – by the way, that's going to be Baton Rouge – Shreveport (Louisiana) and Texarkana (Texas)."

Some of the specific details still need to get ironed out over the coming days, but here's a general overview of what to expect from both the severe side and the wintry side.

On Tuesday and Wednesday, a strong cold front associated with the area of low pressure will sweep east from the southern Plains into the lower Mississippi Valley and central Gulf Coast, providing the trigger for thunderstorm development as it pushes through a warm, humid air mass engulfing the region.

The threat of severe weather will begin Tuesday from East Texas and southeastern Oklahoma into far southern Missouri, Arkansas, Louisiana, western Mississippi and extreme southwestern Tennessee. That includes Little Rock in Arkansas, Baton Rouge, New Orleans and Shreveport in Louisiana, Greenville and Jackson in Mississippi and Memphis in Tennessee.

Within that region, there could be an even higher potential for severe weather in the area shaded in the darkest red on the map below, which includes southern Arkansas and northern Louisiana.

According to the FOX Forecast Center, tornadoes, damaging winds and large hail will all be possible, with the threat of dangerous storms continuing through the overnight hours and into early Wednesday morning.

HOW YOU SHOULD PREPARE FOR A TORNADO 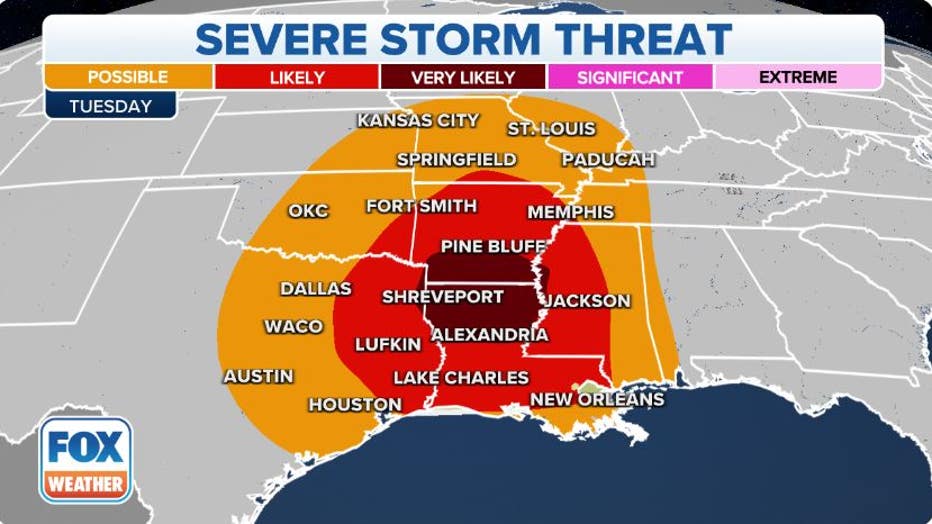 Nighttime tornadoes are more than twice as likely to result in deaths than those that happen during the day because many people are asleep and caught unaware when a dangerous twister might be headed in their direction.

Make sure you have multiple ways of receiving potentially life-saving weather alerts issued by the National Weather Service, including one that will wake you up during the night.

As this system moves farther east, additional severe thunderstorms are expected to fire up Wednesday from southeastern Louisiana into southern Mississippi and southwestern Alabama during the day. The severe weather threat could then continue into the overnight hours in the Florida Panhandle.

Once again, tornadoes, damaging winds and large hail will all be possible with Wednesday's round of storms. Cities at risk of severe thunderstorms include Baton Rouge and New Orleans in Louisiana, Gulfport and Biloxi in Mississippi and Mobile in Alabama. 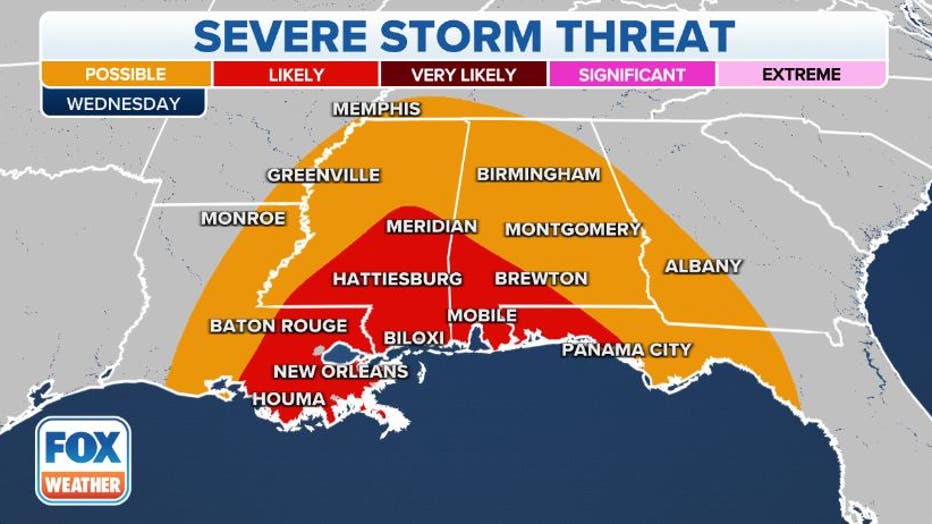 After the storm dumps feet of snow across the western mountains this weekend, it will spread heavy snow and high winds into the northern Plains and Upper Midwest beginning late Monday or early Tuesday and may linger over parts of those regions into at least the middle of next week.

According to the FOX Forecast Center, the snow will likely peak in intensity from Tuesday night into Wednesday, when snowfall rates could exceed an inch per hour.

Wind gusts between 40 and 60 mph will accompany the heaviest snow, which might result in dangerous blizzard conditions with near-zero visibility across portions of Montana, Wyoming, Colorado, western Nebraska, the Dakotas and Minnesota.

"That's blowing or falling snow with winds of at least 35 mph, and the visibility will reduce to about a quarter-of-a-mile or less for three hours," FOX Weather meteorologist Craig Herrera explained. "That is a blizzard, and that could potentially happen."

WHAT MAKES A BLIZZARD DIFFERENT FROM AN ORDINARY SNOWSTORM? 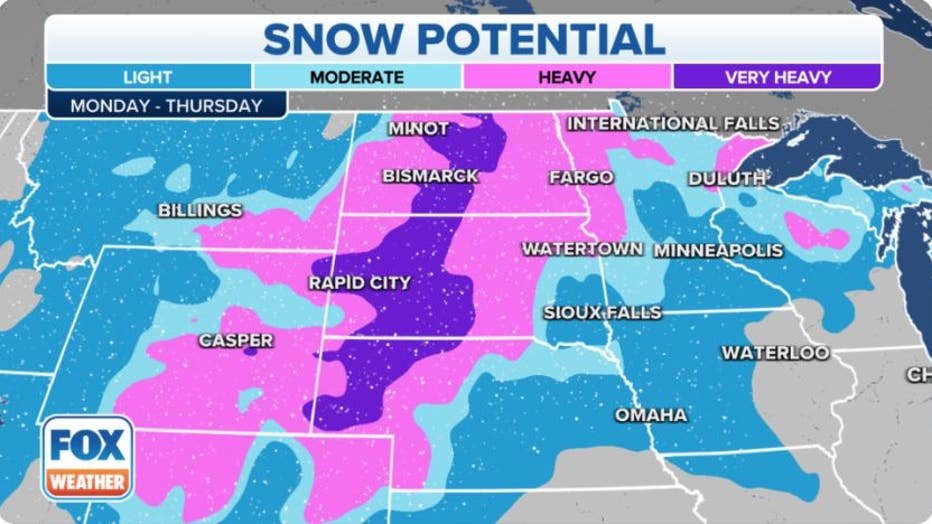 The winter storm should gradually weaken and wind down during the second half of next week, though a few lingering snow showers could stick around into Thursday or Friday.

Details on who sees the heaviest snow will become clearer as the storm draws closer. Be sure to check back with FOX Weather for updates.